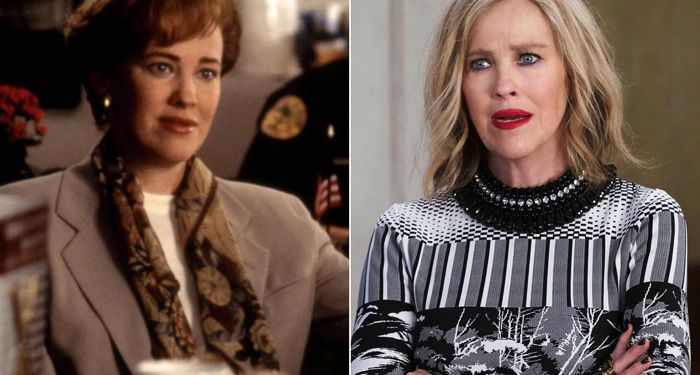 I can’t think of a single person I know who doesn’t adore Catherine O’Hara. You adore her. My best friend adores her. My spouse adores her, our children adore her. I myself am wearing a sweatshirt with her face on it as I type this. (Of course I can’t find it now, but it’s very similar to this one!)

Born March 4, 1954, Catherine Anne O’Hara was a member of the Second City comedy group in the 1970s and a founding cast member of their television experiment, SCTV. She has gone on to have a decades-long career in motion pictures, television, and other media. She is a beloved household name, whether you know her by her own name or as Delia Deetz, Moira Rose, Cookie Fleck, or Mrs. McAllister.

She’s been in many book adaptations, but from SCTV to A Mighty Wind, a great deal of her most famous roles are improvisational — in some ways the opposite of bookish, in that the brilliant dialogue is not written ahead of time, but in another, more compelling way, extremely bookish in that she writes her own dialogue, though she says her lines rather than writing them down. In her own words, “The scripts — the dialogue is not written. There were great running jokes in the outline [but] the dialogue wasn’t there. So each person, each actor that came in to work was just speaking from their own character’s heart and soul.”

Even as early as SCTV, O’Hara played characters based on other bookish figures. Of the many celebrities she impersonated on that series, some were authors first — Julia Child, Rona Barrett — and many were actors who had also written and/or been the subject of books — Lucille Ball, Katharine Hepburn, and Gilda Radner among them.

Over her nearly 50-year career, she’s also played a lot of roles based directly on books. She played a small role in Dick Tracy (1990) as Texie Garcia and voiced Mrs. Prysselius in Pippi Longstocking (1997). She was Justice Strauss in the movie A Series of Unfortunate Events (2004) and was the only cast member to also appear in the series based on the same books in 2017, as Dr. Orwell. She also loaned her voice to Where the Wild Things Are (2009), The Magic School Bus Rides Again (2018), and The Addams Family (2019). And she will appear in the upcoming movie Argylle, based on the novel by Ellie Conway.

And it isn’t just movies and television where you can hear her voice — she’s also narrated several audiobooks. From the Children’s Classics line of fairytales and stories including Alice in Wonderland to Finn McCool, you can listen to her reading your favorite children’s story.

It could be argued that the pinnacle of Catherine O’Hara’s bookish life is the way she played Moira Rose, an aging former soap star who’d lost everything but her pride. Series creator Dan Levy had sketched out the basis of the character, but she truly came to life when Eugene Levy suggested O’Hara for the role. With O’Hara in the party, Moira quickly evolved into the character viewers grew to love. But it’s thanks to Lucky Bromhead, a makeup artist on the series, that Moira’s vocabulary became what it was. Bromhead gave O’Hara a copy of Foyle’s Philavery: A Treasury of Unusual Words and, O’Hara says, “Daniel and the writers would write me dialogue and I’d go through my book and rewrite it and make it that much more Moira.”

If you just can’t get enough of Moira Rose’s vocabulary, Catherine O’Hara went live on Instagram in April 2020 to give a language lesson. The live show was recorded for posterity, and the lovely folks at Schitt’s Creek Rewatch wrote out the vocabulary list.

And of course, you can read Best Wishes, Warmest Regards: The Story of Schitt’s Creek by Dan and Eugene Levy for more Moira Rose and Catherine O’Hara bookish goodness.

Or perhaps you’d like to write your own book while you consider what a bookish life she’s lead. There’s a notebook for that: Sorry I wasn’t listening I was thinking about Catherine O’Hara.