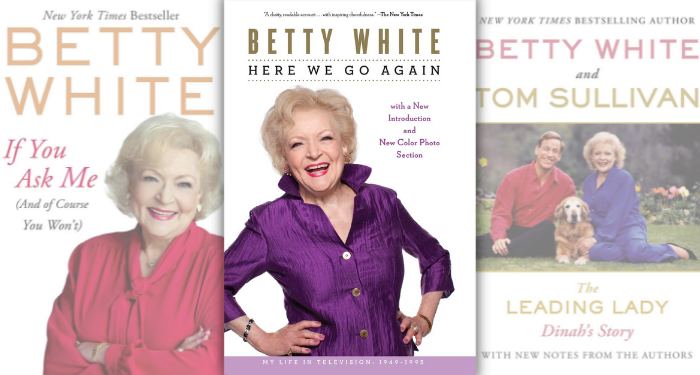 Betty Marion White was born January 17, 1922, in Oak Park, Illinois, and grew up in the Los Angeles area. From a young age, she wanted to be a forest ranger, but women were not allowed in the forest service at the time so she decided to pursue a writing career. In the course of that pursuit she discovered a love of performing, and for about 80 years the world was blessed with Betty White, actress and comedian. And of course, she also kept writing.

When Betty White died on her 100th birthday (we all agree that the announcement of her death on December 31, 2021, was premature by 18 days, right?) the world mourned, but we also celebrated the storied and bookish life she led.

She was not only an actress, but one of the first female television producers: her show Life With Elizabeth came on the air the year after I Love Lucy, which was also produced by its (female) star. A few years later she hosted the daytime series The Betty White Show, in which she talked with celebrity guests, sang with an orchestra, and more. When viewers in the south complained about her featured dancer Arthur Duncan, who is Black, she responded “He stays; deal with it,” and proceeded to give him more air time. Her show was canceled, but Duncan went on to a very successful career including being the first Black member of Bob Hope’s USO troupe and making regular appearances on The Lawrence Welk Show. He went on to act in movies such as The Cotton Club and Tap, and to appear extensively on stage. Duncan and White were reunited in 2017 on the show Little Big Shots: Forever Young, and her fight to keep him on television is covered in the book Betty White on TV as well as in White’s autobiography Here We Go Again, in which she revisits her early TV career years.

Surprisingly few of White’s 125+ acting roles were in bookish properties, though many were book-adjacent, such as voicing Yoshie in the American dub of Ponyo. She did also add her voice to the animated adaptation of The Lorax, an animated Tom Sawyer, and Disney’s Hercules TV series.

Betty White loved animals, which is such an understatement that I am embarrassed to have typed it. She dedicated a significant portion of her life to working with various organizations dedicated to animal health and welfare, including with the Los Angeles Zoo, Friends of Animals, the Morris Animal Foundation. She collaborated with LA Zoo photographer Tad Motoyama on the book My Life at the Zoo, combining her words with his images. She also wrote The Leading Lady: Dinah’s Story, a biography of a guide dog, with blind actor Tom Sullivan, and they co-wrote a novel, Together: A Story of Shared Vision.

In addition to appearing on several game shows over the years — including The Hollywood Squares, To Tell the Truth, Password (which she co-hosted), and Match Game — White was an avid cruciverbalist, solving crossword puzzles daily to keep her mind sharp.

I am interested in a lot of things — not just show business and my passion for animals. I try to keep current in what’s going on in the world. I do mental exercises. I don’t have any trouble memorizing lines because of the crossword puzzles I do every day to keep my mind a little limber. I don’t sit and vegetate.

I love words. Sudoku I don’t get into, I’m not into numbers that much, and there are people who are hooked on that. But crossword puzzles, I just can’t — if I get a puppy and I paper train him and I put the – if all of a sudden I’d open the paper and there’s a crossword puzzle — “No, no, you can’t go on that, honey. I’ll take it.”

Betty White wrote two additional autobiographies: If You Ask Me (And Of Course You Won’t) and Betty White In Person. She narrates her own audiobooks. And if you need even more books about Betty White, try How to Be Golden: Lessons We Can Learn from Betty White by Paula Bernstein.

And…she was made an honorary forest ranger by the United States Forest Service.