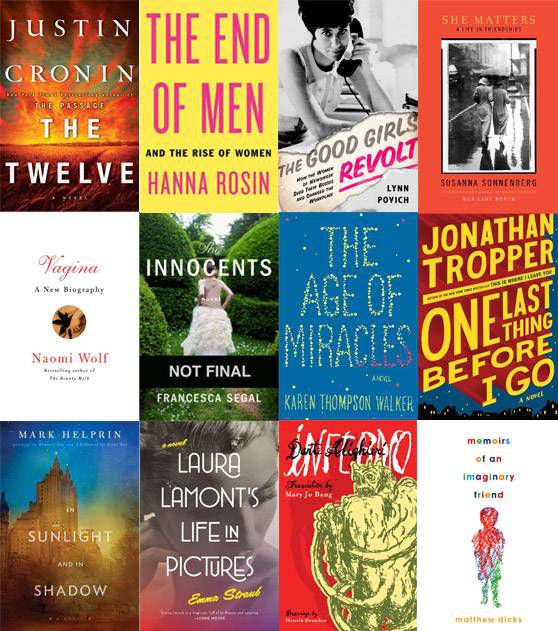 The Editors’ Buzz panel, in which six editors each present their most highly anticipated title for fall, is Book Expo America’s signature kick-off event and the launchpad for books readers will be talking about for months to come. You might have heard of a few of the ones featured last year–little books like The Night Circus, The Art of Fielding, and We the Animals. Here, our contributors share their own can’t-wait-to-read-it discoveries of BEA.

I’m not at BEA this year, but if I was, the two books I’d be beelining for–barrelling like a linebacker, stepping on feet, jabbing booksellers aside with my elbows–are novels which already perch high atop my Must Read list for 2012: The Twelve by Justin Cronin (Ballantine Books, October 2012) and Laura Lamont’s Life in Pictures by Emma Straub (Riverhead, September 2012). Post-apocalyptic epidemics and the Golden Age of Hollywood may seem like odd bedfellows, but those are definitely two of my most-wanted books at BEA. Fortunately, I was able to download advance copies of both books on NetGalley from the comfort of my home here in Montana. No booksellers were harmed in the process.

I am such a fan of Winter’s Tale, by Mark Helprin, that I would have curbstomped a kitten for a copy of his newest one, In Sunlight and in Shadow (Houghton Mifflin Harcourt, October 2012). Luckily, it didn’t come to that – the nice people at HMH gave me one when I asked, without me having to so much as bare my canine teeth at them. Helprin’s novels are usually hefty tomes, and this one is no exception – it’s a 700-page post-WWII tale about the romance between a paratrooper and an heiress. I know, I know: Kissing parts – yuck. Amiright? But not when they’re done by Helprin. His writing is magic. So excited to eat this one.

My other choice from BEA 2012 is The Middlesteins by Jami Attenberg (Grand Central Publishing, October 2012). I admit, I have already read it, but I went to her signing because I wanted another copy to share, because I LOVE it so much. (And I’m not letting other people touch my copy, ew.) Seriously, I’m going to handsell the hell out of this book. It’s beautiful and funny, it moves in a nonlinear manner in a really awesome way, and she makes wise observations and commentaries on family and food that someone smarter than myself could do a better job of explaining here. I’ll just give you the short review: ‘OMG, it’s soooo good!’ *muppet arms*

I’ve already declared that 2012 is the year of books about ladyparts and explained why I’m superstoked for Naomi Wolf’s Vagina: A New Biography (Ecco, September 2012). It’s the only book I waited in line for this week, but I’m not the only Rioter who wants to buzz about it, so I’ll move on to two other picks.

First up is She Matters: A Life in Friendships by Susanna Sonnenberg (Scribner, January 2013). There’s a lot of talk in our culture about how important and life-affirming women’s relationships with other women are (I recall this being a favorite topic for Cosmo, and for Oprah and her bestie Gayle King), but I rarely come across depictions of female friendships in literature that resonate with my own experiences. Catfights and drama might be the stuff of pageturners, but they’re (I hope) not the norm for most of us, and I’m excited that a writer whose previous work I’ve enjoyed is stepping up to talk about what friendships between real women look like and what they do in and for our lives.

I said, “That is so cool” a hundred times this week if I said it once, but never with so much feeling as when the folks at Graywolf Press revealed their new translation of Dante’s Inferno, coming in August. The book just looks gorgeous, it comes complete with illustrations that incorporate characters from present-day pop culture (think Cartman from South Park) in Dante’s original circles of Hell.

There were an abundance of amazing books at BEA this year, and several biggies I was excited for like The Twelve by Justin Cronin and Gone Girl by Gillian Flynn (out now!) are already on most people’s must lists. But several books that were under the radar a bit really caught my eye as ones to watch. The first is Karen Thompson Walker’s The Age of Miracles (Random House, June 26, 2012), which has a supernatural premise – the world is slowing down with every rotation – but it is also just a book about people and how they adapt to extraordinary uncertainty.

The second book I’m really excited for is Memoirs of an Imaginary Friend by Matthew Dicks (St. Martin’s Press, August 2012). Dicks’ title explains exactly what the book is about – the life story of 8-year-old Max’s imaginary friend Budo, who has been “alive” for five years, an eternity in imaginary friend years. The creative premise is enchanting and the fact that Dicks is also an elementary school teacher makes me think this novel will be pitch perfect and authentic.

If I had to perform various violent acts in the pursuit of one galley, it would be Justin Cronin’s The Twelve. I’ve heard that it’s Lord of the Rings: The Two Towers good as far as sequels goes, and even has its own version of a battle of Helm’s Deep. So. That’s pretty kick-ass. I was also excited to stand in line for Naomi Woolf’s Vagina (even the line experience was awesome and included an old man walking up and down going IS THIS THE VAGINA LINE? IS THIS BOOK ABOUT VAGINA?). Lastly, I am looking forward to Francesca Segal’s The Innocents, a modern re-telling of Edith Wharton’s The Age of Innocence.

1. The Good Girls Revolt: How the Women of Newsweek Sued their Bosses and Changed the Workplace by Lynn Povich (September 10, 2012)–Author Lynn Povich was one of 46 female Newsweek employees who filed an EEOC complaint against the magazine in 1970, charging their employer with “systematic discrimination” when it came to hiring and promotions. The book takes a look at how cultural changes in that decade helped these women stand up for themselves, and what it has meant for employees today.

2. The End of Men: And the Rise of Women by Hanna Rosin (Riverhead Books, September 11, 2012)–Hanna Rosin made waves in 2010 with a big feature in The Atlantic (and a great TED Talk) with the same title that argued that although men have historically been the dominant sex, women are starting to pull ahead in most every measure. In the book, Rosin expands on her argument to look at the implications this gender shift could have for work, children, marriage and more.

1. One Last Thing Before I Go by Jonathan Tropper (Dutton Adult, Aug. 21st) — This was THE ONE galley I came to BEA to get. The story — about a guy whose ex-wife is about to remarry, and whose teenage daughter is pregnant — sounds like vintage Tropper. Tropper has gotten progressively better with each book, so my hopes are very high for this.

2. The Revised Fundamentals of Caregiving by Jonathan Evison (Algonquin Books, Aug. 28) — Evison, the author of the incredibly good West of Here, publishes this tale of a down-on-his luck fella caring for a guy with Duchenne Muscular Dystrophy. Check out the early buzz on Goodreads — very, very positive.