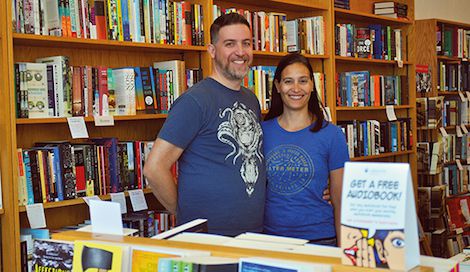 Sponsored by Children of Blood and Bone by Tomi Adeyemi.

He thought maybe he could help with the Book Catapult. He had worked there a few times when his friends first opened the store, in late 2017. He still had the keys, he knew how to work the register. He could try to keep it afloat.

“I thought, ‘I’ll pretend this is my store for the week,’ ” Ehrig-Burgess said.

He started calling mutual friends in the book-selling community to tell them that Marko was in surgery.

“People were like, ‘What can I do to help? Do you need somebody to be in the store?’ ” Ehrig-Burgess recalled. “I called four booksellers and had four volunteers.”

This is a feel-good story.

The Museum of English Rural Life (MERL) is dedicated to exploring the English countryside, its history, its people – and now bats. Their Twitter account, known for its dark, dry humor, tweeted out last fall that they had made a discovery in their rare book store that didn’t quite fall under the usual artifact categories. Hovering in the corner above the fire exit was an adorable, black bat that had wandered in accidentally – probably not to do some light reading. Fortunately for the small creature, the staff of the MERL was better equipped to deal with the animal than Dwight was on The Office. The staff phoned up Rose-Ann Movsovic, a retired librarian, MERL volunteer, and licensed bat worker. To the delight of the internet, the entire bat mission was live-tweeted in typical, entertaining MERL style.

What a fabulous story.

____________________
Geremy Jasper, the director of the Sundance sensation Patti Cake$, has signed on to direct The Night Circus, Lionsgate’s adaptation of the best-selling fantasy novel by Erin Morgenstern.

David Heyman, the producer behind the Harry Potter movies, is producing with Jeffrey Clifford (I Love You, Man) via Heyman’s Heyday Films banner. Tim Palen is also producing under his Barnyard Projects banner.