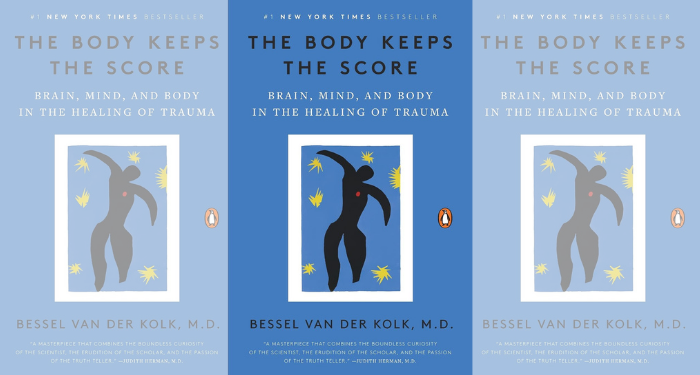 Back when the nonfiction book about trauma The Body Keeps the Score by Bessel van der Kolk was first published, the world looked pretty different. On its release date of September 25, 2014, Obama was midway through his second term as President; no one had heard of COVID-19 yet; and the buzzy novels of the year so far included All the Light We Cannot See and Station Eleven. But now, seven years later, it’s The Body Keeps the Score that has shot to the top of the bestsellers. Why?

The Surge in Popularity

This popularity is echoed on Amazon. I was #4 on their list of most sold nonfiction books for the week of September 26, 2021. The Body Keeps the Score has cracked the top 20 in this category for 45 weeks consecutively. It’s even made it to #9 on Amazon’s list of most read nonfiction, which it’s been on for 16 weeks. For a challenging book about trauma, that’s pretty impressive.

In addition, a fascinating Twitter thread started by Emily VanDerWerff documented the lengthy wait times for The Body Keeps the Score at libraries around North America. From Pittsburgh to Boston to Calgary to Nashville to Anchorage to Seattle, wait times were several weeks to months. At my local library, Toronto Public Library, I’d be waiting about nine weeks for an ebook copy (98 copies in use, 411 people waiting in total). A physical book would be even longer (620 holds for 88 copies).

Why is it so popular?

So libraries, bookstores, and online retailers across North America are seeing an increased interest. But the lingering question is: Why? Why is a nonfiction book from 2014 suddenly so popular?

Well, for one, it might not have been so sudden. Josh Christie, co-owner of Print: A Bookstore, said of their sales of The Body Keeps the Score, “We haven’t seen a huge change in the last 18 months, but we may be an outlier in that we’ve always had really strong sales of The Body Keeps the Score. Sales started picking up for us in early 2017, and it’s been a staple among our nonfiction since then. I’d say we sell a copy a week, if not more.”

Although they are only one store and potentially an outlier then, their sales do match up pretty well with the Google Trends figures over the past few years. Based on Google searches for the book, interest was on the low end from 2016 to 2018, started to build mid-2018, and continued to increase steadily from there. There were a couple jumps in particular around early 2019, late 2019, and mid-2020.

However, another bookstore I reached out to, Parnassus Books, offered an interesting contrast. “Over half of our store’s lifetime sales for The Body Keeps the Score have been from 2020 to present, which is unusual for a paperback that was published in 2014,” said Lindsay Lynch, adult book buyer for Parnassus Books. Either way, sales are high.

I asked Josh Christie about his take on why he thought The Body Keeps the Score might be so popular. He said, “I think that, like Braiding Sweetgrass (another backlist title that has exploded in popularity for us over the last few years), The Body Keeps the Score speaks to an increased interest in how deeply the people and environment around us affect us, and how we carry that in our bodies. I think it also shines a light on the slowly but steadily increasing cultural acceptance of therapy as important for everyone, and on people trying to better understand how they carry trauma within themselves.”

Parnassus Books has seen a similar parallel increase in Braiding Sweetgrass alongside The Body Keeps the Score, but they also add The Artist’s Way to that list. “[My] feeling is that our customers are seeking self-help books that zoom out and operate on a larger, more universal scale,” Lynch said.

But for theories around The Body Keeps the Score’s popularity in particular, Lynch said, “I think a lot of people are reevaluating their definitions of trauma right now — people who might have believed themselves to be trauma-free before the pandemic are beginning to pay closer attention to their pain and what it means.”

I think both of these perspectives hold truth. My personal hypothesis going into this piece had been that the popularity must have increased because of the pandemic. Sure, it did already have a decent baseline popularity, like is seen in Print’s sales or Google searches. After all, The Body Keeps the Score had been lower on the Times bestsellers list since November 2018, over a year before the pandemic. But then it shot up another level.

The books that have burst to the top of the bestsellers have often tapped into larger cultural conversations of the moment. Of course, there are also some perennial favourites, like whatever the latest big history book is. Sapiens filled this role in recent years, topping the list for many weeks in 2018 and 2019. Nonfiction tied to a film release is also a common winner, recently seen with I Heard You Paint Houses or Just Mercy, which both had stints at #1 around each movie’s release in 2019.

But looking back, you can map current events in the world pretty well onto the bestsellers list. In 2019, The Mueller Report and On Tyranny peaked alongside investigations into the Trump administration. As COVID-19 spread in early 2020, The Great Influenza spent a few weeks at the #1 spot. Then, when George Floyd was murdered and the Black Lives Matter movement gained increased attention, So You Want to Talk About Race and White Fragility dominated the list for much of the rest of 2020. It only shifted when Ruth Bader Ginsburg died in September 2020 and her book My Own Words took the lead for some weeks in late 2020. Near the Biden-Harris election, The Truths We Hold then had a couple quick stints at #1. At the beginning of this year, after the Capitol insurrection and presidential inauguration, On Tyranny was back at #1. The Body Keeps the Score had a couple brief appearances at #1 in May 2020 and January 2021, but the week of February 14, it returned to #1 and hasn’t left yet.

The Body Keeps the Score and the COVID-19 Pandemic

The Body Keeps the Score is, in my opinion, another book that taps into larger current events and conversations. It speaks to the increased recognition of trauma, both the pandemic as a collective trauma and the heightened awareness for other forms of trauma, like sexual trauma and racial trauma as the #MeToo and Black Lives Matter movements have respectively highlighted. (If you would like to read more books about trauma and recovery, try these books like The Body Keeps the Score.)

I first read The Body Keeps the Score in 2016, a couple months before I was officially diagnosed with post-traumatic stress disorder (PTSD). At my diagnosis, that was the first book my doctor recommended to me, and I get why. Alongside Trauma and Recovery, those books — seminal in their field — shaped my understanding of the effects that trauma has had and continues to have on my life. They also made space for something different: life after trauma.

For me, there’s a marked difference between 2016, the year of diagnosis and first read, and now. Back then, I felt relatively alone with my recognition of trauma. I remember complaining to others how I felt like I was secretly living in two worlds, one where I was working and going to school and acting like everything was fine and I was not traumatized, and another where I looked my childhood trauma square in the face and saw the damage it did and worked really, really hard to heal. Those two worlds hardly ever crossed over, or so it felt. In some ways, I felt burdened by how unseen my trauma was, but it also made sense to me. Acknowledging trauma is painful. It means facing the worst things humans can do to one another and threatens our view of the world and sense of safety in it, if we were lucky enough to have those things in the first place (or maybe we thought we did). That was why I avoided acknowledging my own trauma for so long.

Yet now it seems harder and harder to collectively ignore, as seen by news story after news story naming trauma in the wake of COVID-19. Friends, colleagues, and acquaintances are talking about trauma in a way I hadn’t seen pre-pandemic. While I think this shift was building with the increased acceptance of therapy and the rise of social movements like #MeToo and Black Lives Matter, the pandemic has forced many people to recognize the trauma that shapes so many of our lives. Even if our own lives or those of our loved ones haven’t been directly endangered or lost during the pandemic, it’s threatened life as we knew it and our sense of safety in the world (again, if we had those in the first place). In light of that, the surge in popularity of The Body Keeps the Score speaks to that painful recognition as well as the search for a path to healing.