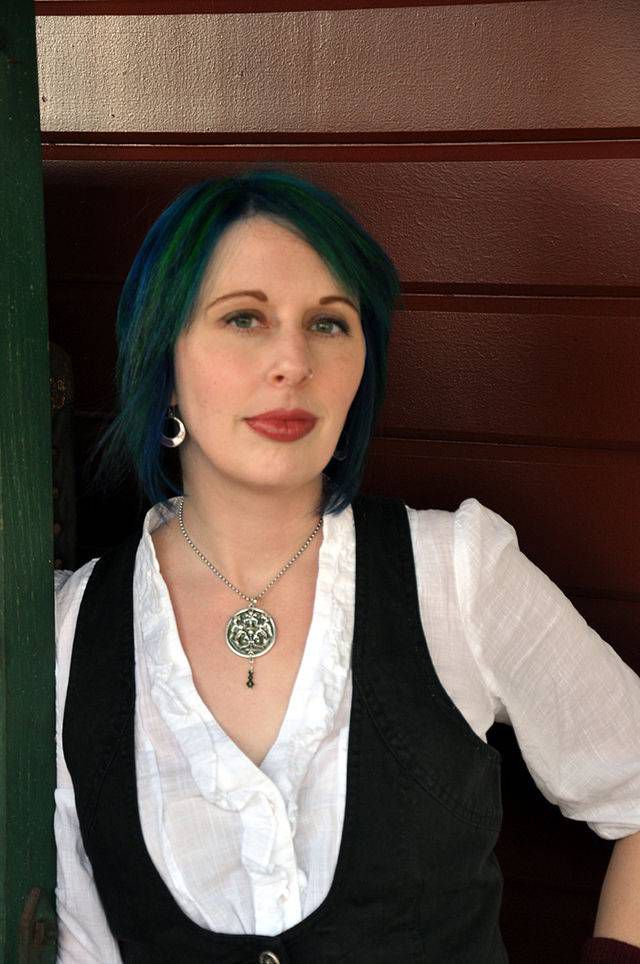 The campers of Miss Quinzella Thiskwin Penniquiqul Thistle Crumpet’s Camp for Hardcore Lady Types have gotten together to talk about their most favorite hardcore lady types in comics. There was a lot of happy shouting and arm flailing and comics pages flying through the air. Jen wrote down as much as she could before Ripley started using her notes to make a paper crown for her dinosaur.

By Women, About Women, For Women

When I’m not reading comics, I’m reading romance novels. One of the many things that I love about Romance is (for the most part) the books are by women, about women and for women. These fantastic comics are just that.

Pretty Deadly by Kelly Sue DeConnick, Emma Rios, and Jordie Bellaire
I’m still in awe of how beautiful this comic is. Like an intricate piece of clockwork, everything works together seamlessly to create this sprawling tale of Death, storytelling, and lady folk. You can almost smell the dust caked on your leather cowboy boots while you’re reading this comics. Pretty Deadly is firmly planted in the Old West. But the creators threw “historical accuracy” out the window and gave us a Western about complicated and diverse women in control of their own destinies. And damn anyone who gets in their way.

Lumberjanes by Noelle Stevenson, Grace Ellis, Brooke Allen and Maarta Laiho
Lumberjanes is like The Goonies but better. Both are about Friendship and Teamwork in the face of dangerous monsters/pirates and mysterious puzzles. And while adore every single on of the Goonies (except maybe for Andy), the cast of Lumberjanes is such a rich and diverse group of ladies. Each of the girls has a unique personality with her own strengths and weaknesses. And the book is all about them combining strengths and trusting and respecting others. When you have ladies working together behind the scenes, it only makes sense to see ladies working together on the page. FRIENDSHIP TO THE MAX.

Because comics are for kids too. And half of those kids are girls.

Hilda and the Black Hound by Luke Pearson
Luke Pearson’s Hildafolk series is one of those comics I’m evangelical about. Pearson’s style is a beautiful mix of indie and European comics, full of those quiet little moments that resonate so much. And to that a curious girl in constant search for adventure and those are the Hilda books. Hilda and the Black Hound, the fourth book in the series, sees Hilda, still trying to fit in after moving to the city, join a scouting club. But instead of focusing on finishing up her merit badges, she’s looking to solve the latest local mystery. Full of house spirits, giant dogs, magical worm holes and the misadventures of being a kid trying to fit in, this comic is a wonderful and whimsical read for all ages.

Cleopatra in Space #1: Target Practice by Mike Maihack
I found the webcomic Cleopatra in Space (which should always be read “in SPAAAAAAAAACE”) by a happy internet accident. It has all the bombastic action and sci-fi adventures of Flash Gordon, with the snappy, quick wit of Gilmore Girls. It is simply impossible to read this book without smiling. In this first volume in a series of graphic novels we get to see more than the laser gun shoot-outs we’re used to from the webcomic. Cleo, begrudgingly, has to balance her outer space missions with high school and homework, making a shining sci-fi adventure relatable and grounded.

“What Comic Should I Give My Girlfriend to Get Her into Comics?”

I dream of a world where I will never hear this question again. Because you know your significant other and their interests a hell of a lot better than I do. And if you don’t, you need to fix that. But if you’re looking for comics with female leads that are easily accessible for new comics readers, these were the best from this year.

This One Summer by Jillian Tamaki and Mariko Tamaki
This One Summer is a quietly beautiful exploration of that nebulous period between childhood adolescence and young adulthood. The kid stuff has lost it’s shine but the grown-up stuff is still a bit too far off to process. It’s about coming of age and friendship and the tense relationships between daughters and mothers, between girls and women. This is not a boy’s story; it’s not for men. This One Summer is about women and those awkward first steps toward womanhood.

Seconds by Bryan Lee O’Malley
A modern day fable about the dangers of getting what you wish for, Seconds follows the misadventures of chef and restauranteur Katie and her magical quest to fix all her past mistakes. Unsurprisingly, chaos ensues. But for as many steps back Katie takes, her friendship with coworker Hazel is one of the few things moving forward and growing in the book. It’s also some of the best work from Bryan Lee O’Malley and a beautifully produced graphic novel.

Kelly Sue DeConnick
“Bitches get stuff done” may have come from the razor-sharp pens of Tina Fey and Amy Poehler, but Kelly Sue DeConnick helped make it a way of life. Rallying around the #BGSD hashtag, DeConnick has brought a community of women together on the internet to help them be productive. She’ll even send you motivational text to keep you on task. DeConnick is not only a strong, feminist voice in comics, it feel like she’s made it her mission to support and foster relationships between women. Fuck frenemies, it’s about helping your sisters out. And awesome comics.

Kate Leth
If you haven’t heard of Kate Leth, you will. I hate to use the phrase “up and coming talent” because this woman is already talented,. Currently, Leth is writing the Bravest Warriors, Fraggle Rock, and Edward Scissorhands comics in addition to the two Adventure Time graphic novels that were released this year. She’s also the founder of The Valkyries, a bad-ass group of ladies who work in comic shops around the world. She’s also also the designer behind the Lumberjanes badges. And her Kate or Die webcomic (now also featured on Comics Alliance) is full of brilliant feminist and LGBTQ commentary.

The absolute BEST thing this year related to women and comics.

Kamala Khan, Ms. Marvel
I believe Kamala Khan is the Wonder Woman for a new generation. I think she’ll have a long legacy, and history will look back at her creation as a milestone in diversity and representation in comics and media. I hope my grandkids will be reading, watching, and dressing up as Ms.Marvel. Kamala Khan is Important within and outside the comics medium.

In addition to all that, Ms. Marvel is also one of the best comics to come out in 2014. Period. For a comic that had some hefty expectations, it doesn’t feel cumbersome. The brilliance of Ms. Marvel is in it’s simplicity. Kamala has so many universally relatable traits: she’s awkward and a bit self conscious, she’s enthusiastic and nerdy, she loves her family even though they drive her a bit batty, she’s trying her best to do the right thing and keep the teens of Jersey City safe from a crazy bird-man (like you do), and she’s full of so much heart. As a character, Kamala hits so many of the chords that Peter Parker did/does, and I think she resonates with a more modern audience the same way Peter did when he was introduced all those years ago. That’s why I think Kamala Khan will be with us for a very long time.

There was no way this list was going to be exhaustive. But there was some really brilliant comics that deserve a shout-out.

She-Hulk by Charles Soule, Javier Pulido, and Ron Wemberly showed us that Jennifer Walters and companies are just as much brains as brawn. This too-short-lived series has been a joy to read and introduced a new group of readers to the sensational She-Hulk.

We all fell in love with the quiet Olive Silverlock and the nerdy Maps Mizoguchi in Gotham Academy by Brenden Fletcher, Becky Cloonan, and Karl Kerschl.

The utter lack of judgement and shame (and abundance of hijinks and smarts) in Sex Criminals by Matt Fraction and Chip Zdarsky.

The lady-heavy pantheon of The Wicked + The Divine by Kieron Gillen, Jamie McKelvie, and Matt Wilson gave us an abundance complicated and brilliant and rich women characters to follow into hell.

Compliance be damned! Bitch Planet by Kelly Sue DeConnick and Valentine De Landro makes us want to punch the patriarchy in the fucking face.

2015 will be the year for Rat Queens by Kurtis Weibe and Stjepan Sejic.