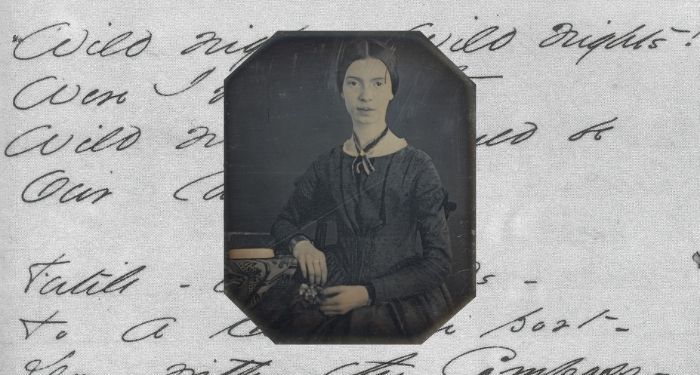 Emily Dickinson wrote almost 1,800 poems in her lifetime. Only ten of them were published while she was alive, and they were published anonymously at that. Posthumously, Dickinson has become one of the most recognized and celebrated English language poets in the world. There’s a few reasons for that, and in this humble Rioter’s opinion, some of it has to do with her poetic form and subject matter, and some of it has to do with the woman herself.

Dickinson was a solitary individual who lived her entire life in her parents’ home in Amherst, Massachusetts. She didn’t have the desire to leave, nor did she need to; the family was moderately wealthy, and she didn’t need to publish for money. A variety of reports corroborate that she was never interested in the attention publishing would bring. Writing poetry was a personal, private endeavor, which is only reinforced by how her poems were discovered after she passed away at the age of 55. Her sister Lavinia found them among Emily’s things, and there were no instructions on what to do with them. Lavinia resolved to have them published (which is a whole story on its own), and Emily’s attributed work began circulating in the 1890s.

Part of her success may come from her unusual approach to verse: she was quite simply ahead of her time, playing with structure, punctuation, and form in a way that would not become more widely popular until the Modernist movement from the early 1900s to the 1940s. Her lines are lyrical, charmingly offbeat, almost sing-song even at their most brooding. Dickinson tackled universal themes that were deeply personal to her, including isolation, identity, death, love, and family. Perhaps we’re most drawn to her poetry because Dickinson poured so much of herself into her body of work, and because the body of work had no intended audience but her own eyes. She didn’t write for anyone but herself, and there’s a brutal honesty and self awareness present that is hard to replicate.

December 10 is Emily Dickinson’s birthday, and I thought I’d try my hand at ranking the best of Emily’s vast collection of poems. How do I determine “the best”?

Dickinson had a knack for pairing striking visuals with the musicality of her poetic structure, and time has helped pluck out the “best” based on which lines and themes have resonated with the most people and risen to the top. As an English major, I can readily name five or six of the poems below that I’ve studied multiple times as both a high school student and a college student. Yes, she wrote a huge amount of poetry. But there’s a reason why we gravitate to a select few. They provide answers, they comfort, they lighten the heart, and most importantly, they make us feel less alone and more understood.

Here are the top 15 poems by Emily Dickinson, ranked by how ubiquitous the entire poems are, or even just a few lines that often get repeated in popular culture.

Dear March—Come in—
How glad I am—
I hoped for you before—
Put down your Hat—
You must have walked—
How out of Breath you are—
Dear March, how are you, and the Rest—
Did you leave Nature well—
Oh March, Come right upstairs with me—
I have so much to tell—

I got your Letter, and the Birds—
The Maples never knew that you were coming—
I declare – how Red their Faces grew—
But March, forgive me—
And all those Hills you left for me to Hue—
There was no Purple suitable—
You took it all with you—

Who knocks? That April—
Lock the Door—
I will not be pursued—
He stayed away a Year to call
When I am occupied—
But trifles look so trivial
As soon as you have come

14. My Life Closed Twice Before Its Close

So huge, so hopeless to conceive
As these that twice befell.
Parting is all we know of heaven,
And all we need of hell.

13. To Fight Aloud is Very Brave

To fight aloud, is very brave—
But gallanter, I know
Who charge within the bosom
The Cavalry of Woe—

Who win, and nations do not see—
Who fall — and none observe—
Whose dying eyes, no Country
Regards with patriot love—

We trust, in plumed procession
For such, the Angels go—
Rank after Rank, with even feet—
And Uniforms of snow.

A Bird, came down the Walk—
He did not know I saw—
He bit an Angle Worm in halves
And ate the fellow, raw,

And then, he drank a Dew
From a convenient Grass—
And then hopped sidewise to the Wall
To let a Beetle pass—

He glanced with rapid eyes,
That hurried all abroad—
They looked like frightened Beads, I thought,
He stirred his Velvet Head.

Like one in danger, Cautious,
I offered him a Crumb,
And he unrolled his feathers,
And rowed him softer Home—

Than Oars divide the Ocean,
Too silver for a seam,
Or Butterflies, off Banks of Noon,
Leap, plashless as they swim.

Success is counted sweetest
By those who ne’er succeed.
To comprehend a nectar
Requires sorest need.

As he defeated — dying —
On whose forbidden ear
The distant strains of triumph
Burst agonized and clear!

10. If I Can Stop One Heart From Breaking

9. I Dwell in Possibility

7. Tell All the Truth, But Tell it Slant

Tell all the truth, but tell it slant—
Success in Circuit lies
Too bright for our infirm Delight
The Truth’s superb surprise
As Lightning to the Children eased
With explanation kind
The Truth must dazzle gradually
Or every man be blind—

And do I smile, such cordial light
Opon the Valley glow—
It is as a Vesuvian face
Had let its pleasure through—

Though I than He — may longer live
He longer must — than I—
For I have but the power to kill,
Without — the power to die—

How dreary — to be — Somebody!
How public — like a Frog—
To tell one’s name — the livelong June—
To an admiring Bog!

3. Because I Could Not Stop for Death

Because I could not stop for Death—
He kindly stopped for me—
The Carriage held but just Ourselves—
And Immortality.

We slowly drove — He knew no haste
And I had put away
My labor and my leisure too,
For His Civility—

Or rather — He passed Us—
The Dews drew quivering and Chill—
For only Gossamer, my Gown—
My Tippet — only Tulle—

I felt a Funeral, in my Brain,
And Mourners to and fro
Kept treading — treading — till it seemed
That Sense was breaking through—

And when they all were seated,
A Service, like a Drum—
Kept beating — beating — till I thought
My Mind was going numb—

And then I heard them lift a Box
And creak across my Soul
With those same Boots of Lead, again,
Then Space — began to toll,

As all the Heavens were a Bell,
And Being, but an Ear,
And I, and Silence, some strange Race
Wrecked, solitary, here—

And then a Plank in Reason, broke,
And I dropped down, and down—
And hit a World, at every plunge,
And Finished knowing — then—

1. Hope is the Thing With Feathers

I’ve heard it in the chillest land—
And on the strangest Sea—
Yet — never — in Extremity,
It asked a crumb — of me.

The order of this list may not reflect the order of other lists, but there’s great overlap in which of her poems make it to the top. Dickinson’s work stays with us for its power, its playfulness, and its hope. Thank you for your words, Emily.

If you’d like to learn more about her, check out these posts: