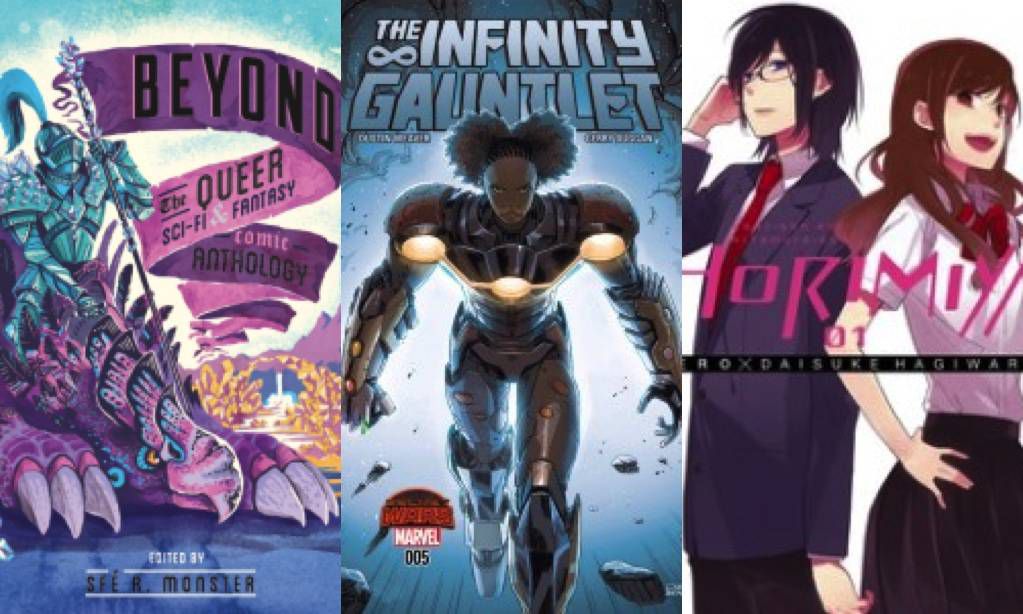 I’ve been enjoying the heck out of Steve Orlando’s Midnighter, which is what got me to check out this Shazam one-shot despite neither reading the Darkseid War storyline nor the Justice League series in general. Honestly, you can totally jump into this issue and get caught up with the plot going on fast. I love how Orlando handled Billy and how our young hero’s stubborn teenage ways and focus on doing the right thing get him through this treacherous journey through his own mind (while meeting the new gods that are going to make up his new powers). Kolins’ lineart pairs nicely with not only Billy’s characterization but also the new gods we meet and Fajaro’s colors pull it all together. It’s just a darn good read.

Science fiction and fantasy should tear apart boundaries, but too often its authors tread safely within modern social expectations. Beyond is brave, authentic SF/F in its inception and execution, as so many of its stories boast refreshingly new characters and concepts. Though I loved almost every story in its binding, my favorites were “A Royal Affair” by Christianne Goudreau and Taneka Slotts, “Optimal” by Blue Delliquanti, and “Duty and Honor” by Shing Yin Khor.

His marriage to the Scarlet Witch having failed, his twins sons having been revealed to be magical constructs, the Vision is having another go at domesticity. This time, to remove a certain margin of error, he’s built his bride and bairns. Wife Virginia and teens Viv and Vin are made in his own image, so living together should be a breeze, right? Tom King’s script is like a great episode of The Twilight Zone in the way it builds from suburban bliss to sheer nightmare, revealing the dark side of the American Dream. And the art by Gabriel Hernandez Walta is wonderfully well suited to the subject matter – just the sight of Vision in preppie wear is weird, and that’s before everything really kicks off. Bellaire’s Fall tones enhance the illustrations, telling us more about the characters and setting the mood. Of all the All-New, All-Different Marvel Comics, Vision #1 is the first to really surprise me, with its superbly crafted superhero creepiness.

The Children’s Crusade, Vertigo’s first and only line-wide crossover, was considered uncollectable for over two decades. While the opening and closing bookend chapters were written primarily by Neil Gaiman, the middle chapters took place over the 1993 Vertigo annuals and as a result were largely disjointed, with several having next to nothing to do with the crossover at all. At long last, Vertigo has finally come up with a perfect solution for collecting the story: they commissioned Toby Litt (writer of the recent Dead Boy Detectives series) and Peter Gross (of Lucifer and The Unwritten fame) to create a new middle chapter that synthesized and expanded upon the important material from the annuals. The result is a dramatic improvement over the original. Now made a relatively cohesive whole, it is possible to see why the Vertigo creators and editorial thought a crossover was a good idea in the first place. It’s simultaneously a flashback to early-90s Vertigo and an unexpected continuation of Litt’s Dead Boy Detectives run.

The Goddamned is a great combination of Conan-esque fantasy and an extension of the Biblical story of Cain. It follows Cain after he awakens in a cesspool outside of a town. He’d been attacked and left for dead, only Cain doesn’t die. He stalks back to the town and fights the entire horde to get back his few personal belongings. He then dons his clothes and takes off yet again, to wander the world looking for a death that won’t come. Only, he crosses path with Noah, who we are informed is a pirate. The star of this issue is r.m. Guéra’s art which delivers some fantastic visuals for the antediluvian wasteland. Giulia Brusco’s colors also lend to the eerie, not-quite-otherworldliness of the landscape while also painting everything in a sort of lurid view. In many ways the Barbarian Cain reminds me of the Heliand and Darren Arronowsky’s Noah.

Issue 15 of Kelly Sue DeConnick’s Captain Marvel dropped into Marvel Unlimited this month, I read it sitting in the back of a cab. So, issue 15 drops, I download it and I start reading. Carol has finally made it back to Earth, and she’s thrilled to finally be able to see the people she loves. But not everyone is there. Not everyone could wait. Carol just misses Tracey finally succumbing to cancer. This issue shows us two stories of loss. First Tracey losing her partner Teddy, and then Carol losing Tracey. I guess I should mention that my mother is a cancer survivor. I’m having trouble putting into words how hard DeConnick’s writing hit my heart, but it cut deep. It’s a 22 page comic. I think I started crying on page 14. That is 12 pages of story. That is 63 panels. That is 91 speech bubbles and text boxes. That is strong writing and strong artwork. Carol’s face at the point of realization, and her movement into a huddled crouch and hiding her face over the next 4 panels is so real and so familiar, it broke my heart. I wasn’t surprised when I read that Kelly Sue had a personal connection to loss. This read like a personal story. And I am glad that she shared it with us.

Why can’t this run of Infinity Gauntlet go on forever, I ask you?? If you haven’t been reading this storyline of Secret Wars, I cannot recommend it highly enough and you should go get all five issues immediately. It’s everything I want out of a comic: a plucky, unexpected heroine; real family connections (and struggles); a hugely action-packed plot with real personal stakes; a dynamic supporting cast; gorgeous art; and an ending that gave me All the Feels.

November has been a bit of slow comics month for me as I’ve been spending a bit more time catching reading some novels. I’ve been longing to return to the Dark Tower series. It’s been quite some time since I last read it, but I can’t fathom finding the time to do a re-read of that epic books series. This book is giving me the perfect dose of everyone’s favorite ka-tet. Highly recommended for those of you who wish to return to the beam, but only have the time for bite-sized portions.

I picked this up from Smith and Fox at Planet Comicon earlier this year, but it had sat patiently on my bookshelf since. Sitting in a hospital waiting room as my best bud and his wife had their first child, I dug into the backlog and Long Walk to Valhalla stood out. My own brother is mentally challenged, and though we didn’t grow up in nearly so broken a home as in this book, I related profoundly with the responsibility of a special-needs sibling. There is a relationship that comes about in that situation that others don’t quite understand, but Smith and Fox captured it well. Long Walk to Valhalla is a beautiful, poignant book that still manages to capture a bit of whimsy along the way.

This manga was recommended to me after expressing interest in Monthly Girls’ Nozaki Kun and it’s the best decision I’ve made all month. It’s about two classmates who find out about their lives outside of school and develop a friendship over this shared secret. It’s possibly the sweetest story I’ve read and the cover (both front/back) is gorgeous in highlighter pink. I highly recommend it.

The mystery that drove the previous Thor series is over — Jane Foster is the new Thor, and she’s right there on the cover. If you felt like the previous series was a bit of a stunt—built around one big reveal—then I implore you to check out this new series. The mystery has been replaced by a dramatic conflict with the potential to drive the series forward in fascinating new ways. Jane Foster is dying, but she keeps stopping her chemotherapy because she needs to be Thor, even though being Thor is what’s keeping her from getting better. On top of that, Thor is no longer welcome in Asgard, so Jane MUST return to her mortal form to accomplish good as Earth’s representative on the Council of Worlds. It’s this tightrope walk that makes for a classic Marvel setup. Being Thor is AMAZING; being human is necessary. But: moving back and forth between the two is killing you. What do you do? I’ve got to keep reading.

I was a bit indifferent to the original Moon Boy and Devil Dinosaur whenever I would encounter them in comics–the two always struck me as a bit too goofy, even for the funnybooks. However, this new iteration, featuring super-smart and super cute young genius Lunella, has completely stolen my heart. Lunella is a young genius who doesn’t really fit into her world. She’s ostracized at school, picked on by teachers, and her parents don’t really get her. Lunella as the focal voice for the book is a great choice by Montclare and Reeder: we might not all be science-loving geniuses, but we’ve all felt askance from the world at one time or another. The “Worlds Collide” introduction of the original Moon Boy and Devil Dinosaur is done well enough to not induce an eye-roll, and the art and colors really pop. This was a fun first issue and the ending hooked me into staying with this series. Buy this book for your kids–and for yourself. It’s a great read.

I know. I KNOW. What the heck took so long? I have absolutely no idea, but now I’m playing catch-up like whoa. Natasha’s decision at the end of Avengers Assemble: Science Bros was definitely intriguing, but I sort of forgot about it, caught in the crazy that was Captain Marvel and Hawkeye. When the first issue was finally on Marvel Unlimited, I sat down to read it, but wasn’t in the mood at the time. Since then, there’s been a lot more BW and I finally sat my behind down to read the first trade. The story was great, and the art was gorgeous. Bring on the rest.

This is not the first time that Giant Days has appeared on a Panels best-of list, and there’s a great reason for that: it’s just so, so good. When any adult asks me “I love Lumberjanes and Ms Marvel—what should I read next?” I always point them to Giant Days. Tremain’s art is amazing (and Cogar’s colors are outstanding), and this story of three young college roommates finding themselves and establishing friendships that will last a lifetime is touching, poignant, and hilarious.