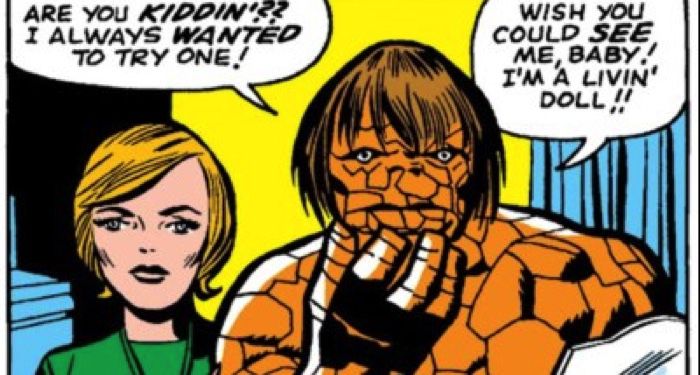 October 5th marks the 60th anniversary of the release of the Beatles’ official debut single, “Love Me Do” (in the UK, at least). In honor of this noteworthy date in pop culture, I decided to take a look at some of my favorite Beatles references in another bastion of pop culture that was huge in the ’60s: superhero comics.

Now, this is by no means a comprehensive list of Beatles cameos in comics. For starters, I’ve limited my scope to Marvel and DC — and specifically to their superhero comics, meaning no Stan Lee Presents: The Beatles Story (it’s a real thing), no MAD Magazine appearances, etc. I’m also not interested in the many uses of the Beatles in background shots and collages meant to evoke “Hey! It’s the ’60s!” as a means of setting a scene.

No, we’re looking at ’60s and ’70s Beatles interactions with superheroes specifically, mostly because nothing says “How do you do, fellow kids?” like a bunch of middle aged men trying to capture a moptopped zeitgeist in the pages of Jimmy Olsen of whatever.

The franchise that seems to have encountered the Fab Four the most frequently is, fittingly enough, the Fantastic Four. The earliest reference comes in Fantastic Four #34 (January 1965), when the Thing receives a gag gift from his recurring frenemies, the Yancy Street Gang: a Beatles wig. Though initially irritated, Ben eventually dons the wig, confessing that he’s always wanted to try one. This panel is worth the 12¢ cost of the issue alone:

Just two months later, in Strange Tales #130 (March 1965), the FF actually met the Beatles, in a story called — what else? — “Meet the Beatles!” Well, almost. Alicia Masters and Dorrie Evans, the respective girlfriends of the Thing and the Human Torch, just happen to spot the Beatles wandering around New York City, and are inspired to buy four tickets to that evening’s concert, which is miraculously not sold out. Now, I’ve seen A Hard Day’s Night, which I’m assuming we can take as strict historical fact, and I am highly skeptical that the Beatles would just be meandering around a major city without being mobbed. But maybe teens are more blasé in the Marvel universe?

Anyway, Johnny, A Youth, is pleased about the tickets, while Ben grumbles (though he does bring along his Beatles wig). Tragically, just as they arrive at the venue, some hoodlums rob the box office, and the Human Torch and the Thing must spring into action. After defeating the thieves, they return to the venue to discover that they’ve missed the entire concert. What a revoltin’ development!

Other Fantastic Four Beatles references came later and were much more passing in nature: they visit an alternate universe where John Lennon is still alive in Fantastic Four #47 (1998 series); both foursomes meet properly in Fantastic Four: Life Story, a retelling of the FF’s history. But probably the best known and definitely the most charming is in 1994’s Marvels, when artist Alex Ross snuck the Beatles into the crowd at Reed and Sue’s wedding. Can you spot them all?

Over on the DC side of things, the first characters to actually meet the Beatles that I know of are the Metal Men, of all people/robots, in Metal Men #12 (March 1965), where we learn that the two groups are mutual fans:

You’d think the DC characters most likely to hang out with the Beatles would be the Teen Titans, but as I’ve said before, early Titans comics weren’t exactly plugged into youth culture — even though the Beatles appeared to be fans of the Titans, at least according to Teen Titans #11. Boy, the DCU’s Beatles are kind of a bunch of fanboys, aren’t they?

If you needed proof that DC was less hip than Marvel in the ’60s, note that something as mild as “being liked by the Beatles” has to be balanced out by “also being liked by President Johnson,” lest we think the Titans are juvenile delinquents or something. Also, this issue is from 1967. The Beatles did not look like that in 1967.

DC finally emerged from the ’50s in around 1970, and so they’re a little more with it in Batman #222 (June 1970), when Batman and Robin get caught up in the “Paul is dead” conspiracy theory. I mean, “Saul is dead.” Yes, that’s right, “Saul Cartwright,” a member of the Twists, the most thinly veiled celebrity cameos in the history of comics. Whatever, I’m counting it!

In this delightfully silly story, Dick Grayson’s college buddies convince him, a literal detective, that Paul Saul has died and been secretly replaced by a look-alike, by playing supposed hidden messages on Twist records. Luckily, Dick is the ward of Bruce Wayne, and Bruce Wayne is a major stockholder in the Twists’ record label, a power he’s apparently all too willing to abuse. “As Batman — I don’t want to be party to a hoax,” Bruce thinks, thereby justifying the nonsense he’s about to get up to, before inviting the Twists to Gotham for a concert.

Inexplicably, the band agrees to stay at Wayne Manor, but Saul is moody and cagey, making Bruce and Dick even more suspicious. They make various and increasingly stupid attempts to record Saul’s singing voice so that they can compare it to a pre-death track — at one point, they pretend it’s Alfred’s birthday to get the Twists to sing “Happy Birthday” to him and only realize when they listen to the track that Saul wasn’t singing solo. Are you the world’s greatest detectives or aren’t you???

Our embarrassingly incompetent heroes are convinced that they’re on the right track when they’re violently attacked under the cover of darkness. That is, until Saul reveals the truth:

That’s right: it was the other three members of the band who died and were replaced with look-alikes! This is actually a pretty clever solution, since I suspect DC didn’t want to either call its teenage readers gullible dupes or boldly proclaim that the real Paul McCartney was totally dead. Batman and Robin, apparently forgetting that Lohn Jennon over there tried to kill them, suggest that they come clean and form a new band. I’m choosing to believe that the name of this fake band, Phoenix, inspired the real Paul’s formation of Wings a year later.

(Fun fact! This comic hit stands 11 days after Paul announced his departure from the band. Awkward.)

But even this delicious zaniness pales in comparison to what is probably DC’s most infamous Beatles comic, which doesn’t even have the Beatles in it: Superman’s Pal Jimmy Olsen #79 (September 1964).

This truly sublime story begins with Jimmy dancing alone to the Beatles while wearing a custom-made ginger Beatles wig, like a cool and hip person all teenagers would admire. Suddenly, he’s visited by Kasmir, a criminal from the 30th century, who tricks Jimmy into piloting a stolen time machine 3,000 years into the past. Luckily, Jimmy speaks the local language! For some reason!

Jimmy is rescued from this futuristic desperado by a mysterious, super-strong teen known only as Mighty Youth (yes, really). Inexplicably, Jimmy’s first order of business is not to figure out how to send a message to his time traveling bestie Superman, but to get a job. Capitalism is a poison, kids.

He ends up shearing sheep for a local shepherd, but disappointed by how little it pays, comes up with a side hustle: dying surplus wool black, turning it into Beatles wigs, and selling said wigs to teens of ancient Judea:

He’s playing “I Want to Hold Your Hand” on a ram’s horn. I don’t know why everyone says Superman movies are hard to make when they’ve never even tried to adapt this issue.

Unfortunately for Jimmy, Kasmir is still hanging around, and jealous of Jimmy’s success. He rats him out to the shepherd, who claims the wool for Jimmy’s wigs was stolen from him (which…yeah, it was), and has Jimmy thrown in jail. Jimmy blows on the ram’s horn for help, and Mighty Youth shows up to save him…oh, and Mighty Youth is actually the biblical Samson, because of course he is.

Kasmir attempts to revenge himself upon Team Jimmy by cutting Samson’s hair, but luckily Jimmy saw him coming and plopped his own ginger Beatles wig onto Samson’s head just in time, meaning Kasmir only cut the wig. The Beatles save the day again!

Superman shows up completely at random at this point and handily defeats everyone who still needs defeating, but he and Jimmy stay in ancient Judea for one last farewell concert:

“You seem to be as popular as Ringo, the Beatle drummer!” Who says Superman’s not hip and with it? I should also note that this epic biblical, Beatlelical story is only nine pages long, with two other Jimmy tales in the comic. Say what you will about mid-’60s DC and how cringingly embarrassing their attempts at relevance could be, but you got your money’s worth.

If you’re looking for a comic that’s actually about the Beatles, there’s no better place to start than The Fifth Beatle: The Brian Epstein Story by Vivek J. Tiwary, Andrew C. Robinson, and Kyle Baker. Meanwhile, I’ll leave you with my favorite (relatively) modern appearance of the Beatles in a superhero comic, from Tiny Titans #8 (November 2008):