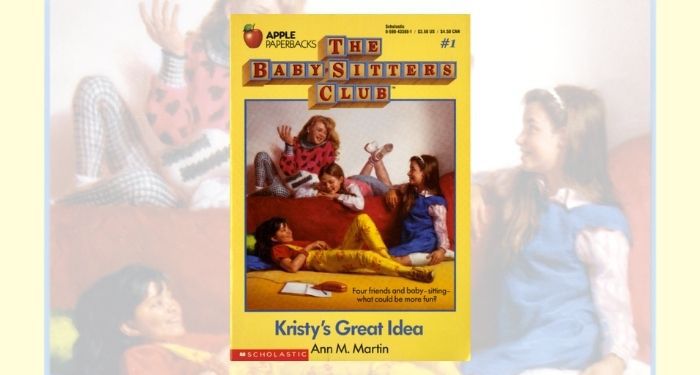 A score-odd years ago, you forbade me from reading Baby-Sitters Club books.

Well…mostly. What you technically said was, I wasn’t allowed to own Baby-Sitters Club books. Or to check them out from the library.

So I did read them, but only two of them: Hello, Mallory, which I borrowed from a friend; and Little Miss Stoneybrook…and Dawn, which I read sitting on the floor at the library since I wasn’t allowed to bring it home. I wasn’t much of a rule-breaker back then. In fact, even now, I’m a little scared to tell you this:

Look, I could pretend like each Baby-Sitters Club book has been a breather between chapters of Moby Dick or Ulysses. But it turns out I’m no better at lying to you now than I was as a child. The reality is that these books have been my return to fiction after the long, sleepless hours of 2020’s lockdown. If anything, I’ve been turning to fanfic and advice columns as breathers between Kristy’s brainstorms and Stacey’s secrets and Mary Anne’s stands for justice and Claudia’s ongoing struggle to convince everyone — especially herself — that her neuroatypicality and her creative genius go hand-in-hand.

I could also pretend the Baby-Sitters Club is a guilty pleasure. I could say, hah, well, I’ve read them now, and you were right! What trash! What drivel! The Baby-Sitters Club has melted my brain! No wonder you kept me from these perverse Mattel collector’s items posing as literature!

But we’ve established that I can’t lie to you. So I gotta say it: I think the Baby-Sitters Club books are good.

I think you should have let me read them, maybe even encouraged me to read them, all those years ago.

Between the Baby-Sitters Club books, the tattoos, and the whiskey, I suppose it may be hard to imagine there’s much left in me of the docile child you raised. But fear not, Mom, because I’m still enough of a goody-goody regularly to brag to people that I come from a right honorable line of the best Girl Scout leaders the world has ever known: first Grammy, and then you.

(Admittedly, that boast seems to strike people as less sycophantic these days than it did when I was a teenager. It’s probably in the phrasing, which is now usually something like: “What? All your troop did was sell cookies? Someone hold my beer while I tell you what my mom did to this one bear in Yosemite!”)

So one of the reasons I love the Baby-Sitters Club series is because of the sheer number of times it makes me think, “Awww, these girls solve problems the way Mom taught us to in Girl Scouts!”

You need money? You run a business. You need customers? You go door-to-door — yes, even if cookie-selling season starts on Super Bowl Sunday and everyone is real peeved about answering the doorbell. Customers forgot about you? Whoops, they never had a chance to, because you called them on the phone to follow up! You and your teammates, who are also your best friends, disagree about how to conduct your business? You vote. Then you talk it out and forgive each other.

And then — this is my favorite part — your day goes on.

There’s more to come after your Girl Scout troop meeting, or Baby-Sitters Club meeting, or theater rehearsal, or basketball practice. Whatever the focus of the story, it’s only a fraction of your story. That’s why, in the Baby-Sitters Club books, we see Jessi rushing in from ballet class and Mallory cracking open books about horses. We see Mary Anne at dinner with her single dad and Claudia having tea her grandmother, Mimi. We see Kristy being an incredible babysitter to what seems like every kid in Stoneybrook, but we also see her battle jealousy when she meets her own young stepsiblings.

This kind of girlhood — the kind where you get to be a leader and a friend and a whole, independent person — is hard to come by in either fiction or reality. I already knew that was why you led our Girl Scout troop the way you did: to create a space where my peers and I could experience that kind of wholeness. Now that I’ve read Ann M. Martin’s books, I know she created the Baby-Sitters Club for the same reason.

You know, Mom, I don’t know for sure why you had such an aversion to the Baby-Sitters Club books. But I get the sense part of the issue may have been that you thought they were poorly written? That would explain even much more recently, when I half-jokingly revived the debate via Facebook, you deftly responded, “The Baby-Sitters Club books were not worthy of you, my dear.”

Two English degrees and a budding career in literary education later, I’m still not sure how to argue about the quality of writing on a prose level. Or even if one can. Or even what “prose” means. Or even what “mean” means. Thank my literary theory classes for that one!

But I do feel confident saying that as stories, the Baby-Sitters Club books are superbly written. In fact, I wish they’d been covered in my college Creative Writing classes. Don’t get me wrong: I’m really glad I’ve read Shirley Jackson and Tillie Olsen and all the authors I’d never have known about if I hadn’t been well-versed in a few key volumes of The Best American Short Stories! (Big shout-outs to Eleanor Henderson and Aimee Bender here.)

And yet, I’m not sure I’ve ever seen the basics of great storytelling displayed in such high relief as in the Baby-Sitters Club books. I’ve already mentioned how fully realized the girls who make up the club are. As a result, when each book introduces a new problem, it matters deeply which girl’s problem it is.

It’s easy to roll your eyes at the way every book reminds us that Kristy is bossy, Mary Anne is sensitive, Stacey is sophisticated, and Claudia is an Artist with a capital A. But the real impact of Ann M. Martin’s decision to define each of her main characters so clearly and then cast each one in turn as the narrator is that we always care not just about what happens, but also about who’s telling us about it and why they’re relaying it that way. The roles we’re told each girl fills are simplistic, but the stories they tell are vastly more complex.

In that sense, the Baby-Sitters Club is weirdly a lot like Chaucer’s Canterbury Tales?? Just like the Miller and the Wife of Bath, the main characters of the Baby-Sitters Club are set up as archetypes — but that’s because we’re meant to consider how that influences the way they tell their stories. And no shade to Chaucer here, but unlike most of his characters, these girls demonstrate character change as a result of the challenges they work their way through.

To make matters even more interesting, the main cast of the Baby-Sitters Club aren’t the only characters who are fully developed and deeply emotionally explored. So are their families, their friends, and maybe most impressively of all, the kids they care for. Martin shows that precocious 8-year-old Charlotte Johanssen has trouble fitting in with her peers just as conscientiously as she lets us know that Stacey’s diagnosis with diabetes is making her feel insecure.

In every book, each character’s conflicts are evident, but not every character’s conflicts are loud. When Stacey’s narrating, for example, we might get pages about how much it frustrates her when her parents fret about her health problems and only a few sentences about Charlotte’s school troubles. Which makes sense, because when you’re a narrator — especially a 13-year-old narrator — it’s hard to see what other people around you are enduring!

But in the end, our narrator always gets it. And we always get to see our supporting characters as well as our main characters resolve their biggest problems.

…Which probably makes it clear that part of why I love this series is that I always know everything will be okay in the end. I’m not about to deny that there’s a predictable rhythm to the Baby-Sitters Club: a clear pattern that doesn’t keep bad things from happening, exactly, but that reassures you that even if someone moves away, or gets divorced, or dies, you’ll be okay. And you probably already know who will rally around you to make sure you’re okay.

But maybe that repetition isn’t such a bad thing. Maybe the repetition, in Chapter Two of each book, of the whole club’s backstory and each character’s basic personality, isn’t a bad thing either. That very repetition is a huge part of what makes these books so comforting. And this year, I really needed that.

So on the one hand: yes, Mom, I think you should have let me read the Baby-Sitters Club books from the beginning. But on the other, I’m not sure I’ve ever needed the comfort they provide quite as badly as I did in 2021. Ultimately, then, thank you for not letting me read these books when I was a child. Because if you had, I don’t know where I’d have found this kind of comfort when I needed it most as an adult.