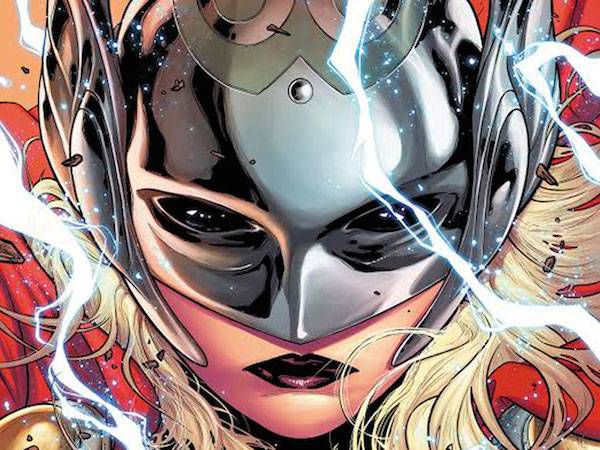 You’ve got a handful of pages to prove your concept, to introduce your character, to get your hooks into your reader and keep ’em coming back for more. How do you handle it? In The Art of the Start, we look at first issues, be they new originals, fresh story angles, or total reboots. You only get one chance to make a first impression.

Two new series debuted this week, each from one of the major super-hero publishers. Marvel’s Thor #1 brings a fresh spin and a fresh face to the Norse hero, while DC’s Gotham Academy maps out a new corner of The Dark Knight’s haunted metropolis. Their mission, however, was the same: to pique your interest and to get you back for another chapter. So, how did they do?

Thor #1 arrives with a lot of media attention. Because, you know, Thor is suddenly not Chris Hemsworth. But whatever the buzz, whatever the marketing, at the end of the day a first issue still has to deliver a compelling story.

If you’ve been following Thor’s previous series, this #1 is essentially the next issue. Writer Jason Aaron returns, this time abetted by Russell Dauterman, who brings a a clean line that reminds me a bit of Emma Rios and Frank Quitely in places.

After a literal “cold open” as Frost Giants lay siege to an undersea Roxxon laboratory, we move into major storyline of the book, and for a first issue, this is the bit that might throw newcomers a little bit. I think the storytelling is fairly clear, but there’s no getting around the fact that the whole premise has some backstory. In this case, the backstory arises out of the end of Marvel’s Original Sin event, which left Thor’s hammer stuck on the moon, with our hero unable to lift it.

However, once you get past the fact that there’s some dead dude called the Watcher, and then Nick Fury whispered something to Thor that caused all of this, we’re able to get into the consequences of this mystery plight. None of the Asgardians, even Odin, can lift the hammer. And Odin is the one who enchanted the hammer in the first place, isn’t he? Our Thor, bereft of the power of his hammer, mopes about, ragged and unshaven, until he decides to get back into the action with a goat and an axe.

This is what works best about this story as a first issue. Thor begins in a low place, but picks himself up to return to battle. However, he’s unprepared for the return of the dark elf Malekith… and we are left with a pretty hefty cliffhanger.

And what about the female Thor on the cover of this issue #1? Well… she’s not the focus here, so readers coming in to read about this new hero really get nothing more than a tease, as the first issue ends with a mysterious woman picking up Mjolnir.

While that aspect might be nothing more than a tease, it definitely makes for a compelling first issue, as we are already emotionally invested in the Odinson’s plight at the bottom of the ocean, while being asked to “hang on until next issue” for a little more insight into the female Thor.

Written by Becky Cloonan and Brenden K. Fletcher and illustrated by Karl Kerschl, Gotham Academy #1, brings some fresh faces and a new locale to Batman’s city. This is an intriguing book right from the start, as even from the first page, we’re introduced to students and a school that evoke Harry Potter more than Batman. This actually works well as a starting point, as we learn about the school and the mysteries via a character named “Maps” Mizoguchi who tours the school with her peer, a mysterious silver-haired Olive Silverlock (y’know, I juuuust got the name, even as I typed that out).

By design, this is a cleaner opening than Thor. Maps is an RPG gamer who wants to sketch out the campus, an artistic opportunity put to good use by Kerschl with some interesting layouts that introduce the school and the characters in some fun new ways.

Over the course of this issue, we learn that Olive has changed. She has an ex-boyfriend (Maps older brother), she acts differently toward the other students, and… perhaps most importantly, she’s terrified of the Batman, who despite one hallucination on Olive’s part, does not appear in the story (in costume) at all, though his Bat Signal looms in the skyline, a constant reminder of the city that surrounds them.

By the end of the first issue, we’re left with a lot of questions about Olive, some vague connections to Bruce Wayne and Batman, and some mysterious eyes peering through the cracks in the walls. Cloonan, Fletcher and Kerschl establish a whole, impressive world in this issue, and while I wasn’t as emotionally invested in Olive or Maps as I was in Thor’s tale, I’m impressed with the setup, and the fact that the single issue works as a proof-of-concept for a new corner of our favorite little grim metropolis.