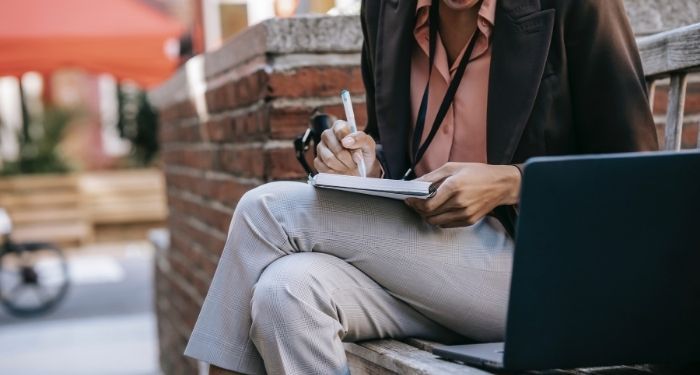 There’s just something about the concept of ghostwriting — much like the word implies — that immediately captures the imagination. The first time I met a book ghostwriter, I was instantly intrigued. At that time, I was a full-time creative advertising writer, so I was familiar with what it takes to try to write in other peoples’ voices, but the longest advertising copy I’d ever written was a single page. What must it be like, I wondered, to be so aligned with another person’s mind and spirit that you can write an entire book in that person’s voice?

I know I’m not the only book lover out there who’s had this thought. So to get some answers on the art of ghostwriting — what the process entails, how it plays into the literary world, and what it’s like to work as a book ghostwriter — I talked to two experts of the craft. Angie Ransome-Jones (Path to Peace: A Guide to Managing Life After Losing a Loved One) is a national best-selling author and ghostwriter; delmetria millener is a freelance writer, ghostwriter, teacher, and #TeenWritersProject Founder.

The Art of Ghostwriting: What It Is

The technical definition of ghostwriting is just what it seems: writing for another person who is named as the author. On her website, millener describes it this way for potential clients: “I create or reshape your thoughts into words that tell your story while preserving your voice and your style.”

But ghostwriting is so much more than an author sitting down to write as she’d ordinarily do. Along with basic writing and storytelling skills, the craft of ghostwriting requires the ability to understand and connect with people, to have an ear for voice, and possess a love for and willingness to help others shine.

The Art of Ghostwriting: How it Works

So, what happens once a ghostwriter and client decide to collaborate on a book? It’s a combination of story building, managing logistics, and developing a personal connection.

Both millener and Ransome-Jones begin every ghostwriting project by spending one-on-one time with their clients. “It’s a very intensive process which requires hours, sometimes weeks of interview time,” Ransome-Jones explained. During this time, Ransome-Jones’s goal is not only to start getting to know her client, but also to “unpack [the] full story.” After she feels she understands the crux of her client’s story, she prepares an outline, which then becomes the “roadmap for our interviews to guide our discussions, as well as the book content itself.”

Once she actually begins putting words on a page, Ransome-Jones regularly shares the manuscript in progress to make sure she’s “capturing the essence of the story that my client wants to tell.”

“As your ghost,” millener assures her clients on her website, “I do all the interviewing, reading and research required.” Both authors also work around deadlines and word count as they complete the work. Ransome-Jones told me that because about 60% of her clients are self-published, over the years she’s built “an arsenal of resources in the form of cover design artists, typesetters, printers, editors, PR reps” and more for her clients.

In talking with millener and Ransome-Jones, it became very clear to me that the heart of ghostwriting lies in the client-writer relationship. When it comes to telling the right story in an authentic voice, millener told me, “first, you establish trust.” Doing so requires both quantity of and quality of time, not just in the initial stages of the collaboration, but throughout the process.

millener typically begins forming relationships with her clients over the phone. Then, over a span of time, she tries to meet with them in person in a variety of casual, formal, and personal environments. Ransome-Jones told me she, too, spends a lot of time on the phone with clients, “sometimes at six o’clock in the morning, depending on schedules.” In fact, phone conversations — at least two or three times per week — make up the bulk of her time with her out-of-state clients, although she has traveled to meet clients in their hometowns or “in places where their major traumas have occurred.”

Both writers are devoted to making the most of the time they spend with their clients. millener makes it a point to “listen with minimal to no talking” so she can get a genuine sense of who they really are. In order to avoid coming off “like a journalist,” she tries to eat with them, laugh with them, and let her questions “flow freely and seemingly unintentionally.”

Ransome-Jones also likes to stay in the moment with her clients and told me that it can get “very intense, depending on the storyline.”

The Art of Ghostwriting: Why it Matters

“Not everyone can write, but everyone has a story to tell,” millener told me. Both writers told me they believe many authors seek out ghostwriters because, as Ransome-Jones explained it, “they are not comfortable with their own writing ability or because they don’t have the time, energy or discipline that it takes to write a book.” Without ghostwriters who, as millener put it, “know how to take what [others] say and mold it into literary art,” so many of the incredible stories that entertain, resonate with, and move and inspire us, might not ever be published.

The Art of Ghostwriting: What It’s Like to Do It

How do authors become book ghostwriters, too? In millener’s case, she told me, “Ghostwriting chose me. I was working as a copywriter and had to write advertorials for CEOs, which led to speeches, which pushed me right on through the door to ghostwriting a book.” For Ransome-Jones, it happened when the brother of one of her sorority sisters needed help writing his book. When Ransome-Jones heard his story, she was so moved by it that she took a break from writing her own book so she could work on his.

Many ghostwriters, including millener, have never revealed which books they’ve ghostwritten. It’s common for ghostwriters to agree to complete anonymity by signing a nondisclosure contract—in fact, millener told me this kind of anonymity often provides opportunities for ghostwriters to charge higher rates. While Ransome-Jones has also signed nondisclosure agreements when working with some of her authors, many of her other clients have spoken of her publicly and have provided testimonials on her website.

In the end, both millener and Ransome-Jones told me the greatest rewards of ghostwriting come from seeing their clients succeed. millener told me that ghostwriting, in comparison to her own writing, is a “different kind of rewarding. It’s not about me. Let the author shine.” She genuinely cherishes the opportunity to remain anonymous, summing it up this way: “It feels like a delicious secret.”

Ransome-Jones told me, “I am in love with the craft of ghostwriting and helping clients realize their dreams.” Some of her self-published clients’ books have been picked up by literary agents and major publishers. One of her client’s books is being adapted into a screenplay while a couple of her other clients and their stories have been featured on TV shows, including Dr. Oz and 30 for 30.

Ransome-Jones described what it’s like the first time she sees a client holding a copy of the book: “It is truly a full-circle moment for me and very similar to giving birth in that as painful as the process can be, the reward at the end is always worth the sacrifice of time and effort.”

So, as supernatural as it might sound, the art of ghostwriting couldn’t be any more grounded in humanity. And yet, this intangible ability these ghostwriters possess — to become so invisible that they can authentically channel stories from the people who need to tell them — might just be one of the most magical gifts in the storytelling community.

Now that you’ve gotten a peek of what it’s like to be a ghostwriter, keep reading more behind-the-scenes stories about writers.