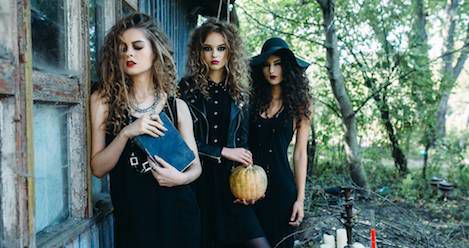 Witchcraft narratives have captured human imagination for centuries. This was not always good, I’ll grant you. No amount of fascination is strong enough to hold up against the threat of a sacrificial pyre. But the idea of the witch, the mystique surrounding her, proves irresistible every time. There’s an appeal to the witch that’s equal parts intellectual and whimsical, an appeal that goes far beyond an ingrained interest in magic. My fellow Rioters have been recommending witchy narratives for years, after all, and it’s always a sure bet that there are more to come. In the meantime, this is a breakdown of the appeal of the witch character.

The witch has real power

Patriarchal society means that women are preemptively at a disadvantage, our possibilities thwarted by birth. We are socialized to be quiet, to be accommodating, to not have too much ambition because what would the world think? When we speak up, we’re told we’re hysterical. When we’re quiet, they call us doormats. And the power, the hard power that in our western society comes with money and social status, remains firmly ensconced in the hands of privileged white men.

Witches are a reaction against that. They have genuine power at their disposal, simmering at their fingertips, and needn’t depend on men to get what they want. They don’t need to be nice or accommodating unless they, gasp, want to. The witch thumbs her nose at societal expectations of her, not in provocation or a conscious attempt to be independent, but because she genuinely has zero need for its approval.

They didn’t call her Wise Woman for nothing

The world is a mysterious, complicated place, and humanity is constantly on a quest for answers. For centuries, the figure of the witch was not only accepted but respected, sometimes even revered. She was said to possess healing powers, to be able to communicate to the dead, to foretell the future. She’s an interpreter of nature, and has the elements on her side. It’s no wonder that the word “witch” comes from the ancient Anglo-Saxon “wicca,” which in turn derives from wicce,” “wise.” The accumulation of knowledge in her mind makes it a little hard to consider her otherwise.

The witch, while possibly unremarkable in every other way, is an Other. She’s excluded, her own self rejected because some people can’t or won’t accept her own special traits the same way they would, say, somebody’s singing talent. In a world that too often rejects that which it does not understand, it is easy for people, particularly marginalized people, to relate to her. I said above that she doesn’t need societal approval. That doesn’t mean its disapproval wouldn’t hurt, especially if it comes from people she cares about.

Do people ever really outgrow the enchantment of magic? I haven’t. And judging from the steady outpour of magic stories (be they about witches, sorcerers or fairies) and their widespread success, neither have plenty of other people. Magic echoes delightfully to our childhood fairy tales, always there to scoop us up when reality is overwhelming and we’d like to believe, just for a moment, that happily ever after does exist and justice will always triumph, no matter the odds. The witch is an embodiment of that.