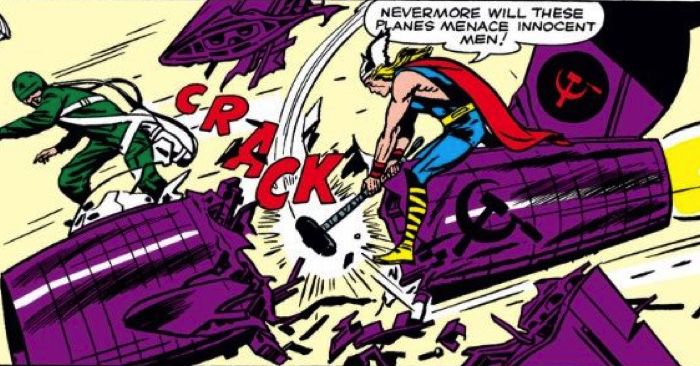 Marvel Comics has created iconic superheroes in just about every decade since their inception as Timely Comics in 1939. In the 1940s, we got Captain America; the 1970s gave us Wolverine; and in the 2010s, we were introduced to Miles Morales and Kamala Khan. Wondrous creations all, but there’s something distinctive about a 1960s Marvel superhero.

The 1960s were a ridiculously productive decade for Marvel, thanks in large part to the fertile imaginations of Steve Ditko, Jack Kirby, and Stan Lee. At least one of those three was involved in the creation of every hero spotlighted in this article. As a result, ’60s Marvel superheroes—while all entertaining in their own ways—share many similarities. So if you’re looking to find heroic success the Marvel way, here’s what you’ll need.

As Jess Plummer is fond of reminding us, superhero fashion is hard. A few heroes (hi, Spider-Man!) got lucky and hit on an enduring costume right off the bat. If you’re like most heroes, however, you had better resign yourself to looking a little silly for a while. But don’t despair! Just think of how cool you’ll look when you finally get your wardrobe together.

Sometimes, a ’60s Marvel hero goes through several iterations of his (and it’s always his) costume before settling on one. Iron Man started out in silver, then in gold, and then finally in that iconic red and gold (albeit with a funky helmet). Daredevil got all artsy-craftsy with his costume before switching to the thematically appropriate red one.

It can be difficult to tell when you have a winner on your hands. Doctor Strange ditched his perfectly fine outfit for what I can only describe as very bad Blue Man Group cosplay. Ant-Man exchanged his silly but distinctive helmet for several ill-advised looks when he became Giant-Man.

Your fashion designer girlfriend let you out of the house like that?

The Goofy Early Costume gives you a solid base to experiment with until you find the style that suits you best. Embrace it.

In his civilian life, a ’60s Marvel hero has a lady friend to whom he is very attached. This lady friend secretly returns the hero’s affections but is waiting for him to make the first move. All the while, she cannot help but wish that her crush was more like the local superhero, not realizing that he is the local superhero. If there’s one thing ’60s Marvel loves, it’s irony.

In many cases, the love interest is unattainable for another reason beyond the hero’s concern that she will become a supervillain target for dating him. The Hulk’s love interest, Betty Ross, is the daughter of the army general out to kill him. Iron Man kept away from Pepper Potts in part because he knew someone else was in love with her.

The quality of these love interests can be something of a crapshoot. Daredevil’s Karen Page and Thor’s Jane Foster were really heckin’ rude when it came to their love interest’s disabilities.

No woman deserves the name Karen more than this Karen.

And then there’s Professor Xavier’s secret crush, which fortunately never went farther than this thought balloon.

THAT’S NOT THE POINT, CHARLES.

The Fights With Spider-Man and Sub-Mariner

It’s tough being the new kid on the block. Why should people pay any attention to you when they’ve already got a whole host of mighty Marvel creations on whom to spend their dimes and pennies?

Hero vs. hero battles are a standard way of drumming up interest in a new character. Any hero will do, really, but if you’re going to be a successful ’60s Marvel hero, there’s two guys you’ve simply gotta fight: Namor the Sub-Mariner, an antihero created in 1939…

…and the amazing Spider-Man, one of Marvel’s most successful ’60s heroes (and that’s really saying something!).

Daredevil, the Avengers, the Fantastic Four, and the X-Men all fought these two early in their careers. Iron Man also fought Namor several times, but instead of Spidey, he took on Captain America. Their fight was orchestrated by a Spider-Man villain, though, so…close enough?

The Hulk is also a popular choice for hero vs. hero battles. In fact, a fight with the Hulk is what led to the formation of the Avengers!

No Marvel hero is complete without a heaping helping of agonizing angst. The source of his misery is often The Unattainable Love Interest. But it also owes a lot to the reason he became a hero in the first place. He may have been granted extraordinary powers, but the side effects are life-ruining. Like I said, ’60s Marvel looooves their irony.

Neither the Hulk nor the Thing (of Fantastic Four fame) were real thrilled about being turned into inhuman-looking creatures. The X-Men were feared and hated because they were mutants. And Iron Man was stuck in his chest plate 24/7 or else his heart would stop.

It kind of puts a damper on your social life when you have to plug yourself into a wall outlet every few hours.

If you’re gonna be a ’60s Marvel hero, you gotta hate communism. There’s no getting around that fact. Even Thor, who you’d think would have better things to do than to get involved in earthly politics, started whaling on those rascally Reds in his very first issue after his origin story.

But even that isn’t fast enough for some heroes. Some jumped on the anti-communist bandwagon in the origin stories themselves. Iron Man, who was kidnapped by communists and escaped by building his first suit, is probably the most famous. But the Hulk and Ant-Man owe their heroic careers to communist interference as well.

Meanwhile, the Fantastic Four fought the Red Ghost, a Soviet scientist who tried using super-powered apes to conquer the moon (it didn’t work), and Daredevil clashed with the Purple Man, a foreign agent who gained superpowers during a botched spy mission. In conclusion, if you haven’t beat up at least one commie in your career, you probably are one.

Similar to The Unattainable Love Interest, The Best Friend is someone the hero knows in his civilian life. Despite frequent superhero-related misunderstandings, they would go to the ends of the earth for each other. The Hulk’s bestie, Rick Jones, is an especially interesting case, as he’s one of the few (possibly the only) Best Friends who knew his pal’s secret identity right out of the gate. Most others took years, if not decades, to get a clue.

Not every ’60s Marvel hero has a best friend. If you’re on a team, for instance, you don’t have as much need for additional supporting characters. And Doctor Strange preferred the company of his manservant Wong to actual friends, which I think says a lot about him.

There you have it, all you merry Marvelites! The tried and tested, true blue, titanically triumphant formula for a successful ’60s Marvel hero! If there’s a better way to start a career, don’t tell these swingin’ superheroes—you’ll hurt their feelings! Till next time, true believers, may your armor never rust and your web-shooters never break!