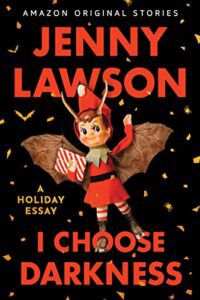 Jenny Lawson believes Halloween is the holiday that beats all others. From cheap costumes to creepy dolls to questionable candy, New York Times bestselling author Jenny Lawson gives us a hauntingly hilarious short story about her ongoing—and sometimes outrageous—Halloween life. Travel with Lawson back to where it all started, as a trick-or-treater in 1980s Texas. Discover how she rose to claim her rightful place as the queen of Halloween. Prime members read and listen to this short story, hilariously narrated by Jenny Lawson herself, for FREE.

at CBR: 10 Ways Attack On Titan Is Worse When You’re An Adult

at Goodreads: The 60 Most Popular Horror Books of the Past Five Years

at Kirkus: 8 Books You Can’t Put Down

at Buzzfeed: 15 Incredible Memoirs To Look Out For This Fall

at Epic Reads: 13 Books That Prove You Don’t Have to Choose Between Romance and Sci-Fi

at POPSUGAR: 143 of the Best YA Books Coming Out this Year

at The New York Times: 15 New Books Coming in October