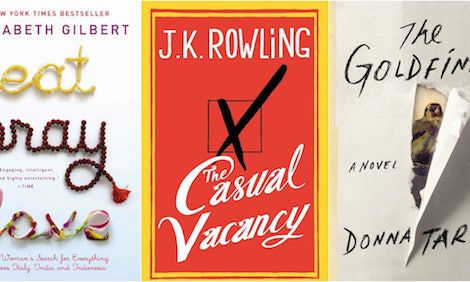 It’s happened to the best of us. You pick up a new book and at first, it’s great. This book just seems to get you. The two of you go everywhere together, and you can’t stop telling all your friends about this great new story you’ve been hanging out with. But after a few hundred pages, you start to wonder if you’ve been kidding yourself. Does this book really even understand you at all? What did you see in this book in the first place? You start looking longingly at the other books on your shelves. You might even start reading a new book, behind your book’s back (it’s not cheating if you skim), and finally, at long last, you have to just give up on your original book altogether, before you make it to the end. These are the most frequently abandoned books, according to Goodreads’ “Popular Abandoned Books” shelf.

Any surprises here? One of the things many have in common is that they’re really long books.

For an author publishing her first novel, every pre-order is a valuable prize. For Jane Austen, a 36-year-old writer who polished her prose in a country parlor by reading aloud to family, cracking 19th-century England’s book market came with some royal help. A new discovery—a 15-shilling bill of sale from 1811, for Austen’s Sense and Sensibility two days before it was publicly advertised, and made out to the prince regent (later George IV)—made via the Georgian Papers Programme sheds light on Austen’s popularity and the prince’s cultural power.

“As the first documented purchase of an Austen novel, it raises all sorts of delicious speculations, not to mention some entertaining irony,” says historian Sarah Glosson. “The prince, while reviled by many, would have been a tastemaker in his social circle, so the fact that he likely had one of the very first copies of Sense and Sensibility—perhaps in his hands before anyone else—is remarkable.”

This is totally fascinating!

Jefferson had a distinctive pattern of initialing the pages of his personal books, and sometimes inserted the first page of a text into the middle of the book while rebinding it. Both idiosyncrasies were present in Brown’s books.

Brown shared this information with Endrina Tay, a staffer at Jefferson’s presidential library. Brown wasn’t completely honest with Tay – he didn’t divulge the dumpster provenance of the books because he thought he wouldn’t be taken seriously. Instead, he said he had inherited the books from his family.

After an email correspondence, Tay concluded that two of the books Brown found were indeed Jefferson’s own, Tay said.

Also fascinating and also related to the power of…receipts!

📸: @bluestockingbookshelf for #RiotGrams — "Celebrating Harry Potter’s birthday with this gorgeous, zero calorie cake. 🙌🏻 . Which book is your favorite and why? Mine is The Prisoner of Azkaban because Rowling introduces SO MANY amazing new characters (Hello Lupin, Sirius, Buckbeak and Crookshanks!) to the story. And Harry going up against the dementors is so powerful. 😭 . Featured editions are on my blog! Go to: Collections | Children’s Classics | Bloomsbury 20th Anniversary Harry Potter Editions"