Emma Nichols is a bookseller; officially she specializes in children and their book fairs, unofficially she is passionate about short stories and spreadsheets. When not working, she can be found organizing her books, taking pictures of her cat, and talking to the bookternet. She is also one-half of the Drunk Booksellers podcast. Follow her on Twitter @thebibliot.

On the first Saturday of May—the first annual Independent Bookstore Day—I fulfilled a long time fantasy of spending way too much money on books all in one go (about $200, give or take a paperback). Originally, this fantasy involved walking into a single bookstore and for an hour or so allowing money to be no object because—oh look, there’s that collection of feminist fairy tale poetry I’ve been wanting to read and ooh they have the paper-over-board version of that book, oh oh and that new sci-fi novel the internet won’t shut up about.

Being a full-time bookseller (a gratifying, soul-elevating, but not exactly high-paying job) I figured this would always stay a fantasy. But on Indie Bookstore Day my friends and I visited seventeen different Seattle bookstores, and I bought a book at nearly every one. See, I can’t exit a new bookstore without buying a book, it’s against the code. Going to seventeen in one day was intense, so we functioned as a group and someone always walked out with something, but it was usually me. 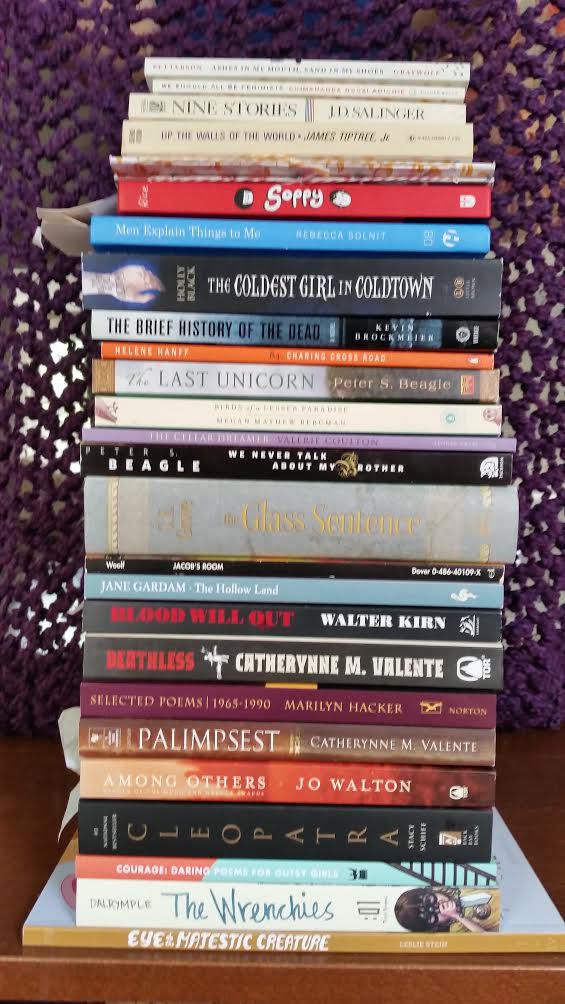 At Parkplace Books I bought Courage: Daring Poems for Gutsy Girls because I’d never heard of it and that subtitle (not to mention excellent cover art) was all the convincing I needed. At Third Place Books I bought Rebecca Solnit’s Men Explain Things to Me in paper-over-board because I’m obsessed with that format (also, awesome book). At Seattle Mystery Bookshop I bought The Coldest Girl in Coldtown by Holly Black because The Darkest Part of the Forest was amazing, and then a bookseller retroactively handsold it to me (which is what we call it when booksellers enthusiastically encourage you—we just can’t help it—to buy the book you’re already buying).

See, a bunch of stores in and around Seattle issued a challenge for Indie Bookstore Day: visit all seventeen participants on May 2nd and receive 25% off at every store for an entire year. I’d been planning my trip to Seattle—where my friend and former co-worker Kim now lives—for about a month. This basically involved marking every bookstore I could find in Seattle on a map. When she told me about #SEABookstoreDay I already had a map with about twenty five bookstores marked, was already insisting we visit at least half, if not more, while I was there. And here was an opportunity—no, an epic quest—to visit seventeen in a single day. We weren’t really in it for the prizes (living in Jersey City, Seattle bookstore discounts are not especially useful), but for the challenge.

We mapped and timed it out, giving ourselves—ideally—twenty minutes at each store, ample time for exploring and note-taking (I usually take notes when I’m in a bookstore—about their fixtures, displays, endcaps, faceouts, staff picks, etc… is that weird?). Kim, her partner Ren, my partner Sean, and I left the apartment at 7 a.m. with snacks, coffee, determination, and whatever each of us was currently reading. (Kim, on the ferry to our first stop: “Is anyone bringing their books? You don’t have to… I’m just asking… for a friend.”)

Inevitably, determined to win the challenge, we spent less time at each store than I would’ve liked. We live-tweeted the whole adventure, partially for fun and partially to publicize our new—and at the time unrecorded—podcast, Drunk Booksellers. And I’d like to blame our haste on not wanting to disappoint the people who were (surprisingly) following along on the internet. Most stops went like this: run in, one person approaches a bookseller for a handsell (which we included in our first episode) while the other takes pictures and finds a book to buy, praise the booksellers for their awesome [display, staff pick, fixtures], wave, run out. Repeat.

While some of the stores inevitably run together in my mind, I remember every single book purchased. At Mockingbird Books I bought their last copy of The Glass Sentence by S.E. Grove—after attempting to handsell it to the clerk there. At Open Books, a poetry-only bookstore—a POETRY ONLY BOOKSTORE, can we just appreciate that wonderful unicorn for a second?—I bought a collection of Marilyn Hacker poems (Selected Poems 1965-1990) that I’d been searching for since reading a sexy sestina in college. At Elliott Bay Book Co. I bought Palimpsest by Cat Valente—a book I’ve been craving since finding out her Fairyland series began as a fictional book in this fictional book. At Ravenna Third Place I bought three books (Deathless by Cat Valente, The Last Unicorn by Peter S. Beagle, and We Never Talk About My Brother also by Beagle) after striking up a conversation with a bookseller there whose tastes aligned with mine.

I could go on and on about the books I stumbled upon, the books I grabbed because we needed to buy something, and the books I was handsold on this wonderful bookish day in Seattle. I bought books I’d never heard of, books I’d been meaning to read, and books I may never read. I bought books I’d already read, but wanted to own, and books that were recommended to me months or years ago. Sure, one month later I have only half-started one of the books purchased in Seattle, and yes there is literally no more room on my bookshelves. True, I work in a bookstore where I could have bought the books eventually and cheaper. But now I have a physical, towering manifestation of my trip. And I finally got a chance to unrepentantly spend money on all the books.