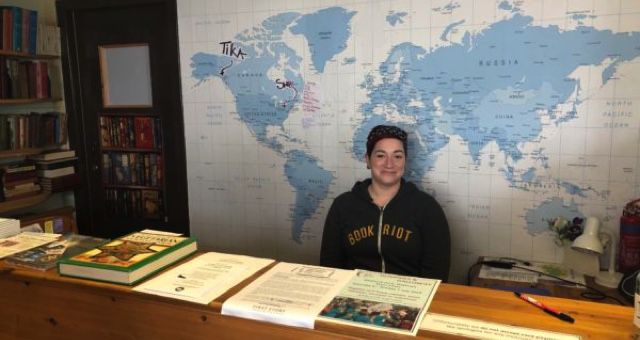 Population: Wikipedia says 1000. That’s…generous. The town is like, five streets. We accidentally walked to the next town one day. I’d put it at more like 400–500.

Number of Bookstores: 7 (not including antiques shops that also have book stock) 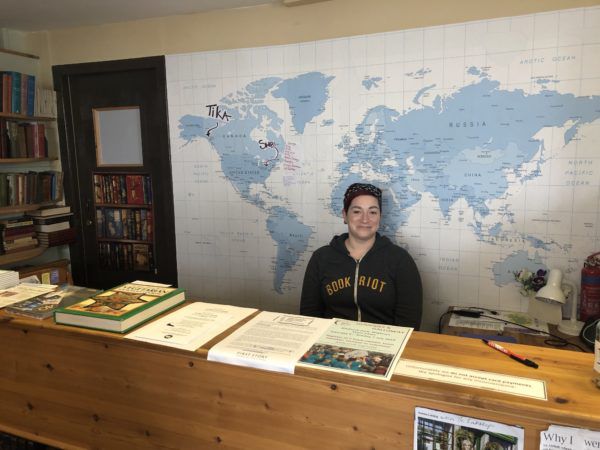 It all started down the pub.

Two residents of Wigtown, Scotland’s National Booktown and host of the yearly Scottish National Book Festival, hatched a plan to bring more tourism to the town year round by using The Open Book, one of the seven book shops and the flat above, as an Airbnb. The money earned, both by the ever-changing proprietors and from the rental fees, would be donated back to the Festival and folks from all over the world could experience the fun parts of running a bookshop without having to do the difficult bits.

There, was, apparently, much laughter and saying of nay.

“I’ve had to eat my words,” one of the naysayers told me when they came into the shop to say hello to my best friend and I on our first day running The Open Book. 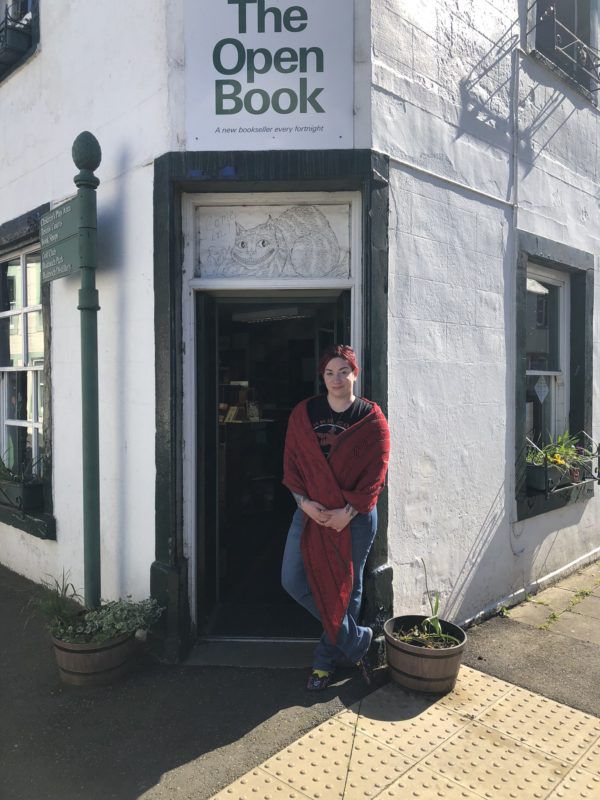 Indeed, Tika and I booked our stay in Wigtown back in 2016 after seeing an article on BuzzFeed touting the virtues of the experience. We immediately sent it to one another and each received it from several friends over the following few days, which seemed a sign we simply had to book it. And so we did, settling in to wait. And wait. And wait. I didn’t really believe it was happening until my plane landed for its layover at Heathrow.

A Pause for Note on Language

The folks who run the Airbnb are going to update future occupants on this, but word to those who have never travelled abroad: immigrations will ask you the purpose of the visit and they will check the address on your immigration card. I told the officer in London I was staying in a bookshop. They were fine with that. Also, I was going on to Scotland and they didn’t really care. If you say you are going to work in a bookshop, however, they will send you home unless you have a work visa which you won’t have for this trip because you don’t need it. You are not working. You are paying someone, not being payed. You are volunteering for the book festival, if the questions get that specific. Also, make certain you have the contact information for the folks at the Airbnb in case immigration wants speak to them. Once we arrived, we did hear a story about someone who was actually sent home. Verbiage is important.

Rather than trying to drive in Glasgow, Tika and I took the train about an hour to Ayr, a lovely town about halfway between the city and Wigtown, stayed over night, and rented our car there. We headed out the next morning, drove through the lowlands (translation: Tika drove because I am a coward), and arrived unscathed in Wigtown the next afternoon. We were greeted by George (the current property manager) and Margie (who will be taking over) who showed us the shop and the flat, clued us in on the basics, and then left us to our own devices.

By which I mean we went to the market across the street to get cured meat, cheese, and bread for dinner, ate, and fell asleep.

Tika and I were prepared for a host of guidelines and rules for running The Open Book. It is a business, after all, and one meant to make money for the festival, which feels Very Important when you read about it on the website. And it is, but it turns out, the whole town really just wants you to have a wonderful time. The basics are thus: most people open by 10 and the majority of stragglers by 12. The first few days, everyone feels very responsible and keeps the shop open until 4ish. You will notice, however, the very first time you open the green doors, that there are myriad notes taped to the inside of the righthand one. As you glance through them, you’ll find an epistolary history of things people have left the shop for an hour or an afternoon or a whole day to do: “Heatwave, back tomorrow.” “Gone to see a castle.” “Gone to make cheesecake, come taste at 2pm on Friday.” We added, “Gone for gin,” “Gone looking for a Blue Box,” and, “Gone looking at art.” Also, “Gone to pet lambs.” Also, the locals would come in around 2-3pm each day and ask us why we weren’t out on an adventure, immediately suggest one, and basically kick us out the door.

It’s very rude to argue with the locals. Especially when there are standing stones ten minutes away you can climb on, a fascinating martyr history to follow, and cheese after which to quest.

I don’t make the rules. 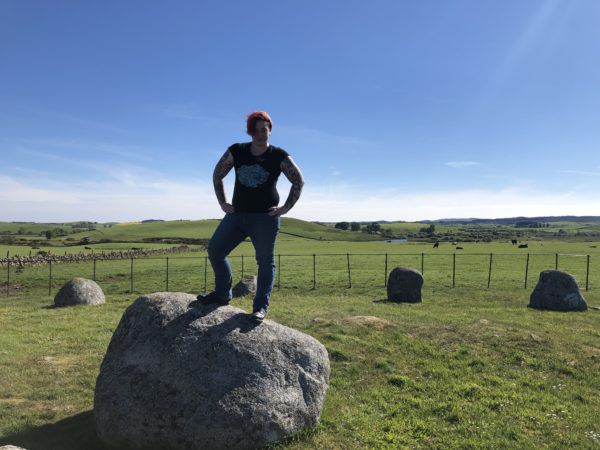 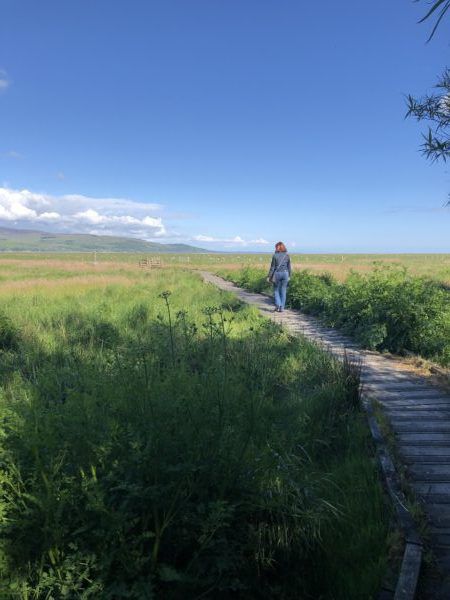 Lest you think we didn’t do our duties, we totally did. We had a ton of fun redoing the window displays: Tika did one on gardening and I did one on Scottish wildlife. We started a third on travel, but then found a whole slew of WTF books and swapped out for a “How did these get published?” window. The participant that seemed to cause the most consternation was not, as you might expect, the microwave fish cookbook, but rather our assertion that the book suggestion the British had invented sports was incorrect because the Persians were playing polo back in the 6th century BCE. 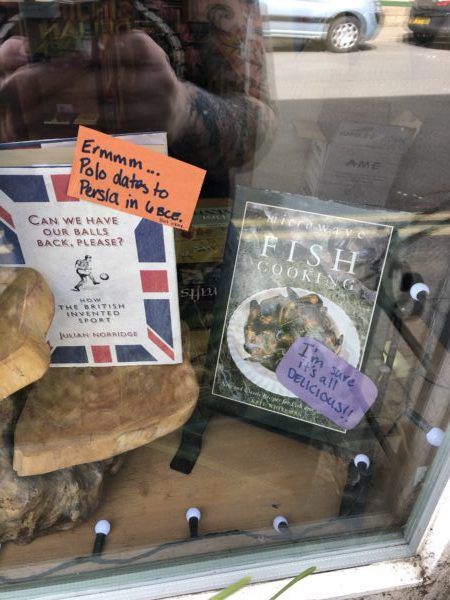 And then, there were our picks of the week, some of which greatly amused the ladies who came to visit over the course of our stay: 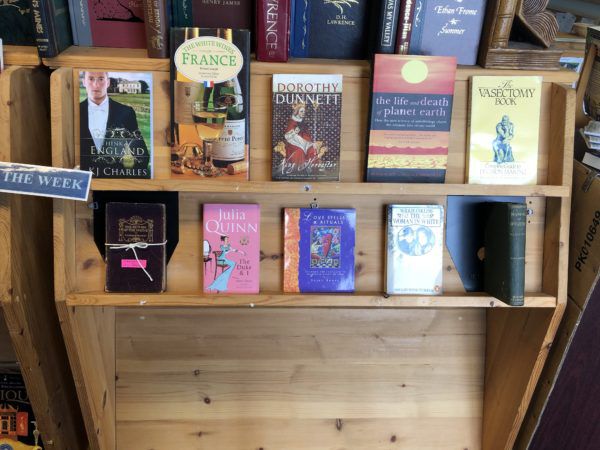 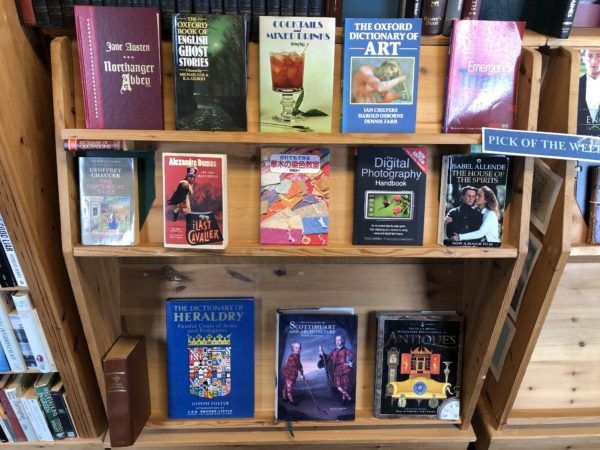 The Open Book doesn’t actually keep track of its stock, most of which is comprised of cast-offs from the other shops in town; the register is a cash box they leave the key in; the sales log as an actual ledger that records not only sales, but the days people brought in shortbread or tea or their dogs. No one is exactly sure what’s in inventory which makes every day looking through the shelves a ball of magical, hilarious, and sometimes incredulously horrified. People will occasionally come in asking for something specific; if it’s a category or subject there’s every chance you might hit the jackpot (one of our customers was on a search for books about standing stones and I found five or six; her companion, on the hunt for tomes concerning past life regression, struck out). If the customer is looking for a particular title, odds are slim and there is no database or even a log book—but searching the shelves and stacks and plastic tubs is oddly satisfying even if you don’t find what you’re looking for, and you may very well unearth some other treasure for the customer. Or something spectacularly weird. And no one was disappointed when we couldn’t come up with their title. 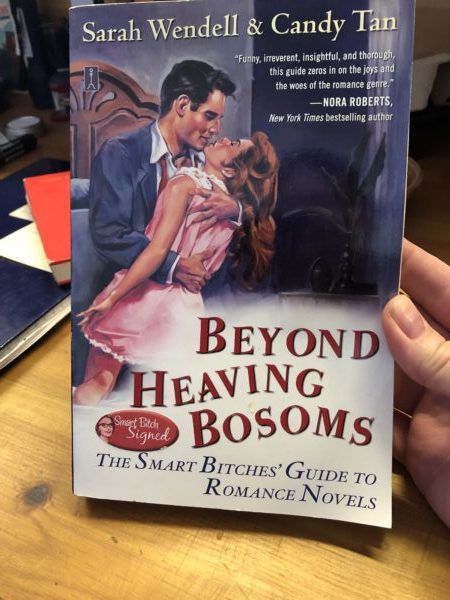 Other duties include vacuuming in the evening (or whenever you decide to close), knowing where the fuse box is (the cabinet in the kid’s section), hosting events at the shop (if you want), pricing books without said (there’s zero science to this, it’s totally up to you), and shelving new stock (or pitching it in the discard bin). We had a few customers who planned to revisit the shop later in the week and asked us to keep eyes out for any new books on particular subjects, which made going through the random piles of books that kept appearing from the shop next door way more fun (I like having a mission).

The locals visited the shop frequently to say hello and welcome and to chat with us, including The Bookshop Band member, Ben (each of their albums has, at its heart, a different literary genre). They gave us tips on walks to take and spots to visit. There were invitations to the pub I might have turned down on my own, being a natural introvert, but Tika insisted I accompany to her, and I’m so glad I did. I’m pretty sure I made some friends for life. We, of course, scoped the other bookshops, including Curly Tale Books, a fantastic kid-centric store; The Old Bank Bookshop run by the lovely Joyce and Ian; The Bookshop with its miles of shelves, wonderful decor, and entire section of second-hand Folio society volumes I only barely resisted, especially the Da Vinci notebooks; Number 11, the Festival bookshop where I definitely bought a pair of socks that say “Go Away, I’m Reading,” and which was also hosted some of the artists during Spring Fling and has local gin and scotch; and Byre Books which lives in what I’ve called an “elf tunnel” since I was a little kid. 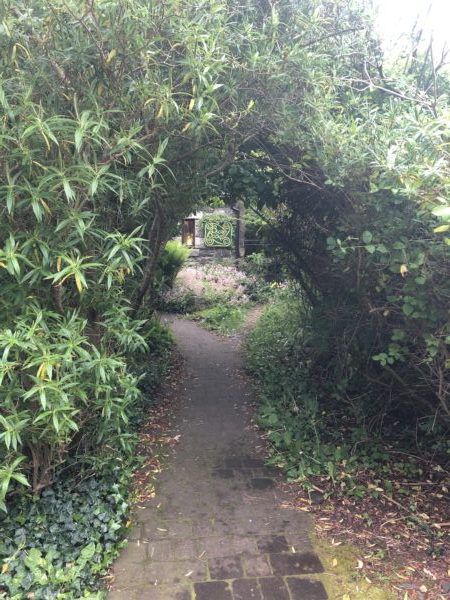 Any cons? Um…the WiFi is pretty unreliable, but our tour guide at the distillery told us the whole area only just got broadband last year (I mean, my friend from Ireland who has cows in his backyard commented we were in the hinterlands) and, to be honest, it was sort of nice to be less connected for the week. The flat doesn’t have a television and we didn’t try to stream, but I imagine it would be rough at best so if that’s your relaxation, maybe bring some extra audio books.

The food options in Wigtown are solid but limited and not super exotic. There’s a local co-op that has a decent selection considering it’s the size of a mini-mart and they have fresh bread and pastries every morning plus a very solid selection of Cadbury, yogurt, granola, fruit, veg, and cheese, so Tika and I were 100% fine. 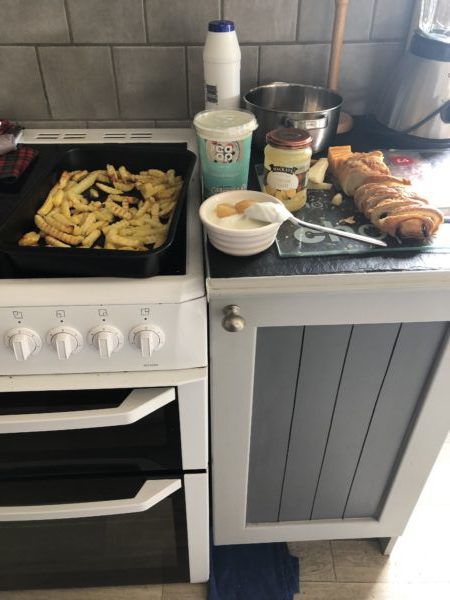 We were told Reading Lasses, the feminist bookshop and cafe, has the best coffee in town, but she was closed due to a family emergency while we were in so we hit Café Rendevouz for cappuccino most mornings, elevensies more than once, and lunch several days (leave room for dessert). Tika loved the steak and ale pie at Cobwebs, and The Craft is the local for most of the…well, locals with a comfy squashy couch area for chatting and both regional beer and cider.

If you’re on a more restrictive diet, however, there are both a Sainsbury (UK supermarket chain) and an Aldi 15–20 minutes away in the larger town of Newton Stewart. The fridge in the flat is one of the small, dorm-sized ones, so if you’re going to the larger markets, plan time in your schedule to make the drive every few days or for a menu that tends toward shelf stable.

I really can’t recommend this holiday highly enough. It’s not your typical run hither and thither tour of the UK, which I do enjoy and plan to go back to Glasgow and do exactly that. Your week in Wigtown will be something very different: it will be living in a place you’ve never lived before, spending a week as part of a community that will welcome you wholeheartedly purely on the basis of a shared love of books. Through that, you may discover other interests in common, but if you don’t, that’s okay, because books are enough. The moment you arrive, you’ll feel at home, and the second you leave, you’ll want to go back. Tika and I are already making plans to return for the Book Festival sometime in the next few years, but to be honest, I don’t need a reason. Books have always been in my blood and now Wigtown is too.