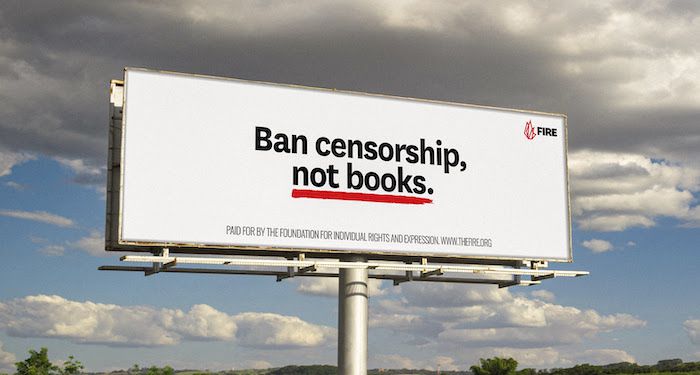 The Foundation for Individual Rights and Expression is a nonprofit dedicated to defending free speech. To draw attention to the censorship happening in Texas schools and libraries right now, they’ve put up two billboards. The first, which is up in Keller now, says “Free Speech Makes Free People.” The second will go up December 18th, and it reads, “Ban Censorship, Not Books.”

The Keller Independent School District board voted last month to ban any book that contains “discussion or depiction of gender fluidity.” “Gender fluidity,” like “Critical Race Theory,” is an existing term that conservative groups have co-opted and redefined as a fear-mongering tactic. While gender fluidity has been used for decades as a label for people who experience their gender as unfixed — changing anywhere between occasionally to daily — it’s been (incorrectly) defined by Keller ISD as:

“any theory or ideology that: (1) espouses the view that gender is merely a social construct; (2) espouses the view that it is possible for a person to be any gender or none (i.e., non-binary) based solely on that person’s feelings or preferences; or (3) supports hormone therapy or other medical treatments or procedures to temporarily or permanently alter a person’s body or genetic make-up so that it ‘matches’ a self-believed gender that is different from the person’s biological sex (as determined by the person’s birth certificate made at or near the time of the person’s birth).“

In short, it has banned any book that acknowledges the existence of transgender or nonbinary people from schools, including high schools. FIRE argues this could be used to also ban any media that shows gender nonconforming characters, and could even be applied to Disney’s Mulan.

“The bottom line is that Keller is prohibiting books based on the politics of the ideas they contain. You can’t ban books because they argue gender is a social construct any more than you can ban books arguing there are only two genders. Students in Keller will suffer from this ideological book ban, which sends a clear message that neither free speech nor different viewpoints are permitted.”

They are hoping that these billboards draw attention to this violation of the First Amendment. This policy isn’t in isolation, either: Texas has banned the most books of any state in 2022, and Keller ISD has been one of the biggest players in this surge of censorship.

You can read more about Keller ISD’s ban of “gender fluidity” in books at FIRE.

To find out how to fight book bans and censorship, check out our anti-censorship tool kit and sign up for our weekly Literary Activism newsletter.