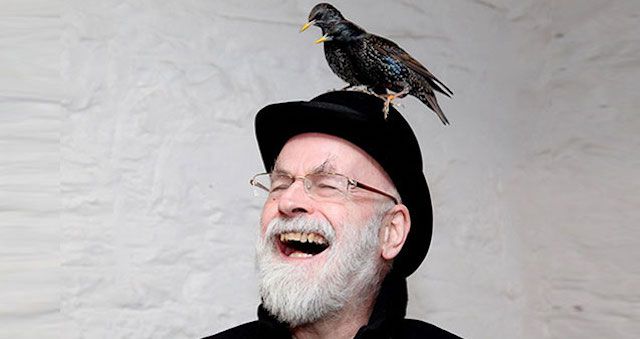 It’s my philosophy in life that there’s nothing a Terry Pratchett novel can’t help you with. His wit and wisdom intertwined so well that you can place your finger on nearly any page of his books and find something that you can both laugh at and find truth in. Here, we’ve compiled 40 of the best Terry Pratchett quotes organized by the ideal mood to read them in.

Whether you need advice, hope, or just a good chuckle, these quotes are sure to bring a smile to your face and the determination to get through whatever life throws you. 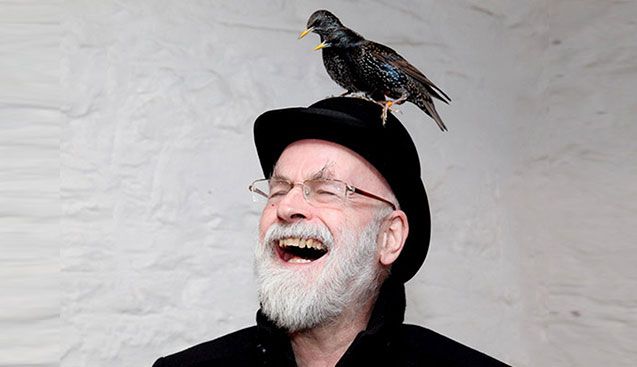 Terry Pratchett Quotes If You Could Use Some Sage Advice…

1. “It’s vital to remember who you really are. It’s very important. It isn’t a good idea to rely on other people or things to do it for you, you see. They always get it wrong.” (Sourcery)

2. “Evil begins when you begin to treat people as things.” (I Shall Wear Midnight)

3. “If you don’t turn your life into a story, you just become a part of someone else’s story.” (The Amazing Maurice and His Educated Rodents)

4. “Look, that’s why there’s rules, understand? So that you think before you break ’em.” (Thief of Time)

5. “If you trust in yourself…and believe in your dreams…and follow your star…you’ll still get beaten by people who spent their time working hard and learning things and weren’t so lazy.” (The Wee Free Men)

7. “The whole of life is just like watching a film. Only it’s as though you always get in ten minutes after the big picture has started, and no one will tell you the plot, so you have to work it out all yourself from the clues.” (Moving Pictures)

8. “Coffee is a way of stealing time that should by rights belong to your older self.” (Thud!)

9. “His philosophy was a mixture of three famous schools—the Cynics, the Stoics and the Epicureans—and summed up all three of them in his famous phrase, ‘You can’t trust any bugger further than you can throw him, and there’s nothing you can do about it, so let’s have a drink.’” (Small Gods)

10. “The trouble with having an open mind, of course, is that people will insist on coming along and trying to put things in it.” (Diggers)

11. “Getting an education was a bit like a communicable sexual disease. It made you unsuitable for a lot of jobs and then you had the urge to pass it on.” (Hogfather)

Terry Pratchett Quotes If You’re Having an Existential Crisis…

13. “God does not play dice with the universe; He plays an ineffable game of His own devising, which might be compared, from the perspective of any of the other players [i.e. everybody], to being involved in an obscure and complex variant of poker in a pitch-dark room, with blank cards, for infinite stakes, with a Dealer who won’t tell you the rules, and who smiles all the time.” (Good Omens)

14. “In the beginning there was nothing, which exploded.” (Lords and Ladies)

15. “What have I always believed? That on the whole, and by and large, if a man lived properly, not according to what any priests said, but according to what seemed decent and honest inside, then it would, at the end, more or less, turn out all right.” (Small Gods)

18. “THAT’S MORTALS FOR YOU, Death continued. THEY’VE ONLY GOT A FEW YEARS IN THIS WORLD AND THEY SPEND THEM ALL IN MAKING THINGS COMPLICATED FOR THEMSELVES. FASCINATING.” (Mort)

19. “Nanny’s philosophy of life was to do what seemed like a good idea at the time, and do it as hard as possible. It had never let her down.” (Maskerade)

20. “Joy is to fun what the deep sea is to a puddle. It’s a feeling inside that can hardly be contained.” (A Hat Full of Sky)

21. “Why do you go away? So that you can come back. So that you can see the place you came from with new eyes and extra colors. And the people there see you differently, too. Coming back to where you started is not the same as never leaving.” (A Hat Full of Sky)

22. “There have been times, lately, when I dearly wished that I could change the past. Well, I can’t, but I can change the present, so that when it becomes the past it will turn out to be a past worth having.” (I Shall Wear Midnight)

23. “Sometimes glass glitters more than diamonds because it has more to prove.” (The Truth)

24. “There’s always a story. It’s all stories, really. The sun coming up every day is a story. Everything’s got a story in it. Change the story, change the world.” (A Hat Full of Sky)

26. “A marriage is always made up of two people who are prepared to swear that only the other one snores.” (The Fifth Elephant)

27. “And what would humans be without love?”
RARE, said Death.” (Sourcery)

28. “It is said that your life flashes before your eyes just before you die. That is true, it’s called Life.” (The Last Continent)

29. “He’d been wrong, there was a light at the end of the tunnel, and it was a flamethrower.” (Mort)

30. “Do you not know that a man is not dead while his name is still spoken?” (Going Postal)

31. “Anyway, if you stop tellin’ people it’s all sorted out afer they’re dead, they might try sorting it all out while they’re alive. ” (Good Omens)

32. “We who think we are about to die will laugh at anything.” (Night Watch)

Funny Terry Pratchett Quotes If You could Just Use a Laugh…

33. “All tapes left in a car for more than about a fortnight metamorphose into Best of Queen albums.” (Good Omens)

34. “Some humans would do anything to see if it was possible to do it. If you put a large switch in some cave somewhere, with a sign on it saying ‘End-of-the-World Switch. PLEASE DO NOT TOUCH’, the paint wouldn’t even have time to dry.” (Thief of Time)

37. “It was sad, like those businessmen who came to work in serious clothes but wore colorful ties in a mad, desperate attempt to show there was a free spirit in there somewhere.” (Making Money)

38. “Five exclamation marks, the sure sign of an insane mind.” (Reaper Man)

39. “If cats looked like frogs we’d realize what nasty, cruel little bastards they are. Style. That’s what people remember.” (Lords and Ladies)

40. “I meant,” said Ipslore bitterly, “what is there in this world that truly makes living worthwhile?”
Death thought about it.
CATS, he said eventually. CATS ARE NICE.” (Sourcery)

Now that you’ve read some of the best Terry Pratchett quotes, why not enter (or re-enter) the Discworld? Check out this comprehensive reading guide for the Discworld series.