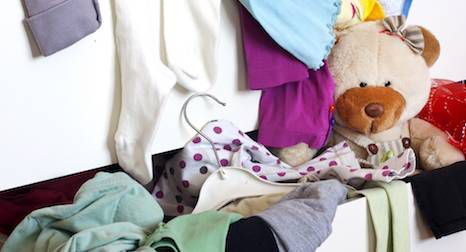 My first child is meticulous. She eats with utensils. Her books remain pristine no matter how many times she’s read them. Her bed is always made with stuffed animals lined up neatly and the bedspread smoothed out just so.

My second child is not like my first one. She eats with her hands. When I give her a book, she reads it and returns it with sticky covers and bent pages. She’s never once made her bed.

And we also love books about big messes! Check out these ten great picture books for messy kids. 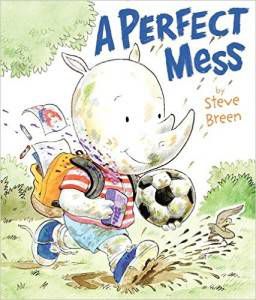 Henry McHenry is one messy rhino, but he tries his best to stay clean for a very important day. He jumps over a mud puddle (and splashes his friend), passes on a gooey jelly donut (just in time for a glob to land on his neighbor), and even manages to shake the ink from his leaky pen (all over his classmates).  And while Henry is still neat and tidy at the end of the day, his classmates are anything but . . . 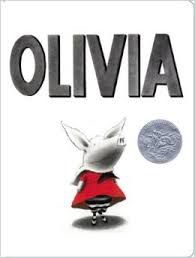 Have fun with Olivia…

going to sleep at last. 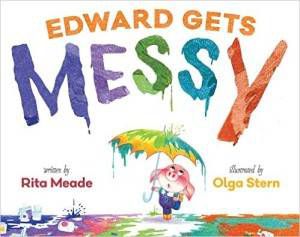 Edward the pig never pets friendly dogs on the street. He never, ever eats food that spills or splatters. And he never, ever, EVER uses markers or glue sticks or paint. They are just too messy. But what happens when—GLOOP!—a big tub of paint falls on Edward’s perfectly neat little head? Well, it might just turn out that getting messy has its upsides, too. After all, even particular pigs can clean up afterward. 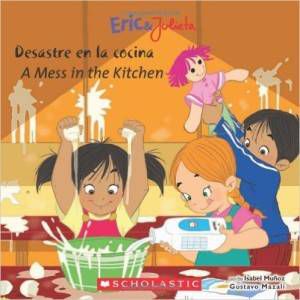 Julieta has a playdate with her friend Lupe and won’t even look at her brother Eric. When he tries to get their attention, he succeeds, but not in the way he first intended, and it’s a mess!

Eric is dying to play with his sister Julieta and her friend Lupe, but won’t admit it. So he tries to hide one of Julieta’s dolls on top of the kitchen shelves… unfortunately, as he climbs up he trips and falls with a loud thump! The girls come to find out what happened, and Eric, to hide his prank, gets them to make cookies for everyone. The idea is as wild as the mess they’re about to create. 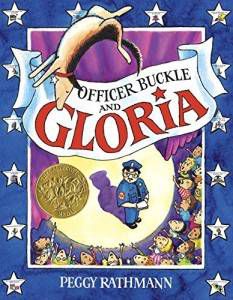 Officer Buckle, a mustachioed policeman who wears a crossed-out-banana-peel patch on his sleeve, has a passion for teaching students about safety, but his audiences tend to doze off during his lectures. They awaken, however, when police dog Gloria joins Buckle onstage. As Buckle speaks, Gloria-behind Buckle’s back-mimes each safety lesson (e.g., leaping sky-high for “Never leave a thumbtack where you might sit on it!” and making her fur stand on end to illustrate “Do not go swimming during electrical storms!”). School safety increases tenfold and Buckle and Gloria find themselves in great demand. But when he finally learns of his sidekick’s secret sideshow, Buckle’s feelings are terribly hurt. Rathmann’s high-voltage cartoons, outlined in black ink for punchy contrast, capture her characters’ every feeling, from Gloria’s hammy glee and Buckle’s surprised satisfaction to Gloria’s shame at having tricked her partner. In a sound and sensitive conclusion, Gloria’s disastrous attempt to go solo inspires Buckle’s “best safety tip yet”: “Always stick with your buddy!” (Publisher’s Weekly) 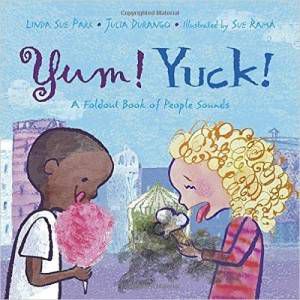 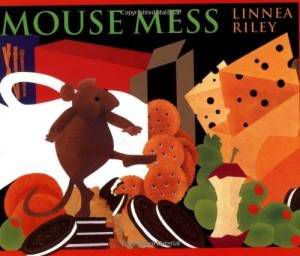 When a mouse ventures out for a nighttime snack, he turns the kitchen into a midnight mess. He’s just waking up, in fact, as the human family toddles off to bed, and the kitchen is his playground. Riley uses bold colors for her cut-paper collages and almost life-size proportions to include readers in the mouse’s illicit feast. Cookies, crackers, and cornflakes join olives, peanut butter, and cheese, cascading like a waterfall from the counter to the kitchen floor. When the mouse’s pig-out is complete, he cleans himself up using a teacup for a tub. He’s ready for bed by morning, just as the family rises to discover the food fiasco he has left behind. A tasty frolic. (Kirkus Reviews) 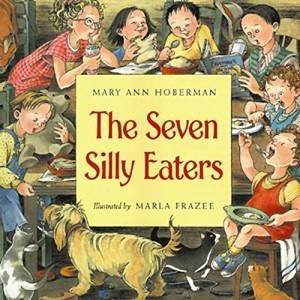 Peter wants only milk, Lucy won’t settle for anything but homemade lemonade, and Jack is stuck on applesauce. Each new addition to the Peters household brings a new demand for a special meal.
What’s a mother to do? Even though Mrs. Peters picks, peels, strains, scrapes, poaches, fries, and kneads, the requests for special foods keep coming. It isn’t until her birthday arrives that a present from her children solves the problem with a hilarious surprise that pleases everyone. 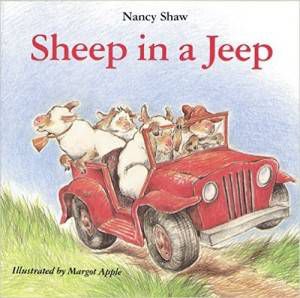 Sheep in a Jeep by Nancy E. Shaw

Beep! Beep! Sheep in a jeep on a hill that’s steep.
Sheep in a Jeep is well-loved by the preschool and early-reader sets for its slapstick story of five sheep (in a jeep) and silly sound effects—especially when the jeep goes splash and thud in the mud! Nancy Shaw’s rollicking rhymes are Seuss-snappy, and Margot Apple’s appealing pencil illustrations are expressive and hilarious. Shear delight. 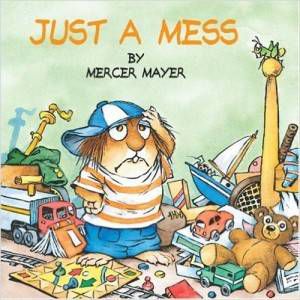 Just a Mess by Mercer Meyer

Little Critter can’t find his baseball mitt, so his mom suggests he clean up his room. After picking everything up and shoving it into the closet or under his bed, he eventually finds his mitt. A silly book meant to reflect how most kids really want to clean their room.