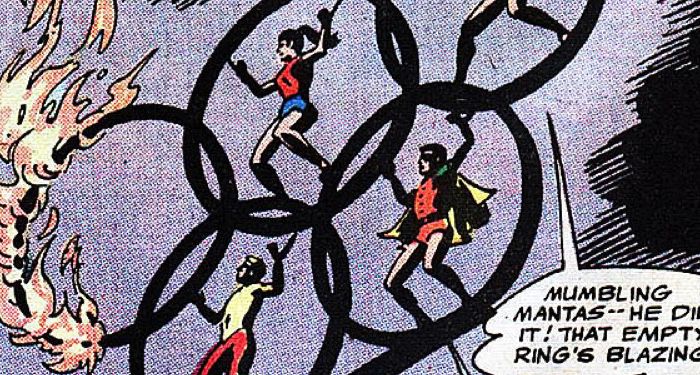 After a pandemic-induced year-long delay, the 2020 Tokyo Olympics are set to begin on July 23. The last time Tokyo hosted the Olympics was back in the summer of 1964. By a neat coincidence, DC published The Brave and the Bold #54 around the same time. This issue featured a team-up adventure starring Robin, Kid Flash, and Aqualad. Along with Wonder Girl (and Speedy, via retcon), these kid sidekicks would go on to form the Teen Titans, making their official debut in Teen Titans #1.

It therefore makes total sense that the Teen Titans would get involved with the ’64 Summer Olympics.

Teen Titans #4 is a flashback story entitled “The Secret Olympic Heroes.” Speedy, making his first appearance in a Titans comic, barges into the Titans’ headquarters, which at this point in their history is a random cave somewhere. Apparently, he had to ask Green Arrow for the location, and Green Arrow had to ask Batman, who gave it to him in a surprising display of egalitarianism.

What was so important that Speedy couldn’t just call the Titans on the phone? He’s going to perform at the opening ceremony! But something funky is afoot…

I love how none of this makes any sense whatsoever. Why is Japan asking an American superhero to perform at their opening ceremony? Why did they wait until the last minute to ask? And why is Speedy slurping from a puddle like a gazelle at a watering hole? Did they not have water bottles in 1964?

And then there’s the villain “plot,” if you want to call it that. Speedy’s act is nearly sabotaged by Diablo, an “international organization dedicated to hate and distrust.” They are so infamous that no one has bothered to mention them before or since. Their big idea to wreck the Olympics is to replace one of Speedy’s arrows with an explosive one, because they somehow think the expert archer is not going to check his own equipment before showtime.

But Diablo aren’t the only ones out to rain on the parade of nations: the Titans have also been recruited by Ted Bradley to find his son Davey, who is America’s best hope of winning a gold medal in sprinting. Davey took off in the middle of a meet and, once the Titans find him, refuses to compete.

The Titans plus a disguised Davey fly out to Japan, where they are instantly greeted with a bomb. Diablo has beaten them to Japan and, as the Titans quickly discover, they have a whole boatload of plans to ruin the games. That night, as Speedy practices his act, the other Titans are captured one by one by Diablo agents who are trying to rig the pool to give electric shocks, among other, equally quaint methods of sabotage. They all end up tied within the Olympics rings, which a blindfolded Speedy is preparing to set on fire.

This is why no one invited you to join the team full-time, Speedy.

Fortunately, Davey sees what is happening and sprints to the rescue, in the process outrunning his athletic rival (and Diablo member) Kravik. Kravik is the only non-American character with dialogue beyond a cliched phrase (“Banzai!” “Mais oui!”), a fact I bring up because it goes against what the Titans are fighting for: a society that promotes cooperation and harmony between all nations.

Casting your only non-American — with a Slavic-sounding name, no less — as a villain may seem counterproductive, but it’s not all that surprising. Like many ’60s comics, Teen Titans #4 tries to fix things both ways: they want to stand for unity between East and West, but they also want their heroes to beat the crud out of the Russians, betraying the fact that they don’t want “unity” as such but rather American domination. Oh, Cold War shenanigans. Never change.

Wonder Girl manages to break the Titans out of the rings (and destroys them in the process, forcing the Olympic committee to scrap Speedy’s act). They defeat Diablo and stick around long enough to watch Davey win bronze, which his father — who learned off-panel not to be a jerk — is more than happy with.

This comic is pretty typical of early Teen Titans stories in that it is silly but fun and full of slang no real teenager ever used. It was cool seeing Speedy’s first appearance in the book, as well as the incorporation of a real-world event. I feel like they missed an opportunity, though. If you’re going to feature the Olympics, why not include cameos from real athletes, or at least reasonable facsimiles thereof? But again, the Titans’ early adventures are goofy, not ambitious.

Now that we’ve returned from that trip back in time, take this quiz to find out which Teen Titan character you are.