There is a subplot in the 1999 movie 10 Things I Hate About You in which a character is obsessed with William Shakespeare, declaring herself in love with him, and another character asks her to the prom as Willy Shakes himself.

Modernizations of classics are wild, y’all. You can do anything! (She says, fingers crossed, while writing a modernization of a classic.)

Of course, Katherina and Bianca are not in high school in The Taming of the Shrew. But high school is the perfect analog for the drama and intrigue of just about any Shakespeare play. 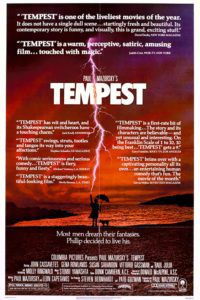 Shakespeare’s most famous teenage girl is obviously Juliet, but his best may be Miranda. In The Tempest, Miranda suffers her father’s whims and just wants what every teenager wants, which is some nebulous combination of independence, acknowledgment, and, in her case, a cute boy. In the 1982 film Tempest, Molly Ringwald plays Miranda to John Cassavetes’s Prospero stand-in, Phillip Dimitrius. The story was modernized (for 1982) and took place largely in Greece, where Dimitrius takes Miranda and moves in with Athena (Susan Sarandon in the film’s Ariel analog) until a shipwreck brings his wife (played by Cassavetes’s real life wife Gena Rowlands) and her lover Alonzo to the island, along with Alonzo’s hot son Freddy (Ferdinand, played Sam Robards, son of Jason Robards and Lauren Bacall).

The movie is very much literary fiction in moving picture format, but like…in a good way, mostly? I mean, I definitely don’t need any more movies about New York City architects having midlife crises, but this one has been around for nearly 40 years so I think it can stay. I do wish there was more Miranda, though.

There aren’t many other canonically teenage Shakespeare characters who’ve made their way to film (again, other than Juliet), but that hasn’t stopped filmmakers from using Shakespeare’s plays to tell stories about teens. 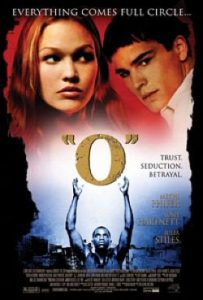 In 2001’s O, prep school basketball provides the setting for the jealousy and revenge of Othello. Renamed Odin, the titular character (Mekhi Phifer) is beloved by the team coach even above the coach’s son—and Odin’s friend—Hugo (Josh Hartnett), an updated Iago. Hugo talks Roger (Elden Henson) into lying to the dean of the school (John Heard) about Odin’s relationship with Desi (Julia Styles in the Desdemona role), saying that Odin raped her. Roger agrees because he has a crush on Desi and Hugo convinces him he can steal her from Odin. (And that is literally all in the first five minutes of the movie!) This study of toxic masculinity may or may not have been intended as such, but it succeeds nonetheless, making it extremely uncomfortable to watch. Not to mention, of course, that things do not go well for anyone in this story. 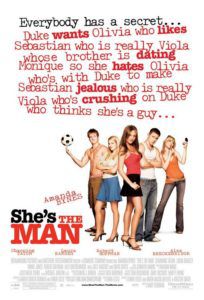 In She’s The Man (2006), Viola (Amanda Bynes) assumes her twin brother Sebastian’s identity when her school cuts the girls’ soccer team and the coach won’t let her try out for the boys’ team; her soccer star boyfriend Justin (Robert Hoffman) backs the coach up; and Sebastian (James Kirk), who is starting at a new boarding school where no one knows him, sneaks off to London for two weeks at the beginning of the school year. Her plan? Get onto his school’s soccer team as him and beat her own school’s team at their rivalry game in two weeks. Yeah, it’s convoluted, but no more so than the Bard’s plotting. Naturally, Viola develops the feels for her roommate Duke (Channing Tatum) and his crush Olivia (Laura Ramsey) develops the feels for Viola, who she thinks is Sebastian. Shenanigans!

As far as such a complex and absurd web of plot lines goes, She’s The Man handles it all pretty well. Viola-as-Sebastian behaves in alternating stereotypical dude fashion and as a pseudo-feminist, and I admit that I wished she would just pick one—why not teach Duke and her other new friends how to be better men?—but Amanda Bynes is so funny that I kind of don’t care. 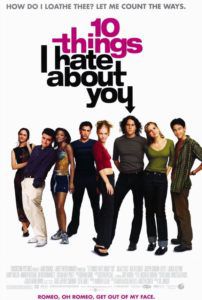 Which brings me back to 10 Things I Hate About You. The most meta of the Shakespeare updatings (probably). Not only is there the girl-in-love-with-Shakespeare-himself subplot, but Kat and Patrick are studying Shakespeare’s sonnets in Mr. Mitchell’s English class and when Kat wants to win Patrick back, she writes her own sonnet for him. While that scene may not be quite as memorable as Patrick bribing the marching band, taking over the school’s PA system, and singing “Can’t Take My Eyes Off Of You” to Kat, it’s a very good love declaration.

I clearly have a preference for the comedies, but either way, I would like more Shakespeare modernizations set in high school, please.

Romeo + Juliet (1996) uses the original language and disguises the modern settings in clever ways, including the famous costume party where the doomed lovers meet and the naming of Benvolio and Tybalt’s guns as “sword” and “rapier.”

Hamlet (2000) uses the original language in a hyper-modern setting and kinda sorta invents vlogging for the famous soliloquy. Julia Stiles appears yet again in this one, playing Ophelia. Karl Geary’s Horatio delivers Shakespeare’s words so casually that I genuinely believe a modern young man would talk that way.

Much Ado About Nothing (2012) also uses the original language and has the most straightforward modern setting (most likely because it was shot on a super low budget at the director’s house). It is largely forgettable, in my opinion.