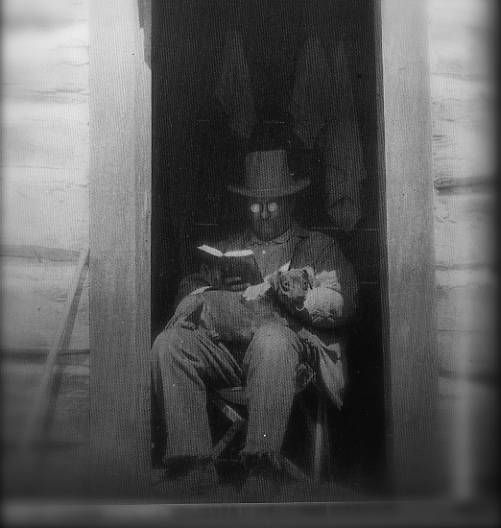 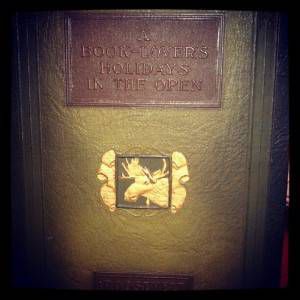 On a trip to Boston last week, I stumbled upon–and promptly ducked into–Commonwealth Books. Tucked in an alleyway, it is the Platonic ideal of used bookstores, and in the magical way that used-book shops have, it bestowed upon me the perfect book I didn’t know I needed: Teddy Roosevelt’s 1916 memoir, A Book-Lover’s Holidays in the Open. (And yes, it smells as delightful as you think a book from 1916 would smell.)

I knew Roosevelt had authored books, but I didn’t expect this topic when I picked up a volume with his name on the spine. I mean, when I think of Teddy Roosevelt, I think of (besides the whole he-was-a-president thing) Amazon adventures and African safaris and general swashbuckly badassery. But look at that title! The implication that Roosevelt considered his adventures to be mere holidays from his bookish life makes me happy in at least nineteen different ways. “I feel that way, too!” I want to tell him. We are kindred spirits already. And it gets better!

In the foreword, Roosevelt tells us that a man going on holiday “will take books with him as he journeys; for the keenest enjoyment of the wilderness is reserved for him who enjoys also the garnered wisdom of the present and past.” So, reading is not an escape from the world or an excuse for not engaging with it; reading is a way to enrich our experiences in the world and to put them in greater context. I would add, also, that reading makes us want more of the world. This is good stuff, Teddy, so I’mma forgive you for the exclusionary language and let you finish.

In between chapters with titles like “A Cougar Hunt on the Rim of the Grand Canyon” and “The Hopi Snake Dance,” there’s one called “Books for Holidays in the Open.” (You can read it online at Bartleby.) It should come as no surprise that our man Teddy is asked often what kind of books he recommends people take on trips. His response? “With the reservation of long trips, where bulk is of prime consequence, I can only answer: The same books one would read at home.” YOU GUYS, Roosevelt was thinking about how best to pack his books A HUNDRED YEARS AGO. That’s pre-airlines and the mortal terror of discovering your bag weighs in at 51 pounds.

And what about general book recommendations? Teddy wisely observes that “the equation of personal taste is as powerful in reading as in eating,”–I nod vigorously, food being another language I speak with great enthusiasm, if not total fluency–and he goes on, “within certain broad limits the matter is merely one of individual preference, having nothing to do with the quality either of the book or of the reader’s mind.” I italicized that shit because it. is. important! We like what we like, and it is neither a credit to our character nor a revelation of what Teddy calls our “moral turpitude.” Taste just is. Remember that the next time you’re about to get all angsty because someone whose opinion you value says they thought a book you loved was bad.

But literature isn’t a completely lawless land. Roosevelt advises that we not read “what is vicious or even simply worthless,” and he notes that “trivial and vulgar books do more damage than can possibly be offset by any entertainment they yield.” However, he doesn’t provide any operational definition of “vicious,” “worthless,” “trivial,” or “vulgar.” I interpret this statement as a variation on the “garbage in, garbage out” theme and think Teddy would trust us to know our garbage when we see it. “Don’t read something you’re not going to get anything out of” is how I take it, with entertainment (or even, gasp, erotic excitement–Teddy was a man of the world, and I’m sure he knew some things) being a perfectly reasonable desired outcome for a reading experience.

At this point, I can’t decide if I want to make out with Teddy Roosevelt for having figured this stuff out A HUNDRED YEARS AGO or beat my head against the wall over the fact that we are still having these handwringing conversations today. And we think we’re so clever for it! Tell me more, Teddy, and come a little closer while you’re at it.

“Another matter which within certain rather wide limits each reader must settle for himself is the dividing line between (1) not knowing anything about current books, and (2) swamping one’s soul in the sea of vapidity which overwhelms him who reads only ‘the last new books.'”

That’s it. I’m dragging Teddy into the stairwell for a full-on snogging in which I will be the Angela Chase to his Jordan Catalano. Here I’ve been, thinking that the tension I feel between my inclination to read new releases in order participate in the cultural conversation about them and to read deep into the backlist for my personal edification was a product of my life in the literary blogosphere, when dude was wrestling with the same thing A HUNDRED YEARS AGO and thinking some pretty smart thoughts about it.

So it looks like our modern #readerproblems aren’t so original. Maybe some readerly experiences are timeless, universal. That’s a nice thought, isn’t it, that we’re all in this mess together? If you’d like to find some new issues, be my guest. In the meantime, I’ll be here hanging out with Teddy Roosevelt until my next holiday in the open.