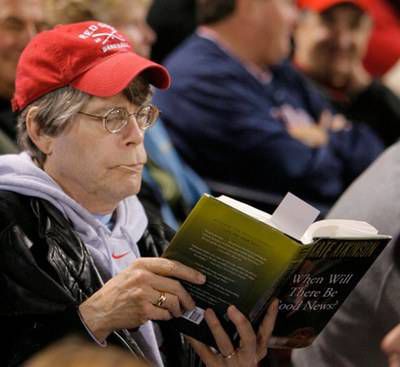 I am the worrywart owner of both a Kindle Paperwhite and a Kindle Fire, paranoid about damaging them (my children do not share my concern). So I still do most of my reading out of the house via paper and ink medium. I keep a roaming Little Library in my car, and spend a lot of time reading hardcovers and paperbacks while my kids play on the weird little playground the shopping center we visit once a week installed in the middle of the parking lot.

These books are as well preserved as I can manage, but there was a time when I regularly committed crimes against books: I’d snap the binding of a paperback in half, turning a whole text into a series of little chapbooks, Volumes I and II, sometimes Vol. I-III or even IV.

At school, I would keep one of these slices of literature in my pocket (shorts, jorts, whatever; it was the ’90s). I’d slide the fragment out, lay it on the textbook before me, tilt it all up a bit, and ignore what was being taught at that moment. That, and my reluctance to complete most homework, explains several years of marks.

Growing up in Killington, Vermont, The Beast Of The East, United States Of Skiing, I had little choice but to spend most weekends from October to May on a pair of skis (I converted to snowboarding in college). I shared countless chairlift rides with smotherfaced New Yorkers and New Jerseyans; I convinced many of these people that I was a member of the Republic Of Ireland National Ski Team, training for the Olympics.  This was achieved through two means:

1) possession of a ski pass with a flamboyantly Irish name (see byline),

2) just enough of a fake Irish accent to appear real (avoid imitating the Lucky Charms leprechaun, not a single Irishperson I’ve met sounded like that).

But mostly I kept to myself and read: Anne Rice, Richard Matheson, Kurt Vonnegut, John Bellairs, and lots and lots of Stephen King. I would slip my outer glove in my pocket, pinch the remains of the book I had desecrated in my thin-gloved fingers, and read by the Vermont sun: sometimes blue skies and snowblindingly bright, often gray and matte under the clouds that brought us so much snow.

What I read influenced how I saw what was before me: snowcovered trees were monsters in white cloaks, ready to leap up and attack me. The whirring and rumbling of the chairlift was the noise of starships, or a mechanical gallows. When the fog came over the Green Mountains, it was a mysterious mist, holding tentacled monsters, or Langoliers, devouring everything that had the misfortune of being in their way.

Basically, I was a weird kid. No shame in my game.

On one memorable occasion, I was sloppy in my tearing: it was a copy of The Tommyknockers by Stephen King. I had merely snapped the book in two, which meant the two volumes I rudely made were over 400 pages apiece, or the thickness of a more common novel. I stuck the halfbook in my parka pocket after my trip up the mountain, then began my descent. Eastern skiing is known for its often rough conditions, and about halfway down the mountain, I caught an edge on a large chunk of ice (“death cookie” is the local nomenclature) and fell. The mix of velocity, ice hardness, my growing weight at the time, and Mr. King’s impressive mid-1980s word count, resulted in my breath getting knocked out.

I laid on the frozen ground for some time, gasping for air. Blood either rushed to or rushed out of my eyes, because everything became gray and sparkly. Then my innards corrected themselves, and everything went back to looking normal again (well, there was a tree that seemed somewhat sinister). I took the book out, broke it in half again, and padded both my lungs this time.

With a Kindle, I’d have a much shorter, slightly less traumatic, story.  Where’s the fun in that?