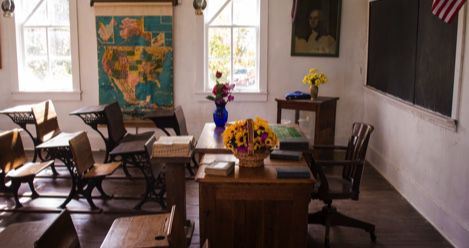 Romantic or sexual relationships between teachers and students have piqued readers’ curiosity since medieval French philosopher Abelard’s letters to his student Heloise. In fiction, the taboo, secretive nature of these relationships can raise the stakes and make for compelling, shocking reads. In real life, though, these relationships would obviously be illegal if the students were underage—and still unethical if between adults. In the recent TV series of Pretty Little Liars, twenty-something actors play high school students, making teacher Ezra Fitz appear much less predatory than he would be in reality.

What Was She Thinking? by Zoe Heller (adapted into the movie Notes on a Scandal) depicts the fallout of a clear case of statutory rape. Even when the current or former students are over 18, the power imbalances and ethics violations persist. Although their scandalous nature can be shocking, we should probably examine these stories more critically. They often romanticize a huge abuse of trust and power.

Set in 1955 at a private, all-girls’ school in Connecticut, this coming-of-age novel contains a vivid setting and believable character development. The relationship between Charlotte and her English teacher, Brian, escalates slowly. Because of their emotional connection and their closeness in age, some readers may find this story sympathetic. (By the time their relationship crosses a line, she’s 18 and a graduate, and he’s 28.) Despite the nuance in the writing, Brian is still a sexual predator who takes advantage of Charlotte’s vulnerability.

Carolina “Nine” Livingstone is obsessed with astronomy and Emily Dickinson, finding that she has little in common with her classmates. Her relationship with a teacher, Mr. Mann, seems rushed, which downplays just how predatory he is. As in Flanders Point, the relationship becomes sexual after the student’s 18th birthday—but that still doesn’t negate the power imbalance or the teacher’s responsibility. The inappropriate emotional boundaries that these fictional teachers cross with students groom or manipulate them for sexual relationships as adults.

The ending also seems contrived. By unexpectedly making Mr. Mann do something heroic, the novel attempts to rehabilitate him at the last minute.

When the protagonist, a middle-aged professor named David Lurie, has an affair with a student, this book focuses almost exclusively on the impact on his career and life. The entire book is told from Lurie’s perspective, without describing the effect on the student. In the wake of #MeToo, this 1999 Booker Prize–winning novel has aged poorly politically, though it still contains beautiful writing. It also glosses over the racial and political dynamics of its setting, post-apartheid South Africa.

Off Limits: 7 Books About Professor/Student Relationships