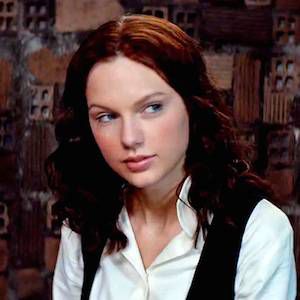 I just found out Taylor Swift is in the cast of The Giver, and you guys, I have SO MANY questions.

Last week I hopped over to IMDb after watching the awesome new official trailer to tally up all the stars I love — Jeff Bridges, Meryl Streep, Katie Holmes, Alexander Skarsgård…. That’s when I noticed Taylor Swift’s name right under Jeff Bridges’ and did a double take, because wha? She’s superfamous and she wasn’t even in the trailer!

(It turns out Taylor Swift IS actually in the trailer, for literally one fraction of one second, if you hold your eyelids open so you don’t blink at around 0:58.)

I’m having a really hard time putting my finger on why exactly Taylor’s role is not computing in my brain, and I’m definitely not hating on her being in the movie. It’s just so WEIRD to me. Does anyone else think it’s weird? Like, even weirder than RZA from the Wu-Tang Clan being in the movie Ghost Dog?

Maybe it’s weird because The Giver is So. Serious. but Taylor Swift is such a wild card as an actor. There was that one time she was on a random episode of New Girl, and then an equally random role on CSI. Her other two acting credits are The Lorax and Valentine’s Day, the end.

Maybe it’s weird because Taylor’s role has been so downplayed in the trailer and because hair and makeup took such pains to make her look so un-Taylor-Swifty with her chaotic brown wig and un-made-up face. It makes me wonder if there were split camps and DRAMA at the film studio: Team Taylor and Team Not Taylor. So they compromised by casting her but kind of sweeping it under the rug?

Then there’s the matter of Taylor’s character, who is so minor that I don’t even remember her from the book: ROSEMARY: DAUGHTER OF THE GIVER. I guess she is angsty and musical and comes to a tragic end after failing to follow in dad’s footsteps? I’m dying to know how much screen time Rosemary gets and how many lines she has, now that she’s being played by a world famous multi-Grammy award-winning singer songwriter.

The marketing people are clearly on board with Taylor Swift’s name recognition — check out the book jacket for the movie tie-in-edition with a big fat shiny seal: “Includes exclusive Q&A with Taylor Swift (and others)!” It’s practically the biggest thing on the cover, you guys.

And, not to let the movie producers and book publishers get all the action, librarians have endorsed Taylor Swift’s full takeover of the bookternet by announcing her brand new READ poster holding — you guessed it — The Giver (not the movie tie-in-edition).

I really wish I could’ve been a fly on the wall during all the back alley discussions while agents and actors and producers wheeled and dealed. There’s a half-baked explanation about Taylor’s casting that The Washington Post published in May, but we all know that’s not the real story, not all of it anyway.

Has Taylor Swift been looking for the perfect movie role to launch her into Jennifer-Lawrence-esque acting cred? Is The Giver her absolute favorite book of all time and she told her agent to do WHATEVER had to be done to get her in? Did large sums of money exchange hands — and whose? — to seal the deal and secure Taylor’s spot in a minor role that barely registers a blip in Official Trailer #2?

Is that a thing that happens in Hollywood?

What do you guys make of Taylor Swift’s role in The Giver and stealth takeover of the bookternet?