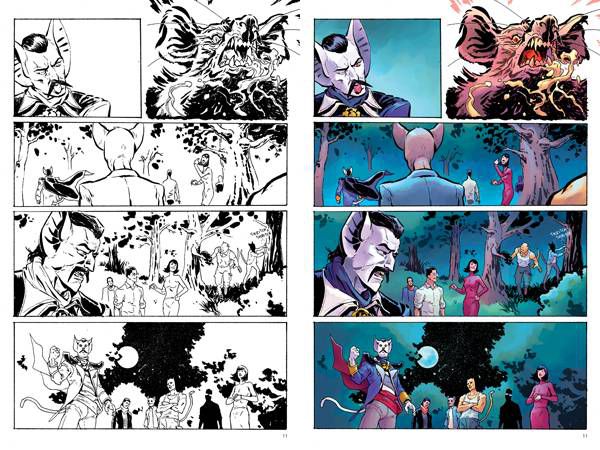 Whenever there’s talk about comics, there’s often this tendency to credit only the writer and pencil artist, almost as a sort of short hand for the entire team of people who work on any one book. And while a specific writer might bring something truly special to a character, or a particular artist might show us a different way of looking at the action, they usually don’t work alone, and everyone’s role isn’t always just what they’re credited for on paper. This is one of many reasons why it’s important to acknowledge everyone else, too: the inker, colorist, letterer, and others. Everyone brings something invaluable to the table without which the comic you’re loving simply wouldn’t be the same.

I had the opportunity to interview Tamra Bonvillain, the colorist working on Angel Catbird along with Margaret Atwood (writer), Johnnie Christmas (line artist), Nate Piekos (letterer), and some brilliant editors. When I asked her about spreading more awareness of the issue of crediting colorists, she said, “For coloring, I’ve often tried to show examples of the black and white art versus the finished colored pages, usually in stages.” This is a brilliant tactic when the line art is available. “I think some people just genuinely don’t understand how much a colorist adds to the page, and showing what it looked like before seems to be the best way I’ve found of expressing that to people.” Throughout this article, you’ll be seeing pages from Angel Catbird vol. 2, supplied by Tamra, showing before and after colors so you can see what she means. 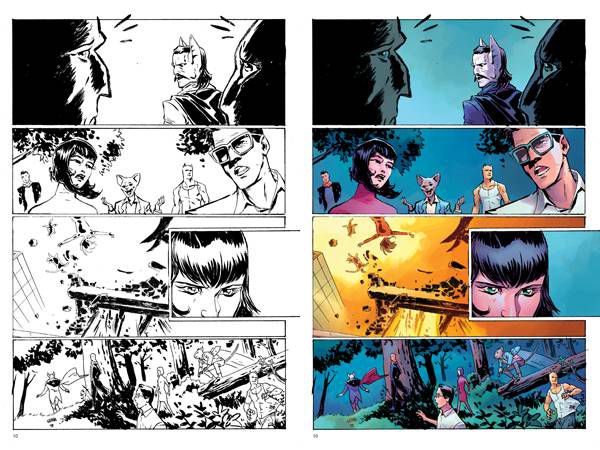 Just in this image above, you’ll notice that the use of color, specifically the orange in the lower half panel layout emphasizes the trauma of a recollection. In other cases, you might find that certain colors kind of “signal” places or settings. Tamra confirms this is part of her process: “I try to make locations and specific scenes stand out from one another by making certain colors dominant, or by modifying the coloring approach some way. Ideally, it should be instantly recognizable by color alone. This works better on projects where I can go more stylized, so I can really push the colors, making the differences more pronounced. Even when colors are more down to Earth, I try to signal differences, just more subtly. ”

Now, you might be asking, how much of this is really at the discretion of the colorist, versus what’s been story-boarded, what other people on the team have decided should be emphasized, and how some things will be interpreted? Aren’t a lot of these things agreed upon ahead of time? “I’d say it’s mixed,” Tamra says. “Sometimes, I get very little direction up front, and it’s almost entirely up to me to define the look of the colors on my own. Other times, we discuss it a bit more, and we work at the approach before moving forward. Often, someone will have character designs or particular things in mind for locations, but it’s usually general information that I choose how to interpret.” Which is to say, colorists don’t just get a sheet of instructions detailing stuff like, “Rose’s home is red and Violet’s shirt is blue.” They absolutely add their own definitive brand to the work, more than simply making the difference between line art and colorful pages.

Digging further into the point, I asked, hypothetically, if some comic trade volume came out where the entire team was static except for the colorist, what might happen? “Assuming they weren’t trying to emulate the other colorist’s style, I think it could look quite different. Like mentioned earlier, maybe they have different methods for signalling scene changes. Maybe they choose to emphasize certain beats different ways. They could be more literal with color, or more abstract and expressive. The style might be flatter or more rendered. They might favor certain palettes over others, cooler, warmer, more neutral. There are so many different ways to handle color.”

There are two other questions about process that I asked. First, how does a colorist choose projects? In Tamra’s case, it looks like she can be picky: “Nowadays, I have to say no to so many things based on my schedule more than anything. I don’t really actively pursue projects, I just kind of settle in with the people I enjoy working with, and occasionally I receive offers from new people. If my schedule allows and it’s a project that sounds interesting to me, and I think I would work well with the artist, then I’m down. In the past, I have taken almost everything that’s come my way, but I’m trying to be more selective, so I can more efficiently use my time.” 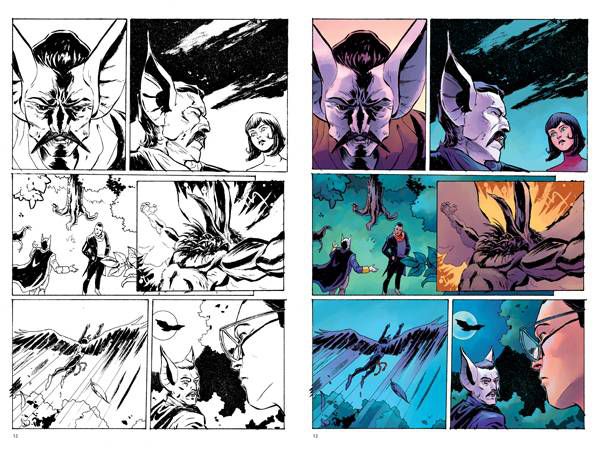 And then, is it challenging working on a book with people you’ve probably never met, and probably won’t meet during production? I’ve found that many of the comics I read are this awesome collaboration between people who live in completely different places. How does that work? As it turns out: it’s no sweat. “I’ve never really found it to be terribly difficult to work with people even when I’ve never met them, and in some cases, have little contact with while working. I do think it can help to have a closer relationship, though. Say, on Nighthawk, I was working with my friend, Ramon Villalobos, and we’re part of a group call with several other comics creators, so we would talk over color ideas all the time.” I figured that it’s probably the case that certain dynamic duos like to take jobs together when they can, but otherwise, things turn out just fine. 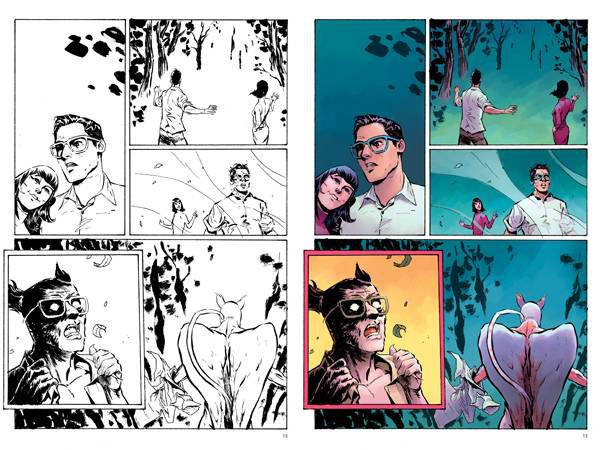 Since this is a spotlight on Tamra as well as a post about colorists in general, I also went ahead and asked her a few questions about her career and her inspirations. Here’s the rest of our interview:

KP: What were some of your favorite comics growing up? Did any of them inspire you on your career path?

TB: As a kid, it was a lot of standard stuff like X-Men, Spider-Man, etc. A lot of cross pollination from the cartoons based on comics from the early 90s. All that stuff got me really interested in comics, and from a pretty young age, I had an interest in working in comics.

KP: Are there any colorists in particular whose work you love? What about them?

TB: There are so many. Dave Stewart’s stuff on Conan when I started up at Dark Horse was maybe the earliest time I really paid attention to color in comics. It was very beautiful and painterly. There are obvious ones nowadays like Jordie Bellaire and Matt Wilson who seem to be everywhere and do consistently amazing work. I could go on and on. There are many more, and they all have their unique signature styles that I find interesting for different reasons. 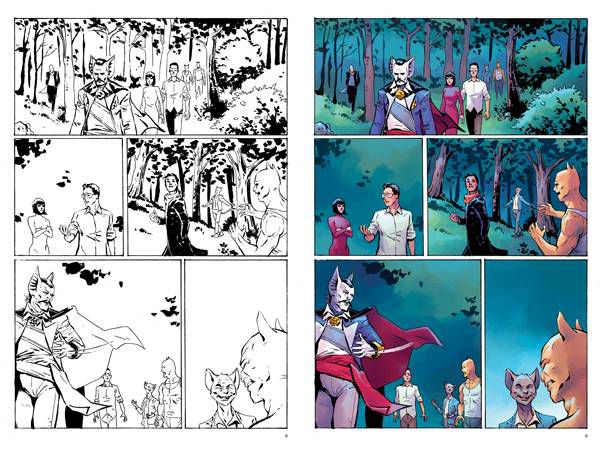 KP: Are there any particular people out there you’d love to work with? Specific pencil artists you’d like to color for, writers you’d like to partner with, or the like? And yeah, I know, working with Margaret Atwood is already pretty much a dream come true.

TB: It’s been a pleasure working with Margaret Atwood, and Johnnie as well. Johnnie and I have worked for a while previous to this, and he’s one of my favorite artists to collaborate with. I get excited by working with new artists all the time, and what it will bring out of me. Stuart Immonen’s stuff looks like fun to color. As for writers, Brian K Vaughn would be interesting to work with, I think. I’ve worked with Marguerite Bennett and Justin Jordan both in the past. I’d love to team up with them again, as well. I feel guilty, because I’m so bad at conjuring up specific names when asked these questions. There are a ton of other artists and writers I’d love to work with again or for the first time. 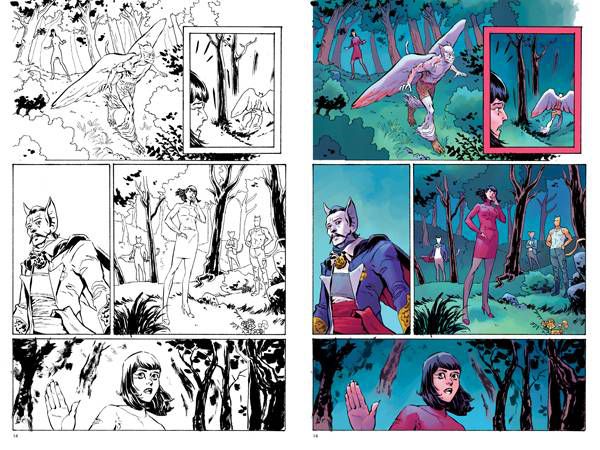 I hope you’ve enjoyed this insight into the work of a colorist! A big thanks goes out again to Tamra for taking the time to do this interview, and if you haven’t already, check out Angel Catbird and tell us what ya think!