Vanessa Williams became Miss America in 1984. She was the first black woman to wear the title. For dozens of girls growing up, she represented a dream they could reach. Tami Charles was one of those girls, now a published author. 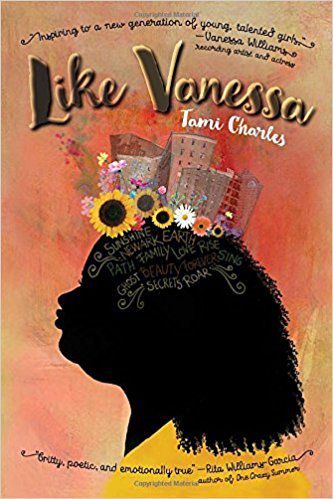 Charles’s new book, Like Vanessa, details how a young girl decides to pursue her pageant dreams. She’s also named Vanessa, and she can sing beautifully. Young Vanessa Martin doesn’t know if she has what it takes, however, or if her dream is possible. Most of her family believes in her, and most of her school doesn’t.

A good numbers of girls have seen themselves in the fictional Vanessa, while the real Vanessa Williams has given her stamp of approval:

Congrats @TamiWritesStuff on your debut novel LIKE VANESSA! What an honor to be the focal point of a book that hopes to inspire a new generation of young, talented girls. Hits shelves March 13!

Tami Charles sat down with Book Riot to talk about her book, and about the importance of representation.

As an author, how are your thoughts on Vanessa Williams’s iconic win similar and different from Vanessa Martin’s thoughts?

My novel tells the story of a thirteen-year-old girl who witnesses the historic moment of Vanessa Williams’s Miss America win. That sets her on a path to follow her own unlikely dream of winning her school’s very first pageant. I think the biggest difference is that my character was thirteen in 1983, whereas I was a bit younger. That doesn’t matter though. I still fangirled right along with Vanessa Martin and every other girl who lost their minds when they saw a woman of color finally win the crown. It was such a defining moment that yes, black and brown girls are beautiful, talented, and important, too.

Vanessa Martin reads Toni Morrison and Maya Angelou, referencing their respective works The Bluest Eye and I Know Why the Caged Bird Sings. Do you think kids can handle heavy reading material better than adults can?

As a former teacher, I’d say that adults play an important role in preparing students for heavy reading material. I read both of these books around Vanessa Martin’s age, but the key was that my mother, a former school principal, had already read them and prepared me for the gravity of the issues presented in the novels. This allowed for questions and discussion as I read along. So, I’d definitely say that adults are key, though I think there are many students who possess enough maturity to handle these types of books as well.

TJ is really cool. What inspired his character? Is there a real-life TJ?

TJ is pulled straight from a cousin of mine. He spent years hiding his true self and when he finally revealed his identity, it was such a weight off for both of us… because I had a feeling all along. I left the door open for him to tell me, but it took time. My cousin is much happier living his truth and loving freely. He is as creative, talented, and endearing as the real TJ in LIKE VANESSA.

The responses to the book from young black girls is heartwarming. Who was your first reader for Like Vanessa?

This is a toughie. I actually shared Like Vanessa with a few people simultaneously. Mainly my mom, best friend Stephanie, and husband Nasser. I also had the good fortune of receiving feedback from my critique group and certain family & friends. I’ve thanked all of them in my acknowledgements section of the novel. It really did take a whole village for this book to come together!

How important do you think #ownvoices books are for readers, especially by women of color?

The lack of diversity and inclusion in publishing is still a sore spot. Some progress has been made, but we still have a loooong way to go. While there are more books being published featuring black, Latinx, Asian & Native characters, only about 6% of “us” are actually writing these stories. So I’d say #ownvoices is a pretty important movement. We need more stories written about us, for us, but by us.

As adult women of color, how can we better support this generation of girls to follow their dreams, and keep them safe, despite the system and societal prejudice?

Representation matters. By consistently exposing girls to other women who have paved paths for them to follow, this is how we set the foundation and give girls permission to follow their dreams.

As for safety, this generation of girls should be made aware of people, places, and organizations that they can turn to when pressures become too great. The teacher in me says to start there, with a teacher, in the classroom. Teaching is so much more than textbooks. Teachers act as counselors, parents, nurses, and much more.

Beautiful and painful all wrapped in one! Ha! Some days I would love where Like Vanessa was going, but then there were times during the revisions where I would wipe out whole chapters because it all felt like a garbage fire. That’s where the pain came in. Because Like Vanessa takes place in 1983–’84, I had to do quite a bit of research (even though I’m an ’80s girl!). The slang, the clothes, the music all had to be done right. I had fun reliving some of my favorite childhood memories.

If you could give this book to your child self, what would you like to say to her before she reads it?

I would say to myself: You are powerful and beautiful and significant even if people say otherwise.

Can you tell us about upcoming future projects?

Yes, I’d love to! I’m currently revising a YA novel, which will be a companion to Like Vanessa. The story will focus on the bully, Beatriz Mendez, from book #1. Beatriz wasn’t born mean. Once upon a time, she had a dream. We’ll see it reignited in book #2.

I also have a middle grade novel, DEFINITELY DAPHNE, publishing in October with Capstone. In front of her followers, Daphne is a hilarious, on-the-rise YouTube star. But at school, “Daphne” is really Annabelle Louis, seventh-grade super geek and perennial new kid. When her vlog goes viral, Daphne has to figure out if living a double life is worth it.

Like Vanessa by Tami Charles is out on March 13. Be sure to buy a copy!