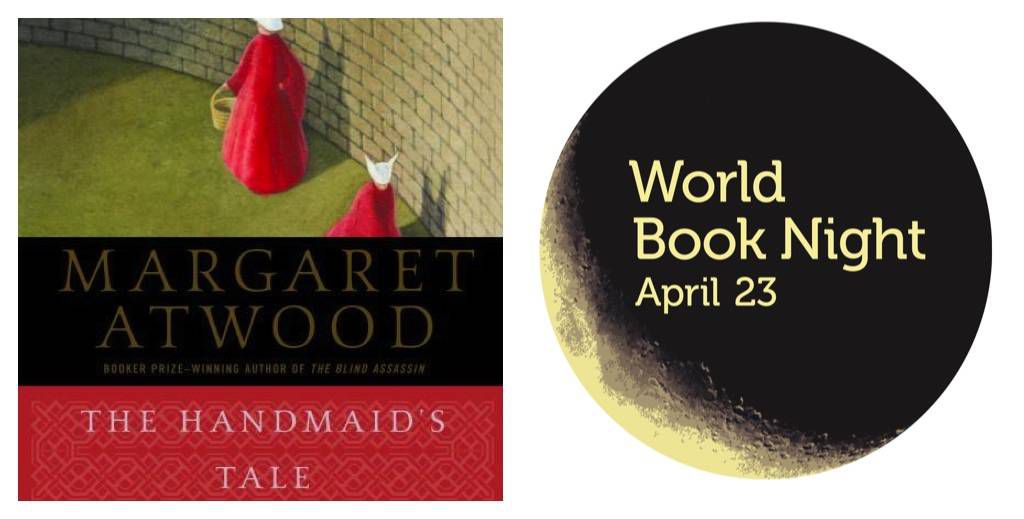 “Would you like a free book? It’s World Book Night and I’m giving them out!”
“What kind of book is it?”
“It’s kind of a sci-fi novel, it takes place in the future.”
“Oh, like with spaceships and aliens?”
“No, no aliens.”

It was 9:30 in the morning on April 23, and I was talking to my favorite bank teller. I had maybe been a little ambitious; I hadn’t had my coffee yet, and I was running errands before the bookstore was open. But I was determined to start World Book Night as soon as possible, regardless of whether it was actually night or not. The book in question? Margaret Atwood’s The Handmaid’s Tale.

In 2012, I had picked Octavia Butler’s Kindred for my give-away book, and hadn’t thought much about my pitch aside from wishing that “Have you accepted Octavia Butler as your personal savior?” was actually acceptable. For 2013, I thought long and hard about what I would say to people. This book was one of the first dystopias I ever read, and it taught me that science fiction could be also be about important political issues. That was it, the elevator pitch. It felt both profound and relevant — after all, in April the GOP’s war on women and Planned Parenthood was rolling on, and The Handmaid’s Tale felt like a pretty apt choice.

But the best-laid plans… More often than not, the conversation went like that first one. The goal of World Book Night is to give books to strangers, preferably ones who aren’t already committed readers. Which means you don’t know them, you don’t know their politics, and you don’t know how long they’ll actually let you talk to them about the book you’re trying to put into their hands. With some people, “Would you like a free book?” is as far as you get. If you’re lucky, some will ask you, “What is it about?” and give you more than a second to answer.

And I found myself a bit stumped. What is The Handmaid’s Tale about? Can you sum it up in a sentence? For example, according to Wikipedia, it “explores themes of women in subjugation and the various means by which they gain agency.” I defy you to be able to pull that out of your brain while at the bank, and also not to sound like an academic jerkface while you say it.

It’s about women and reproduction. Queue shifty eyes.
It’s set in the future, and all the women are under male control. “Huh.”
It’s about this woman who lives in a religiously-controlled society, and she discovers a resistance movement, and— “Cool!”

As the day (and then night) went on, I got better at summing up what is, for me, an un-sum-uppable novel. I gave away all my copies, on the street and at coffee shops and thrift stores and parks and one hair salon. Because the genius of Margaret Atwood’s books is that they are about so much more than their plots. They are about agency, and reproduction, and politics, and religion, and resistance movements. But ultimately, they are about who we are, and who we could be, and how maybe we should think very carefully about both those things.

Spoiler alert: They are not about aliens.