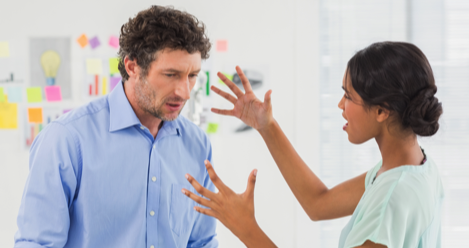 How many times have you been hit by the mansplaining epidemic while talking about comics? Close male friends, a partner, and especially strangers on the internet—talking to men about comics is always fraught with uncertainty. When will they be offended? When will they smirk smugly at your opinion? When will they casually dismiss and talk over you? We at the Riot have put together a survival kit for the dreaded conversation; whether it’s voluntary, or uninitiated on your part. Talk to men about comics, but at your own risk.

#1 You’ve read/watched their favourite comic, after they insisted that it is the best:
Approach with caution. Do not talk to them about how you felt about the treatment of women in the comic. How dare you bring up feminism in the midst of something so pure?! Gross.

#2 You want to talk about the overarching problem of toxic masculinity in comics:


Just don’t. Do you not realize that not all masculinity is toxic, and also, not all men!? You’re clearly being hysterical about a non-issue. That one comic did equality of the genders right that one time, btw. Do you know of that very specific instance?
Oh, you aren’t aware of that instance? There you go, you’re not a real comics person.

#3 You’ve tweeted something comics-related, and it wasn’t even a complaint, but now someone is mansplaining Batman to you.
Priya says,
You take a deep breath and block them. Then you write an article explaining your point of view and post it on a website where they cannot respond and they cannot mansplain further. And you also make it a point to mention that everyone has the right to their opinion.
Shiri says,
Prepare to die on that hill. No matter how small the point, no matter how correct you are regarding a given fact, no matter how much evidence you provide, from actual comic panels to scholarly commentary, you will still, somehow, be wrong. If your Tweet happens to have been opinion-based, your opinion will be wrong even if you are an experienced comics reader/commentator/writer. If you insist on standing your ground, you will repeatedly be charged with double barreled “well, actuallys” and rapid fire “buts.” Prepare to plant yourself like a tree, sisters, and know you will be sick of your own voice by the time you have uttered your final, “No, you move.”

#4 You’re excited about a female-centric comic book/movie, and have made the mistake of shrieking about it to a man:

The Stack Newsletter
Sign up to The Stack to receive Book Riot Comic's best posts, picked for you.
Thank you for signing up! Keep an eye on your inbox.
By signing up you agree to our terms of use
Try patting them gently, murmuring Christopher Nolan’s name all the while. Slowly, but surely, play Batman vs Superman for them, and walk away. Text your girlfriends about it instead.

#5 You’ve undertaken the giant task of discussing gratuitous violence in comics:
Have the receipts ready. Lots of receipts. Smother them with links till they don’t know which way is up.

#6 Oops! You mentioned that you like comics to a dude you just met and now you can see the light kindling in his eyes. Are you his Dream Girl?:


Jess says,
Immediately start talking about how you disliked The Dark Knight because of its poor treatment of women. There, now he thinks you’re a fake geek girl—but at least you don’t have to fend off clumsy attempts to loan you his favorite Grant Morrison books so that he can explain them to you.

#8 “Well, actually, it’s like that in the comic.”
You’d like to talk about the failings of an adaptation to give space to women, but @Comicsdudebro456 is very offended by such an insinuation and insists that the all-male cast stays true to the comic, and is therefore, the Real Truth.
Remind them that this is all fiction. These are stories someone imagined and put to paper. This is not real life. If *one* woman gets a talking part in their precious comic adaptation, the world will not fall apart. Their status as the superior sex is not under threat, and will not come crashing down. They will still remain the rulers of the comics world, and it’s all going to be okay.
Also, adds Jess, there’s like a 50% chance they’re wrong about the comic.

So there we have it, a surefire guide to read before you deign to talk to men about comics. I’m setting up a betting pool for the number of men who will reply to this post with #NotAllMen and/or mansplain mansplaining to me. To participate, please comment with your guess.