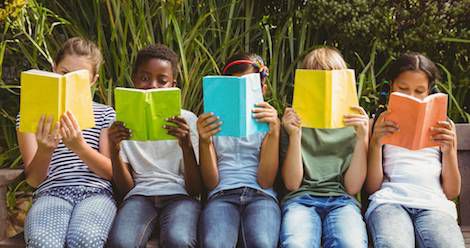 Award-winning Syrian author and illustrator Nadine Kaadan arrived in the UK in 2011. Still not thirty, Kaadan is author of more than a dozen children’s books. Her work has long foregrounded the vulnerable, including children with disabilities and those experiencing war.

For the last several years, Kaadan has worked with refugee children in the camps and in the UK. She has also worked to connect British children with Syrian children and their stories.

Now, with “Babel Babies” co-founder and translator Ruth Ahmedzai Kemp, Kaadan is putting together a weekend of “stories and songs” for Syrian refugee children. Kaadan and Kemp are organizing two days of music, stories, and crafts for kids, set to be held in Cheltenham & Gloucester February 4 and 5.

You can help support the project and also get yourself a copy of Kaadan’s first English-language children’s book, the charming The Jasmine Sneeze. Or, if you read Arabic, get a copy of Kaadan’s moving and beautifully illustrated Ghadan, about a child’s life during war.

Kaadan is keenly interested in including diverse children’s stories in the classroom, something she also discusses over at Picture Book Den. Her advice to UK teachers and librarians is also relevant to the US, Canada, and Australia:

Because there is a lack of Syrian children’s books that are translated into English, I would start by sharing some books about Syrian art and architecture with the students. This can quickly reveal a lot about life and culture in Syria without overly highlighting and marking ‘difference’. It would also be insightful to look at various examples of Syrian illustrations and discussing them in class- this would help the integration of new and diverse cultures in the classroom.

Kaadan also had advice for those who want to design a more diverse library or curriculum. The italics are hers:

I would recommend that the story chosen from a foreign culture not only be about trademark cultural habits, heritage and customs, as is often the case. In addition to valuable stories about the above topics, I think children should also be encouraged to read books where foreign culture and tradition is sometimes a secondary trait, so that the primary trait is a focus on the strength of the story itself. I believe that a story should be translated because it’s a good story, regardless of whether it’s mainstream or culture-focused.

For more about the Stories and Songs for Syrians project, visit Fundsurfer.