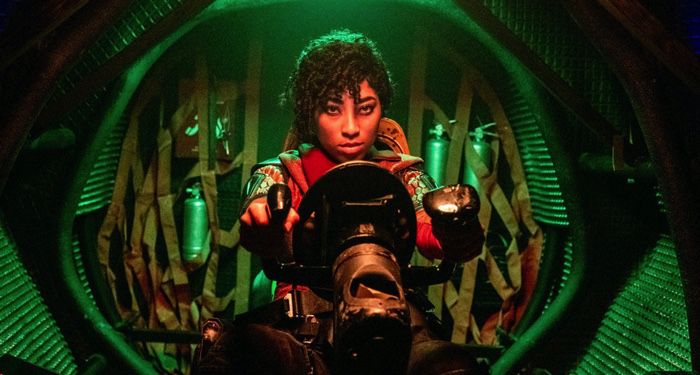 I’ve tended to shy away from getting emotionally involved in Syfy shows the last bunch of years for several reasons: first, a good half of them were…shows I could live just fine without. Those I enjoyed either went on too long and declined in quality or ended up cut off too soon, depriving myself, and other fans, of the payoff we both needed and deserved.

As I discovered at Emerald City Comic Con 2019, however, Vault Comics is putting out some excellent books by some really fantastic authors, Vagrant Queen among them.  So I decided to take the risk of having my heart broken yet again by seeing how the network did with their adaptation of said comic.

Vagrant Queen by Magdalene Visaggio, Jason Smith, Harry Saxon, and Zakk Saam follows Eldaya (alias: Elida) al-Feyr, deposed monarch of Arriopa, as she attempts to survive while on the run from both the Republican forces who murdered her mother and the Loyalists who want to put her back on the throne. She earns her living as a scavenger with no scruples about killing and stealing, and her only “friend” is a man named Isaac from whom she stole a ship after she “made him shoot her,” for which he still hasn’t properly apologized. Isaac is one hundred percent willing to sell Elida out, though he might warn her before things get too dire. Like, two thirds of the time. Well, maybe half.

One day, however, Isaac makes Elida an offer she can’t refuse: if she gives him back his ship he’ll tell Elida where her mother, whose death has apparently been greatly exaggerated, is being held prisoner and help the former Queen find her. Elida makes the deal, even knowing the dangers, because she will do anything, even sit the throne again, if it means rescuing the woman who guided her, loved her, and kept her safe. 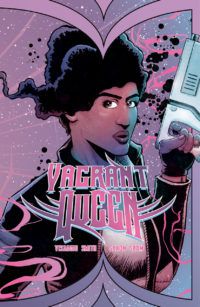 While the show’s writers have definitely adapted the main plot points and character personalities from the comic, the small screen adaptation falls more into the “spiritual” than literal translation categories. Part of that is due to the fact it’s easier to follow non-sequential panels in a comic than it is non-sequential scenes in a television program, making for less frequent but longer flashbacks in the show. This shifts the narrative from the more even past/present balance in the book to a heavily present tense weighted story, an emphasis which lends the Vagrant Queen adaptation an urgency that changes the feel, though not the essence, of Elida’s adventures.

The Vagrant Queen comic also has a generally whacky aesthetic that extends to the dialogue, giving even serious beats a sense of delightful absurdity that live action, even with special effects and makeup, simply can’t replicate. It can, however, reinterpret. In this particular case, square jaws and villainous mustaches become neon lit space stations, singers with tasseled mushroom heads backlit by an ’80s acid trip neon, and synthesizer driven musical tracks. While a contrast in “these are completely different visuals that somehow manage to convey the same sensibility, the same cheeky ‘damn this is the best job in the world and it’s ours’ joy,” they also complement each other beautifully.

The writers and showrunners have also managed to keep both the characters’ snark and their likability intact, which isn’t an easy task, nor always desirable in narrative. In this case, we need a reason for our crew to come together and stay together, even though it’s clear they’re going to be stabbing one another in the back constantly which, in turn, means we’re going to have to enjoy them independently of one another (as we do in the comic). We’re also going to have to enjoy their group dynamic without the cycle of betrayal and forgiveness getting stale, which brings us back to liking them as individuals etc. etc. Adding a third character into the mix earlier on in the show was a wise move, as in the comic it’s only Elida and Isaac and by the end of issue six I was already hoping for some fresh blood. Figuratively. There had already been plenty of literal viscera.

An adaptation that relied more on the spirit of the Vagrant Queen comic than a direct translation was definitely the way to go for a book with this much personality and I’m here to give it a hard Pass. Trying to make an exact copy would land you with something much more like Bizzaro than OG Superman, a clone with too many mutations to look or act the way you hoped it would. I’d highly suggest picking up the book, which is loads of fun, and if you’re looking for something to fill the time between seasons of The Expanse or fill the Killjoys shaped hole in your soul, Elida is your girl.