This Riot Recommendation of suspenseful page-turners for summer reading is sponsored by Everything That Follows by Meg Little Reilly. 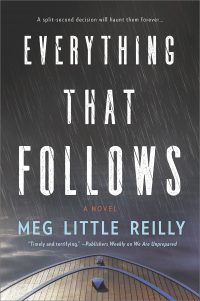 Three friends take their partying from bar to boat on a misty fall evening. Just as the weather deteriorates, one of them suddenly goes overboard. Is it an accident? The result of an unwanted advance? For fans of Megan Abbott and Chris Bohjalian comes a novel of moral complexity about friends who must choose between self-preservation and doing the right thing in the wake of a fatal boating accident. Set in the moody off-season of Martha’s Vineyard, Everything That Follows is a plunge into the dark waters of secrets and flexible morals. The truth becomes whatever we say it is…

I have to believe that summer is coming. There is no empirical evidence to support that belief as I get bundled up this mid-April morning, but I’m doing everything I can to keep hope alive. One day soon, I’ll be sitting by the pool, silently cursing the kids who are running on the deck and splashing water on my hardcover. What suspenseful page-turner will be in my hands? You offered your suggestions, and here are just some of them:

A Stranger in the House by Shari LePena

Among the Ruins by Ausma Zehanat Khan

A Quiet Place by Seicho Matsumoto

The Vanishing Season by Joanna Schaffhausen

If You Knew Her by Emily Elgar

After Anna by Alex Lake

The Kingdom by Fuminori Nakamura

The Language of Secrets by Ausma Zehanet Khan

All Things Cease to Appear by Elizabeth Brundage

Evelyn, After by Victoria Helen Stone

The Trophy Child by Paula Daly