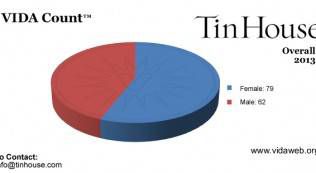 I look forward to The VIDA Count every year, which basically boils down to a series of pie charts that show how many men (in red) were represented in the most influential literary journals each year vs. women (in blue). I don’t look forward to it like I look forward to Christmas, because on Christmas I get to hang out with my family and open presents, and on VIDA Count Day I get to see how prejudiced and backwards and resistant to change so many literary journals are. Still there are some awesome pie charts in this year’s round-up. And there are some pie charts that should be so ashamed of themselves. Let’s take a look at some of the best and the worst of the bunch and distribute the praise and blame accordingly.

Confetti and marching bands and two dozen parade floats for Tin House. 79 women represented vs 62 men in 2013. I think sometimes people look at these stats hoping for a fifty-fifty split, but I want to see tons of magazines that skew distinctly in favor of female contributors and subjects. In three out of the four categories considered (book reviewers, bylines, and overall) women took the lead, and the male to female ratio was 12:8 when it came to authors reviewed.

The Paris Review’s numbers, according to VIDA, had previously been “among the worst in our count,” but this year it looks like those Bad News Bears turned their game around. Fiction and poetry skewed female, essays held even, interviews were male 2:1 and overall numbers skewed female by a single contributor. Most improved is one of the lame awards (everyone in Little League wants MVP, of course they do, being the Most Valuable Anything is rad) but still, an award is better than no award, good job Paris Review.

Is this a joke, NYRB? You’re about a month early for April Fools. Also, you’re not supposed to do April Fools ALL YEAR LONG. Even after I wrote that very disappointed article about you for Book Riot six months ago, you still refuse to change your ways? Reviewers, authors reviewed, bylines, overall, all your pie charts look the same, which is to say they look like shit. You are a disgrace to pie charts, sirs.

This made me genuinely sad. McSweeney’s is supposed to be young and cool, and these numbers are not young and cool, they’re old-white-dudes-yearning-for-a-past-that-sucked-for-everyone-who-wasn’t-white-and-a-dude sad and lame. The Believer’s (another McSweeney’s publication) are better, but they’re not THAT much better. The Believer had an almost equal number of male/female interviewers/interviewees, but blew it hard with book reviewers and authors reviewed. And as a side note, I was incredibly unimpressed with Lucky Peach’s (another McSweeney’s publication) gender issue, for an issue that was supposed to rep women and men equally, that issue short-shrifted women HARD.  Unless these numbers turn around, McSweeneys is going to have to resign itself to being as hip as knee britches and powdered wigs.

Did you guys take a look at this year’s pie charts? What are your thoughts/feelings/whateverings?