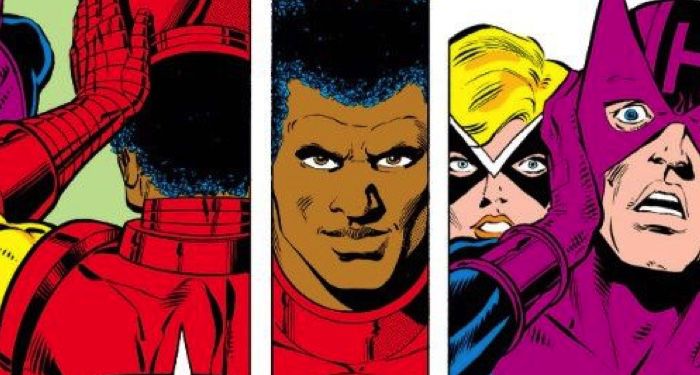 Superheroes, like too many things in life, are very white. For decades, the only people of color you could find in mainstream comics were a) villains, b) horrible stereotypes, or c) both. It took a long time for heroes of color to start showing up. Even then, it was a trickle rather than a flood.

As a result, we ended up with a whole lot of teams with half a dozen white people and one minority (or, if you’re very lucky, two!). As you may imagine, being the team’s token minority isn’t always fun. Fortunately, most superhero teams these days are a bit more diverse, but they all owe a debt of gratitude to the trailblazers of ages past. If you have the stomach for it, let’s take a look back at how these pioneering heroes put up with being their team’s sole source of melanin…or not.

In Avengers #181, the U.S. government declared the Avengers a security risk and sent their douchiest agent, Henry Gyrich, to take over the team. This included control of the roster. Gyrich decreed that the Falcon, the only Black hero available at the time (which is in and of itself a sad statement on the lack of diversity in late ’70s superhero comics), would join the team for the sake of what amounted to an affirmative action quota.

No one was happy about this: not the Avengers, many of whom were being bounced for a guy they’d never met, and not the Falcon, who preferred to work alone and only agreed to join as a favor to his friend, Captain America. Falcon did grow to enjoy being an Avenger somewhat. But not long after Gyrich lost control of the team, Falcon cut out.

In 1976, the Legion of Super-Heroes, a team of 30th century (later 31st century) heroes who debuted in 1958, finally got their first Black member. Unfortunately, he was Tyroc, a segregationist who lived on the magical vanishing island of Marzal. Even back then, people knew that was bull.

But the Legion is so prone to reboots that the odds of Tyroc remaining a shameful footnote in the team’s history were next to nil. Indeed, by the time 2012’s Legion Lost rolled around, Tyroc had left Marzal and was the team leader, not a weird racist fantasy. He also got a decent outfit, which must have been nice.

When the original X-Men disappeared, Professor X gathered a replacement team to rescue them. That team died (!), so he swept them under the rug (!!!) and put together a second replacement team. And what icons they turned out to be: Storm, Nightcrawler, Wolverine, Colossus…uh, Banshee…and Thunderbird? Who the heck is Thunderbird?

Thunderbird, real name John Proudstar, was Native American. You can tell he was Native American because he wrestled bison and wouldn’t shut up about how much white people suck. He spent all of his time being angry and rude until he was exploded in Uncanny X-Men #95, a mere two issues after his debut. Ouch.

On a brighter note, Storm, the only minority left after Thunderbird’s death, fared much better. She even became team leader. This puts her into the next category…

Many people have wished to kick Hal Jordan’s ass, but few are more deserving of the honor than Tom Kalmaku. For years, Tom was the only person who knew Hal was Green Lantern. He would often cover for him, in addition to performing his actual job as Hal’s airplane mechanic. And in return? Hal never called him “Tom,” preferring a racially insensitive nickname that I shall not repeat here.

Eventually, Tom started getting the respect he deserved. He briefly joined the New Guardians and was even offered a power ring of his own. (He declined.) In DC: The New Frontier, a reimagining of DC’s Silver Age, Hal attempted to call Tom by his racist nickname and Tom threatened him with a wrench. It’s pretty sweet.

Like most Marvel heroes, the Avengers are strongly associated with New York City. So it was a pretty big deal when a small group of them set up shop in Los Angeles and creatively called themselves the West Coast Avengers. Among the recruits were Hawkeye, Mockingbird, and Iron Man…uh, kind of.

Unbeknownst to the team, this was not the original Iron Man. Not long before, Tony Stark had fallen off the wagon, leaving him incapable of Iron Manning. His best friend, James Rhodes, took over and never bothered to send the Avengers a memo about the change. When he did tell them the truth, the WCA were surprised at first, but they quickly accepted him as the valuable and courageous teammate he was. And that’s just as it should be.