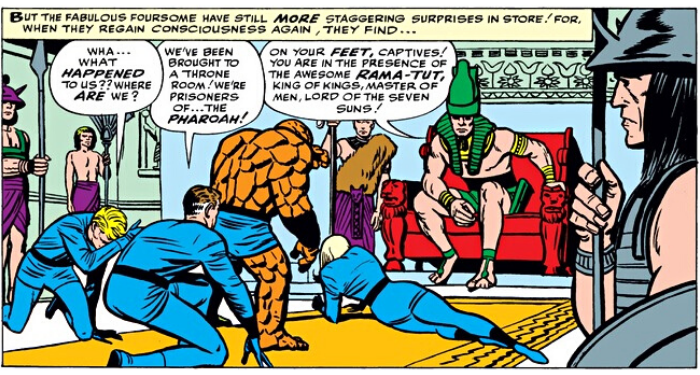 Think pharaohs are a thing of the past? You must not be a superhero.

Westerners have had a fascination with ancient Egypt stretching all the way back to the Victorian era, when it was called “Egyptomania.” This interest received a 20th-century boost when Howard Carter discovered the tomb of Pharaoh Tutankhamen and has been going strong ever since. So it makes perfect sense that mummies, pharaohs, sarcophagi, and other ancient Egyptian paraphernalia show up in superhero comics, especially during the “anything goes” days of the Silver Age.

For this list, I’ll only be including actual pharaohs who were ruling in ancient Egypt. Characters like King Tut or the Living Pharaoh, modern-day scholars who come to believe they are pharaohs, don’t count here. Fortunately, actual pharaohs are common enough in superhero comics that I had no trouble populating this list with real ancient Egyptians with fake Egyptian names — and a yen for conquest.

I’m not sure why those pharaohs so often turn out to have evil intentions in these comics. I am sure of why they all look suspiciously white. I certainly wouldn’t turn to any of these comics as authoritative sources on what ancient Egypt was really like, but that’s far from the point of them. Instead, they were meant to be silly adventures, and they certainly do provide a fun contrast to the usual slew of modern-day supervillains — fun for us, that is. Our heroes often have trouble figuring out how to handle these cloth-bound criminals, though they always find a way. For example, they can…

In real life, Akhenaten was an unconventional pharaoh who managed to briefly overhaul Egypt’s entire religious system. In Marvel Universe: The End, a pretty grim miniseries from 2003, he was kidnapped by aliens, given enough power to take over the world, and then deployed back to Earth to do just that.

All of Earth’s heroes are mowed down in short order. In the end (ha), it’s the villainous Thanos who takes Akhenaten down by stealing a little godhood for himself. In righting the universe, he erases all but the most powerful beings’ memories of the ex-pharaoh’s attempt at world domination.

(And then he rewrote the universe so that all deaths would be permanent. Guess how long that stuck.)

Fighting a pharaoh was an integral part of Blue Beetle’s revamped origin story. As archaeologist Dan Garrett, he stole a blue scarab from the tomb of the evil pharaoh Kha-Ef-Re. An ill-timed nuclear attack (!) from an Egyptian general, Amenhotep (!!), revives Kha-Ef-Re and, uh, makes him grow into a giant. Okay then.

The newly-christened Blue Beetle punches Kha-Ef-Re until he shrinks back down to size and then destroys Amenhotep’s army. And, hopefully, his future adventures were less weird.

In one of Iron Man’s earliest adventures, he encounters a pharaoh who staved off death with a serum that put him in suspended animation for two millennia. And this isn’t just any pharaoh: this fun-loving fellow is named Hatap the Mad Pharaoh, and for good reason.

Hatap uses a magic charm to transport him (and Iron Man) into the past to fight his sworn enemy, Cleopatra. Long story short, Iron Man throws in his lot with Cleopatra (she’s prettier anyway), defeats Hatap, and wins Cleopatra’s heart before returning to his own time.

Run Circles Around Him

In the back-up story in Flash #204, a trip to the local history museum turns into psychological warfare for Kid Flash. The spirit of yet another wicked pharaoh, Rama-Skeet, possesses the body of a recent car crash victim, then hops over into Kid Flash himself.

Just fifteen minutes later, Rama-Skeet has to hop into another body. Kid Flash quickly (how else?) concludes that the pharaoh isn’t strong enough to dominate a living mind for longer than that. So all Kid Flash has to do is keep Rama-Skeet away from people for a quarter of an hour to make him vanish forever.

Fail on Every Level

Fantastic Four #19 is a very convoluted story, so strap in: after discovering the ancient Egyptians might have had a remedy for blindness, the FF travel back in time to retrieve said remedy for the Thing’s blind girlfriend. They are captured by Pharaoh Rama-Tut, a 31st-century time traveler who has the power of mind control (but not the power to get out of ancient Egypt, where he is stranded).

How does the team break the mind control? They don’t: a happy coincidence allows them to save themselves. Then Rama-Tut escapes back to the future (I guess his time machine is fixed now?), and the FF try and fail to bring back the cure for the Thing’s girlfriend. They didn’t even ask Alicia (that’s the girlfriend) if she wanted to be “cured” before running off. Ultra fail.