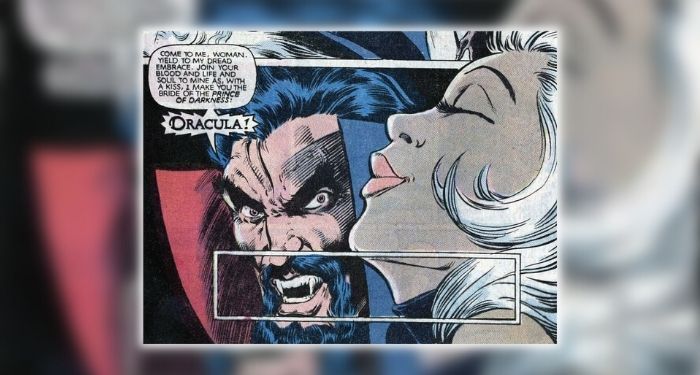 Some comic book superheroes are supposed to be vampires; Blade is probably the most famous example. The heroes on this list, however, do not normally go around sucking blood or flinching away from Italian restaurants.

As Jess Plummer discusses in her history of vampires in comics, our bloodsucking f(r)iends were verboten for quite some time. They and other supernatural creatures, like werewolves and zombies, were deemed too gruesome for children’s wee brains to handle. (Nowadays, our self-appointed moral guardians have decided to “protect” the kids from even scarier things, like human rights and queer people.)

Given this squeamishness, it shouldn’t come as a surprise that the earliest example in this article is from the 1980s. By that point, the Comics Code Authority, which placed the ban on vampires, had lost much of its power, and the undead were free to roam once again. Some of them even roamed into other people’s comics to spread a little immorality to their unwitting, unwilling victims.

Most of these stories aren’t particularly great: trying to jam two popular genres together doesn’t always work out. Still, a sudden attack of vampirism is apparently a problem that superheroes need to be aware of, so let’s take a look at how these encounters typically go down.

In Uncanny X-Men #159, Storm disappears one night and is found in a dark alley with a throat injury. While she seems to make a remarkable recovery, her strange behavior — hiding in dark rooms and reacting badly to her teammate Kitty’s Star of David — alarms the team, as well it should.

Unbeknownst to the X-Men, Storm has been seduced/mind-controlled into becoming Dracula’s lover, which is incredibly creepy and never fully addressed. However, thanks to Kitty’s sisterly love for her, Storm snaps out of it and gives Dracula what-for…sorta. She can’t actually beat him, but Dracula decides he respects her enough to leave her alone and fly off into the night forever.

Get Possessed by Someone Else

In Suicide Squad #55, Nightshade is on the hunt for some stolen Soviet weaponry. While investigating, she runs afoul of Schrek, a vampire-like fellow working for the Soviet government. He turns her so she’ll help his team, the Red Shadows, find the weapons before the Suicide Squad.

Luckily (?) for Nightshade, she had previously become a vessel for the Enchantress, a powerful sorceress. Enchantress’s magic was evidently able to overcome Schrek’s own powers and let her use Nightshade’s body to beat up her captors. However, Enchantress, who never relinquishes control willingly, had to be literally slapped into allowing Nightshade to return for real.

Bet you didn’t know gods could become vampires, did you? After failing to turn Storm, Dracula headed over to Thor #332 and tried to make Lady Sif of Asgard his new queen. Thanks to her godly physiology, the neck bite granted Dracula enhanced powers and completely mind-wiped Sif.

Thor, Sif’s fiancé, is not happy about this turn of events, as you may imagine. While Dracula and Sif take in an opera, he comes storming in to fight for his lady’s hand. It’s not really necessary: Sif, being a goddess, was only temporarily affected by Dracula’s bite. Drac soon loses his extra powers, Sif returns to normal, and Dracula heads out to fight Doctor Strange instead.

Heroes becoming vampires is the entire point of DC vs. Vampires, a miniseries in which the World’s Finest are pitted against the entire vampire race after the murder of the vampires’ peacekeeping queen. The vampires’ first victims are the Legion of Doom.

Green Lantern Hal Jordan is the first of the Justice Leaguers to be converted, and he wastes zero time in going after anyone who could possibly threaten the vampires’ plans. He doesn’t drink blood, though — oh, no, he just murders his teammates in various gruesome ways. There is a giant blender involved. Yeesh. Next!

Go About Your Business

Early in his tenure as Captain America, Sam Wilson encountered Baron Blood, a Nazi vampire who was part of a plan to sterilize the entire world (except his own associates). Prior to their big fight, Baron Blood grabs Cap’s pet/sidekick Redwing and chows down.

At first, it seems like Redwing is dead. But in All-New Captain America #6, he returns, apparently fine but for a change in eye color that implies he is now a vampire. How would a bird suck your blood, anyway? In any case, Redwing shows no signs of turning evil, so I guess vampirism works differently for our avian friends. Either that, or everyone else on this list is a wimp compared to Redwing’s powers of self-control.