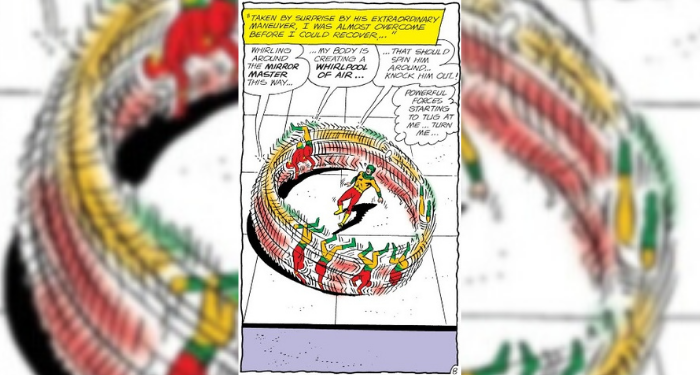 Superheroes have something of a permanent identity crisis. They juggle at least two (and occasionally more) distinct personalities, one of which requires them to risk their life on a regular basis, and the other in which they have to lie to their loved ones about where that bruise really came from or why they had to cancel a date at that new clown-themed restaurant for the third time in a month. Keeping everything in the correct boxes at all times can be stressful — and deadly, if they mess up.

In other words, the last thing a superhero needs is some joker with a magical doohickey that transplants one person’s brain into another person’s body. But here we are.

Most of the time, a hero will get swapped into the body of a supervillain who wants the hero’s body for nefarious purposes. It’s a “wolf in sheep’s clothing” situation, except the sheep has laser vision and the pass code to the Avengers’ locker room. Rarely, a hero will end up in the body of another hero, sometimes by accident and sometimes by design. These aren’t necessarily more fun than being swapped with a villain, but it’s usually less immediately dangerous.

So what’s a brain-swapped superhero to do? Hopefully, this mini-list will give you some idea!

Kick Your Own Butt

1960s Flash comics were so weird they couldn’t even do a body swap story normally. In Flash #146, Mirror Master invents a mirror that allows him to swap legs with the Flash. That’s right, just the legs. That’s all he needs to outrun the Fastest Man Alive, right?

Yes and no. The Flash tries to overcome his impediment by running on his super-speedy hands, but Mirror Master knocks him out and swaps their legs back to cover his tracks. Yet in a convoluted twist, our villain can’t resist hypnotizing the Flash (yes, he can do that, too) and bragging about his victory while Flash is unable to move or remember anything. This gives Flash the opening he needs to defeat Mirror Master before he can swap any more appendages.

In Daredevil #37, Doctor Doom invents a body transferral ray, as one does, and tests it out on himself and Daredevil. The result: Doom, as Daredevil, runs off to defeat the Fantastic Four, while Daredevil, as Doom, is locked in Doom’s dungeon.

After escaping, Daredevil fails to stop Doom the old-fashioned way — that is, with fisticuffs. He then quite cleverly calls up all of Doom’s ministers and orders them to declare war on all of Latveria’s neighbors. The real Doom, who cares more about his nation than about destroying the FF, hastily swaps their bodies back so he can stop the war.

Sometimes, even a superhero needs help out of a sticky situation. This is what happened in Power Girl #10, when the Ultra-Humanite secretly swapped brains with Power Girl’s super-friend Terra. Normally a perky and eager young woman, “Terra” became prone to starting petulant discussions about how supervillains were just misunderstood heroes — and trying to destroy New York.

Meanwhile, the real Terra was trapped in Ultra-Humanite’s badly burned ape body. She was very reasonably freaked out by the whole thing and couldn’t do anything to rescue herself. Instead, she waited for Power Girl to show up and save her.

One of the more spectacular examples of body-swapping in recent years began in Amazing Spider-Man #698, when a terminally ill Doctor Octopus swaps places with a young, healthy Spider-Man. Spidey is not able to reverse the effects before he dies, but with his dying memories and words, he inspires Ock to use his body to become a hero.

Well, sorta. It’s still Ock we’re talking about, and his version of heroism involves creeping on women, talking about how great he is, and nearly murdering an opponent. Luckily, Peter’s ghost sticks around to keep him in check until Ock learned the true meaning of heroism — and sacrificed himself to bring Peter back, ending the reign of the self-described Superior Spider-Man.

Batman #293 was part of a larger storyline in which each of Gotham’s villains tried to take credit for the alleged recent death of Batman. Even Lex Luthor showed up with his own tale, which involved erasing Batman’s mind and then zapping Superman’s consciousness into Batman’s body. This way, Lex could beat Supes to death with his bare hands.

But of course, the story was too good to be true. Batman infiltrated Lex’s gang and figured out his plan in time to alert Superman. They protected themselves from the mind-swap machine and even had Superman dress as Batman during Lex’s “fatal” beatdown. Lex is exposed before his fellow criminals as a greedy, vainglorious chump. I just love a happy ending.