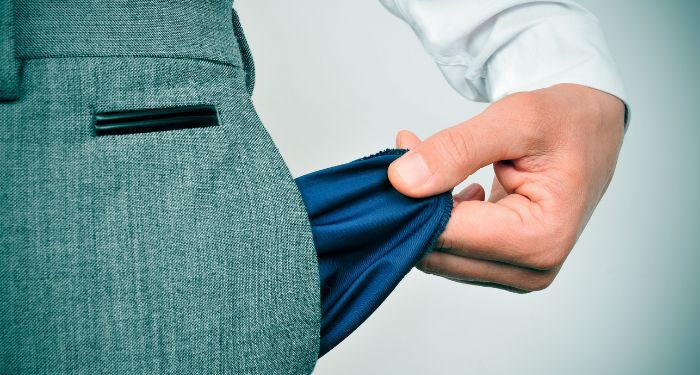 Being a superhero is a lot like living in Monaco or getting away with tax evasion: you don’t see a whole lot of poor people doing it. It takes a considerable amount of money to buy or build all those rocket jets, lavish headquarters, and equipment — and to keep replacing those items when they are crushed by alien invaders or giant robots for the third time in a month. So, with a few notable exceptions (I see you, Spider-Man), superheroes tend to have super-deep pockets.

Relying on giant piles of money to get the job done is a fine way to do business — unless those piles suddenly vanish due to supervillain machinations, bad luck, or even your own poor planning. As readers, we know the status quo will probably be reinstated sooner or later, and all that money will come flowing back in as fast as ever. But for our heroes, the problem is much starker (and Starks seem to be involved a suspicious percentage of the time).

What’s a broke hero to do? Mortgage your secret hideout? Sell your used cowls on eBay? Steal your kid sidekick’s lunch money? All excellent ideas, but before you take any drastic action, let’s look back at some other cash-strapped heroes and see how they went about paying the bills when fortune frowned on them.

Wonder Woman comes from a world of privilege, in some ways: she is a princess who, upon first arriving in Man’s World, is able to live off royalties from her image. But when her PR firm — and her homeland of Themyscira, for good measure — goes kerplooey, she has no choice but to hit the pavement in Wonder Woman #73.

The job market, however, is not a friendly place. The only jobs she can find are at a fast food joint, TacoWhiz, and teaming up with a disreputable private investigator. (Being the noble soul she is, Diana prefers “slingin’ the refrieds” to charging money for her heroic deeds.) So hey, if you’re having trouble finding a job, just remember that you’re in good company with the immortal, superstrong Amazonian princess/diplomat.

Go Off the Deep End

To paraphrase Oscar Wilde, losing one fortune may be regarded as a misfortune, but to lose more than one looks like carelessness. Tony Stark must be the most careless rich guy in comics. And he doesn’t handle it well.

The first time he lost it, when a robot convinced everyone he was the real Tony Stark, Tony went wandering around a rainy street and was taken in by the villain Midas for a while. The second time, he sank deeper into the alcoholism and depression that had cost him literally everything but his life.

Tony always manages to pick himself up, obviously, but there’s a whole lot of moping first.

In Blue & Gold, Booster Gold really wants to join the Justice League. So much so that he embarks on an extremely expensive campaign to impress them enough to let him join up. So how can his best bud, the Blue Beetle, possibly tell him that he has just been fired from his own company for focusing too much on superheroing and no longer has the money to fund this passion project?

He doesn’t. At least not immediately. But when Booster finds out, the problem is almost immediately solved by the reappearance of an old friend and a successful crowdsourcing campaign. If anyone can capitalize on his audience’s love, it’s Booster Gold!

Janet van Dyne first inherited her late father’s fortune in Avengers #43, a fact which she, as anyone would be, was thrilled about. But she got a rude awakening in Avengers #390, when that fortune suddenly evaporated.

So what happened to all the money? Tony Stark, fortune destroyer extraordinaire, happened. Since Iron Man doesn’t normally ruin his friends’ lives on purpose, the winsome Wasp began to suspect that he might have turned traitor. She was right, but, as I’ve discussed before, we try not to remember that.

Before Green Arrow lost his fortune, he was little more than a cheery Batman knockoff with a bow and arrow. It wasn’t until he became a man of the people and grew a neat goatee that he became the obnoxious liberal loudmouth we know and love today.

This happened in Justice League of America #75, when GA was falsely accused of financial improprieties and lost everything as a result. He was stymied at first, but after a tussle with his evil twin and a talk with some poor people, he discovered his true purpose in life: to defend those without the means to defend themselves.