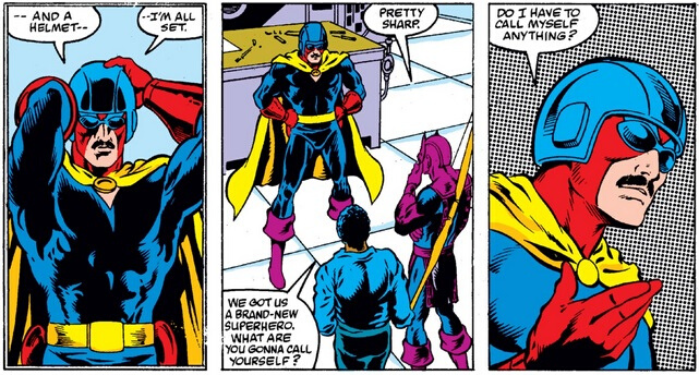 Superheroes are already masters of disguise, so it’s no sweat for them to bust out a new costume and a mysterious new codename when the occasion calls for it. Sometimes, they do this as part of a meticulous plan to throw a particularly persistent villain (or Lois Lane, probably) off their trail, but it’s just as often a spur-of-the-moment decision borne of desperation. Personally, I like to imagine each hero hunkered down in their hideouts in the middle of the night, frantically sewing a new costume before anyone cottons on to what they’re doing.

To clarify, I’m not talking about heroes who change their identity on a long-term or permanent basis, like when a sidekick grows up and eliminates the “kid” or “girl” from their name. This article is just for those times when superheroes adopt a secondary identity for just one story — just long enough to solve an acute problem — and then put it away forever, never to be spoken of again. (And after all that effort they put into sewing the costume!)

As you read through each of the profiles below, see if you can guess who each hero is before everyone else did! We’ll start with an easy one (hint: check out the ‘stache).

Background: With two sets of Iron Man armor running rogue and the real Iron Man nowhere to be found, a new hero arose: an anonymous individual who was able to defeat them both before much harm was done.

Who Is He?: Iron Man…ish

Why, Though?: At this point, Tony Stark was no longer Iron Man and had no secret identity. So when the occasion called for him to do some sneaky investigating, he had to slap an outfit together but fast. This isn’t treated as a mystery in the comic itself: we get to see Tony digging through the Avengers’ lost-and-found bin to put this lovely ensemble together. Hawkeye responds by dubbing him “Spare Parts Man” and “Nothing-in-Particular Man.” Tony is not amused.

Background: Superman has always been the great hero of Metropolis, but when Clark Kent starts having fainting spells, a new hero emerges to handle the emergencies that the mysteriously absent Man of Steel fails to tackle. He gains such renown that he is even selected as the chairman of the newly-formed Club of Heroes. But is Batman right to suspect that Lightning-Man’s debut is connected with Clark’s strange affliction?

Who is He?: Superman

Why, Though?: That troublesome Kryptonite is to blame for this one. A chunk of the stuff got caught in orbit around Earth, causing Clark to develop amnesia whenever it flew over Metropolis. Despite forgetting his Superman identity, he remained determined to save lives, so he made a new costume from a window curtain and went out to fight crime. Well, it’s less silly than wearing his underwear on the outside to do the same job.

Background: After Supes, Bats, and Wondy all vanished, Booster Gold hoped to fill the power vacuum as the world’s greatest hero, only to be upstaged at every turn by the less flashy Supernova. Only Elongated Man, a master detective, seemed to have any idea of who this guy was, although Wonder Girl suspected/hoped it might be the deceased Superboy — and indeed, the costume was based on one Superman himself once wore when he was depowered. Then Booster died, leaving Supernova as the city’s new hero…

Who is He?: Booster Gold

Why, Though?: Booster had to subsume his desire for fame, fake his own death, and pose as a new hero in order to sneak under Skeets’s radar. Skeets, his robot buddy from the future, had been corrupted by Mr. Mind and turned villain. In part thanks to the “Supernova” ruse, Booster was able to save Skeets — but only after seemingly losing him in a scene that will make your tear ducts implode.

Background: Despite Lois Lane’s constant attempts to win Superman’s affections, he finds himself won over by another: Mighty Maid, a super-powered woman from another dimension. Much to Lois’s horror, Supes proposes to this Jill-come-lately and announces his plan to move to her dimension, forever.

Who Is She?: Supergirl. Y’know, Superman’s cousin. Superman’s underage cousin.

Why, Though?: Superman wanted an excuse to make it seem like he was leaving Earth to throw some angry aliens off his track. Apparently, the best and only way he could think to do that was to, uh, make out with his teenage cousin in public? I’m not sure the Earth is worth it.

Background: After discovering the true depths of corruption in the U.S., Captain America could no longer call himself by that name. As Steve Rogers, he moped around for a while until he found himself targeted for harassment by a new villain, the Golden Archer. Goldie seemed to know who Cap was, but Cap had never met him before…or had he?

Who is He?: Hawkeye

Why, Though?: Hawkeye was grateful for all the years of training and patience Cap had showed him, and he didn’t like to see his old pal so down. So he came up with the idea to call himself the Golden Archer, presumably after stopping for a Big Mac, and torment Steve with bad poetry until he rediscovered himself. Steve appreciated his efforts and took his suggestion to come up with a new identity: Nomad, who had a neckline just as indecent as ol’ Goldie’s.