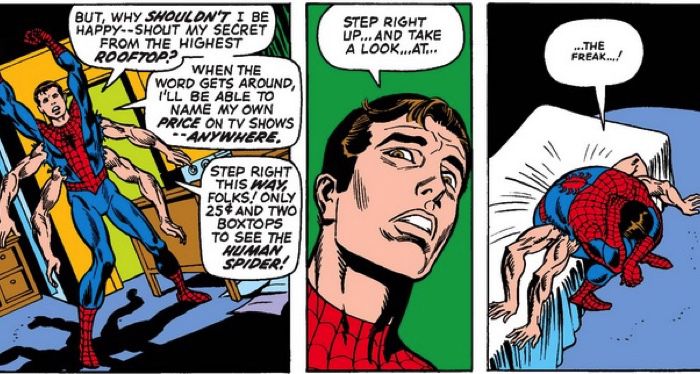 If being a superhero were easy, they wouldn’t be too “super,” would they? Not many people can withstand the physical, emotional, and social strain of protecting a city, world, or galaxy night after night, often with little recognition or even outright hostility from the public. Sometimes, it’s even too much for our heroes. And when that happens, you better make sure your homeowner’s insurance is paid up, because things are about to get ugly around town.

Now I’m not talking about heroes who go on a little break for a while, like the Invisible Woman taking maternity leave or whatever. I’m only looking at heroes who woke up one day with the urge to throw their entire costume out of a ten-story window and go fly-fishing in the Pacific Northwest, and then actually went and tried it. They don’t generally succeed for more than a few pages, but it’s the attitude that counts.

This theme is especially appropriate as this will be my last #SuperheroProblems for a while. I’m not quitting completely, but it will now be a sporadic thing rather than a monthly series. So read slowly and savor every word, true believers, of this already-classic collection of heroes who have just had it.

Given how miserable Marvel’s heroes are about their powers, it’s not surprising that they try to quit on a regular basis. Spider-Man did so in Amazing Spider-Man #100, when he drank a homemade potion designed to eliminate his powers so he could marry Gwen Stacy without the guilt or complication of a secret identity.

Unfortunately for our luckless wall-crawler, the potion ends up giving him four extra arms. It takes him two days (and two issues) to find a cure with the assistance of Curt Connors, a.k.a. the Lizard — and some much more reluctant help from some new guy named Morbius.

Get Involved in Shady Nonsense

In Teen Titans #25, our junior heroes are accused of murdering a Nobel Peace Prize winner for absolutely nonsense reasons. They cope by ditching their costumes and going along with a weird rich guy who insists the government has totally recruited him to train young people for…something.

Why would trained superheroes agree to get more training from some weirdo? Why is the rich guy doing all this? I don’t know! No one knows! But if you want more information on this bizarro chapter in Titans history, here you go.

In Batman #191, Gotham City is stunned to hear that Batman is calling it quits. Not only that, he’s going to auction off everything related to his crime-fighting (except for Robin, who is still upset by this announcement).

So what’s the punchline? Batman was irradiated by a wackadoo scientist who threatened to “intensify” that radiation and kill him if he didn’t quit. (That is exactly how radiation works.) Batman pretends to comply, then dons a protective clay suit to fight the scientist, who conveniently irradiates himself to death.

Go to Another Universe and Also the Future

In Flash #159, Kid Flash is horrified when Barry Allen declares that he doesn’t receive enough accolades as the Flash and so he’s quitting. He does it very dramatically too, leaving a giant note on a tree next to his abandoned costume.

Not knowing what else to do, KF takes Barry to another universe to consult with Dr. Mid-Nite. Mid-Nite determines that Flash was brainwashed by a future cop so that the Flash’s vibration wouldn’t accidentally set off a bomb left in the 20th century by a future crook. Fortunately, time travel is easy for speedsters, and they throw the guy around until he cuts that out. (By “the guy,” I mean the crook, but the cop deserved a few slaps too, to be honest.)

Pass the Torch (and Get Really Drunk)

Tony Stark has quit a few times for various reasons. One particularly disturbing hiatus started in Iron Man #169. By this point, he’d been off the wagon for a while and his life was going straight down the toilet.

When Tony is too drunk to fight a villain attacking his own company, his best bud James Rhodes has no choice but to get into the Iron Man armor. After Tony sobers up, he realizes it would be best for everyone to just let Rhodey keep the armor, which he does for over two years (our time, not comic book time). It takes that long for Tony to pull himself together and be mentally fit enough to be a hero once again.