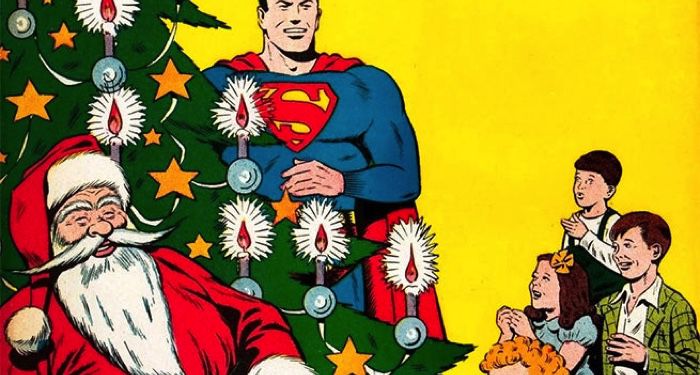 Now is the time of year when all good heroes break out the holly and put a yuletide smackdown on some misanthropic miscreant. Would it really be December if our favorite heroes weren’t out there smacking crooks with Christmas trees or teaching some greedy schmo about the true meaning of the season?

When it comes to Christmas specials, comics fans are really spoiled for choice. Had I chosen to do this list on any other holiday — Hanukkah, for example, or Kwanzaa — I would have had problems. Even heroes who are firmly established as non-Christians often get into the holly jolly spirit, conveniently forgetting their religious beliefs just long enough for the publishing company to make a few holiday bucks off of them.

But the over-representation of Christmas in comics is an article for another day. Today, let’s just enjoy some Christmas comics. They really run the gamut of holiday themes: some are just plain hokey, one is horrifying, and some strike the right balance between cheesy and heartwarming. No matter what type of holiday hijinks lights your tree, it’s probably represented here. So grab your cold-weather beverage of choice and settle in for a long winter’s zap, biff, and pow. (It’s the holidays. I’m allowed to be corny.)

Rip Off a Classic

In Teen Titans #13, the Titans are chilling at headquarters when they get a distress call from a disabled kid named Tiny Tom. But wait, it gets worse! Tom’s father works for a mean old miser named Scrounge, who is letting some unsavory types smuggle stuff into the country via his junkyard.

After remarking on how contrived this all is, the Titans decide to haunt the bejeepers out of Scrounge and make him pay Tom’s dad a fair wage. Scrounge also refurbishes a busted old wheelchair into a shiny new electric model for Tom. Well, it’s better than some versions of Tiny Tim: at least Tom is proactive about getting help, and his disability isn’t something to be cured in the end.

On Christmas Eve in Daredevil #253, our hero encounters a boy called Eightball. (We never learn his real name, but I’ll bet you money it’s Tim.) Eightball is a cynical piece of work, so enamored of the fearlessness of a couple of thugs that he decides to go out and steal himself some Christmas presents.

Daredevil catches the kid in the act and teaches him about how “you get what you give.” Eightball reforms almost instantly, gifting his beloved skateboard to a little girl he’d been bullying earlier. And then Daredevil, as his alter ego, gifts Eightball a new skateboard, just to hammer home the point about reaping what you sow. So instead of a disabled kid teaching an adult about the Christmas spirit, we get a disabled adult teaching a kid.

Save Christmas! Or at Least a Small Child

What better villain to confront over the holidays than Toyman? In DC Comics Presents #67, Superman learns that his whimsical foe has rigged up toys to hypnotize children into committing crimes. He rushes into action, but when one of those hypnotized children — named Tim, of course — lays him low over the Arctic Circle, who can possibly save the Man of Steel?

Santa Claus, of course! Jolly Old Saint Nick flies to the rescue, helping Supes take down Toyman, save Christmas, and deliver little Tim to safety…maybe. In the spirit of the season, we get one of those it-was-a-dream-or-was-it endings, first implying that Superman dreamed the whole team-up and then hinting that maybe it really happened after all.

When the Fantastic Four (including the Jewish Thing, whose religion is not even hinted at here) want to spend the holidays in a quiet spot, they go to visit Reed’s cousin Hamish. Hamish is a priest in a creepy Scottish village where everything is perfectly perfect. Mostly because a squid-shark thing just off the coast eats a child every 25 years in exchange for keeping the villagers immortal.

When the monster tries to eat Reed and Sue’s daughter, Sue drops a church on it, in a nice bit of Christmas symbolism. Turns out Hamish only invited them so the monster would eat Reed’s kid instead of his own. With relatives like that, who needs supervillains?

It’s rare, but it does happen: a hero manages to get enough time off to have a more traditional holiday. In a story from DCU Holiday Special #1, Nightwing tries to find Robin to give him a Christmas present. He finds the Boy Wonder at a movie theater, watching It’s a Wonderful Life.

But Robin isn’t the only movie lover here. Captain Boomerang also snuck into the theater. Both Robin and Boomerang’s dead dads apparently loved the movie, and both wanted to celebrate and reminisce by seeing the film.

Aside from the fact that both these jerks could just as easily have gone to the movies in civilian clothes and actually paid for their tickets, it’s a nice story. It’s made all the nicer by the fact that Boomerang’s dad killed Robin’s (and vice versa, in self-defense), so this bonding moment is the ultimate in Christmas spirit.