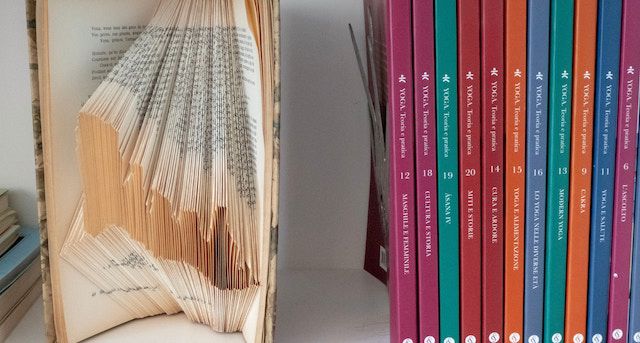 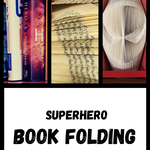 You’ve seen book folding, but have you seen superhero book folding? If not, you’re in for a treat! There are a whole bunch of book folding patterns out there that show you how to fold your old book into a representation of your favorite superhero’s logo. This is crafty geek points to the max, my friends. Take a look at what we found on Etsy.

This is the Avengers logo rendered in book pages! If you look at the artist’s promo photos, you can see that they’ve constructed Green Lantern and Deadpool folds too. Alas, these do not appear to be available on Etsy.

Fold yourself a Batman logo and place it high in your room. Light it with a spotlight. Your home is Gotham now and Batman watches over your book crafts. And your collection of Batman comics. Meta!

What’s better than Batman except more Batman? If the Bat logo isn’t enough, then fold Bruce himself with this pattern. Look how intimidating, and yet also how crafty! Can’t you just imagine Alfred meticulously folding a copy of Bruce’s favorite book, How To Win Friends And Influence People, while Batman zooms through the city, listening to an audiobook on patrol?

I love this logo. From the moment I laid eyes on it, I became obsessed with the idea that these two lovebirds would somehow find a way to create life together. That child would embody the best of human and Kryptonian attributes. He’d use his powers to make really awesome YouTube videos of dead malls. He’d get caught with weed but he’d be totally chill about it on Ellen. This logo is the perfect way to delve into the world of superhero book folding.

Maybe you’re a real live comic book fan. Maybe you’re one of the five people who liked the Netflix show. Either way, you’re in luck! There’s a book folding pattern so you can sacrifice an OK but not noteworthy novel to the tepid glory of the Immortal Iron Fist.

He! Is! Paper! Man! This is how the big kids blast their crafts to Instagram noteworthiness. Tony Stark probably never read a book in his life. He probably learned everything he knows from YouTube tutorials and practical labs. Yet here, ironically, is his greatest legacy: a print book folded by hand. It brings a tear to the eye.

This isn’t a gift. It’s a warning. Fold this Punisher logo from a critically acclaimed thriller and leave it on the doorsteps of those who nefariously and callously profit off of the pain of others. If that doesn’t deter them from their evil ways, ramp up to knitting. Nobody stands long against wool.

He does whatever a book spider can. Spider-Man is a hero we should be able to get behind as bibliophiles. Actual spiders are excellent library companions on account of the fact that they eat the nasties that eat old paper. Whether Peter Parker gets cravings for book lice is anybody’s guess. He probably does. He looks like the type of guy who could take out a book louse or two.

Superman would probably make this himself with a book that he thinks everybody should read, like Tom Sawyer or Little Women. After that he’d get super into book folding, and because he can accomplish a great result at super-speed, would start an Etsy store to supplement his meager journalist income. It would put everything else out of business, so he’d feel bad and stop and just give his creations to all his friends for holidays.

This is how you do justice to the best member of the Justice League! Wonder Woman would probably appreciate her logo folded into a nice trans-inclusive feminist critique of neo-pagan sects. She seems like the kind of person who would appreciate said piece being mailed to her. Maybe she’d set it on her shelf in a place of honor, and say, my, that Anna is terribly talented at superhero book folding and seems weirdly fixated on me. Perhaps I should exist in real life so that she can be my best friend.

A girl can dream.

Not into book folding yet? Let us show you what you’re missing! If you’re ready for even more adventure in the beautiful mutilation of books, enjoy some artsy book art inspiration.