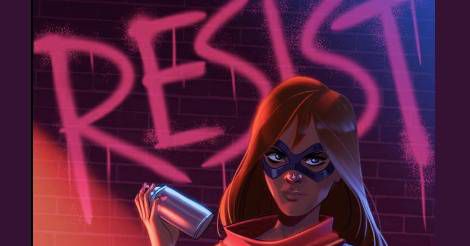 If the pen is mightier than the sword than certainly the paintbrush–physical or digital–is too. Superheroes have always been political so it is no surprise that with Trump taking office and people fighting for their civil rights and lives that artist have taken to using superhero art (along with one villain) to show resistance. In a time when silence is not an option–

–here is some impactful superhero art fitting of the #resistance.

“For as long as the current immigration ban exists, I’ll be donating 100% of proceeds from all sales to the ACLU.” Prints available here.

I'm over the anthropomorphism of the Statue of Liberty as a trope, but I've exactly one indulgent Nazi punching statue painting left in me. pic.twitter.com/jwkar49NcU

(It's a nod to this Wonder Woman panel. Because I am absolutely not over the trope of Nazi punching.) pic.twitter.com/yinFCIhS3p

Wow! The orders are pouring in for @davidmackkabuki art print to fight #MuslimBan keep it up https://t.co/0ujz8OPAoK pic.twitter.com/pJaZVuTmXX

.@DCComics Our heroes defend the oppressed against the powerful, dismantle the #muslimban. pic.twitter.com/TdBwuy4prB

Anonymous (As far as I could find the original image seems to have been added anonymously to imgur.)