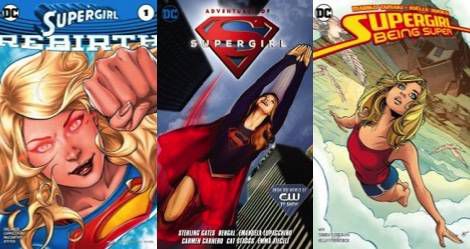 Way back in 2015, when Supergirl, a.k.a. A Beautiful Gift Made Especially For Me, A Supergirl Fan, was gearing up for its premiere, I wrote a character primer to get readers up to speed on probably the best superhero ever, definitely the best one on TV (take that, Oliver). I also took DC to task for their failure to actually publish a Supergirl comic to coincide with the show’s debut.

Well, I’m happy to say that these days, a season and a half into the show’s run (and renewed for a third!), readers have not one but three current or very, very recent comics to choose from – and not only that, they’re all great. Check ‘em out: 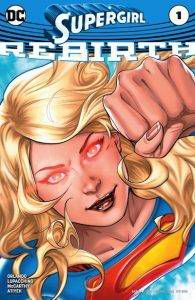 Supergirl was one of the last books to be launched from the Rebirth line, but it definitely turned out to be worth the wait. Orlando’s done a great job synthesizing elements of the TV show (Kara’s adoption by DEO agents Jeremiah and Eliza Danvers) with the continuity of her New 52 series (for example, her father Zor-El’s transformation into the Cyborg Superman), while not making either one a prerequisite for following along. It also delivers something I regretted not getting to see in either the show or the previous comic series: Kara’s first attempts at assimilating to life on Earth. With sketchy, energetic art from Brian Ching, Supergirl is a fun and accessible book with a smart, engaging heroine. 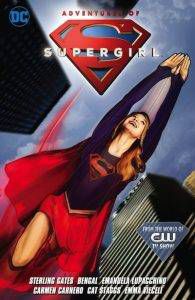 Sterling Gates knows from Supergirl – he wrote her for years before the New 52 – and from TV tie-in comics. I was stoked when DC tapped him for Supergirl’s TV tie-in comic, and more so when the artists were announced: look how many women are on that team! Unfortunately Adventures of Supergirl is a digital-first miniseries and not an ongoing like her brother shows Arrow and Flash have, but that just means you can pick up the trade that collects the whole story – an exploration of Kara and Alex’s relationship and multiversal Supergirls that does things even the show’s impressive effects team couldn’t manage onscreen – and read it fast before bugging DC to publish more. 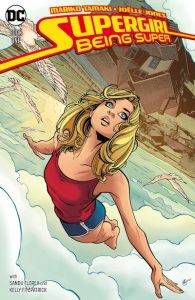 There’s only been one issue so far of this highly-anticipated miniseries, but so far it’s lived up to the hype. This is an indie take on Supergirl from the writer of the acclaimed That One Summer, a moody out-of-continuity story that explores identity and growing up, and feels authentically YA in a way Supergirl stories often fail to do. I named it the best comic I read in December and I can’t wait to see where this series goes. (Sidebar: Tamaki is only the third woman to write this comic, which is an appalling stat considering Kara’s 57-year history, but having a female writer on board really adds to the richness and authenticity of Kara’s voice.)

Got a little Supergirl fan looking for something to read? Kara is featured prominently in the DC Super Hero Girls collection. Pick up the graphic novel Finals Crisis or check out the ongoing digital-first comic. Young readers might also like the prose novel Supergirl at Super Hero High by Lisa Yee, which isn’t quite a graded reader but skews a little younger than middle grade.

If your tastes skew more vintage, pick up Supergirl:The Silver Age Omnibus, a gorgeous-looking collection of Kara’s earliest appearances with a stunning Darwyn Cooke cover. (P.S. My birthday’s in April, if you happen to buy an extra copy!)

And finally, for some more interactive fun, the Supergirl adult coloring book features covers and spreads from some of the best artists to work on Supergirl, including Curt Swan, Carmine Infantino, Leonard Kirk, Jamal Igle, Amanda Conner, Amy Reeder, and Emanuela Lupacchino. No exaggeration: this was my favorite Christmas present this year.

Have you been reading (or coloring) any of the books above? What did you think?