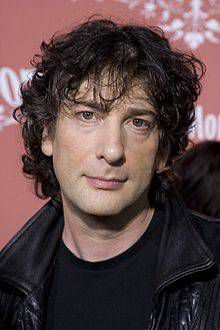 Neil Gaiman is, perhaps, one of the most ridiculously busy authors working today. He writes children’s books, tv episodes and adaptations, radio plays, movies, short stories and comic books; he’s active on Twitter and on his blog; he records audio books; and, at long last, he has written another novel for adults.

The Ocean at the End of the Lane is a slim little novel about an unnamed Englishman reflecting back on his bookish seven-year-old self and his neighbors at the end of the lane in Sussex. Not surprisingly, Gaiman has done a tremendous number of interviews about the book, including one webchat where he directly answered reader questions. Here are some of the highlights:

Joe Hill: These aren’t the first women to wander through your stories, deforming reality as they go. Would the story have been different if it was a house of three guys? Could that even have worked?

Neil Gaiman: It would have worked, yes, although it would have been a very different sort of book. The farm men I knew as a boy were a taciturn lot, and they weren’t much for talking. I like that the Hempstock women are chatty, and welcoming. … I went for the women partly because I liked the idea of grandmotherly energy, and because the original inspiration for the Hempstock family, when I was about 8 years old, was having read a story of Henry Kuttner’s called “Pile of Trouble” about the Hogben family, an Appalachian family of mutants–and all the Hogbens were men. (There is a Ma Hogben, but she never says or does much.) I thought about the farm down our lane that was mentioned in the Domesday Book, and wondered what would happen if the people who lived there had been there for the last thousand years. So the Hempstocks had been composting in my head since I was a small boy, waiting for their story to be told. Sometimes other Hempstocks would show up in other books, but they weren’t the real Hempstocks, the ones in the farm at the end of the lane.

If you click through to the rest of the interview (which, fair warning, discusses several characters and points of the book), you’ll also find a recipe for lemon pancakes… just because.

On writing the novel for his wife, Amanda Palmer, while she was away recording an album: “I thought I’d write her a story because I missed her. She doesn’t like fantasy very much, but she really likes honesty, and she really likes me. Writing it was like going, look, this was me. You’re always interested in me. The family isn’t really mine, the things that happened aren’t really mine, but the landscape, the place it happens, is me, and the eyes out of which this kid looks are those of seven-year-old me.”

You can find the rest of the interview here.

From a webchat hosted by The Guardian

Stagethyme: In the sleevenotes of “Where’s Neil when you need him?”, you mentioned how important music was to you when writing (‘part of the writing process-different music for different stories’). What music were you listening to while writing The Ocean At The End Of The Lane and what music are you listening to now?

NeilGaiman: While I was writing The Ocean at the End of the Lane I was listening pretty compulsively to the Magnetic Fields album Love at the Bottom of the Sea.

…which, now I think of it, may have been one of the places the title of the book came from.

Also listening to a lot of Leonard Cohen, and jogging music because I was jogging a lot and building strange playlists of things I had not listened to since I was a teenager.

The rest of the discussion — which takes place in the comments of this post — is a good read if you don’t mind scrolling around a bit.

On being the little boy who lived in books: “When I was 7, my proudest possession would have been my bookshelf ’cause I had alphabetized all of the books on my bookshelf. I’d got to the point where I’d persuaded my parents to let me go to the local library in my summer holidays, and they would actually drop me off with sandwiches at the library, and I would just head into the children’s department at the back and just start reading my way through it. It was the best place in the world.”

Listen to the full story here.

From Jacket Copy at the Los Angeles Times

On his writing day: “[It] tends to be a very specific kind of balancing act between things that move me and things that people are screaming for.”

On the already-planned movie, to be director by Joe Wright: “It was very important to me that it be very English … I wanted an English director and an English production and also that it was made by people I like and trust. I knew the moment this thing went huge studio and huge director, then this little baby of mine that I loved was very likely to become something else, and I didn’t want that to happen. It would break my heart. It’s too close, too personal.”

Read the rest of the story here.