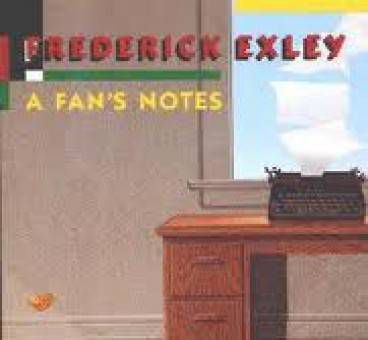 You’ve got your chips and Ro-Tel-and-Velveeta dip prepped. You’ve painted your face blue and red. You’re wearing your best pizza-stained jersey and you and your best buds are already clinking beer bottles in a pre-coin-toss toast to victory. You are ready for the Big Game.

What you probably don’t have on hand, however, is the quintessential novel for Super Bowl XXLVI: Frederick Exley’s A Fan’s Notes. Published in 1968, it’s a “fictional memoir” about a character named Fred Exley who spends 385 pages drinking, vomiting, roaming the halls of a psychiatric ward, undergoing electro-shock therapy, and—for an entire chapter—lying catatonic on his mother’s davenport. Happy stuff, right?  Make no mistake, dark blood runs through the veins of A Fan’s Notes and many readers bail out before they reach misery overload.

But in addition to the alcoholism, self-loathing and psychotic episodes, A Fan’s Notes is—above all else—about football.  Specifically (and with apologies to Patriots fans), it’s about Exley’s beloved Giants whose star player at the time, Frank Gifford, reaches iconic status in these pages. Later, of course, he’d become better known as Kathie Lee Gifford’s philandering sportscaster husband, but for the space of this novel he is a gridiron god humming with talent.

You think you’re a football fanatic? Sorry, but you don’t have anything on Fred Exley, who writes: “as I had come to find myself relying on the Giants as a life-giving, an exalting force, I found myself unable to relax in the company of ‘unbelievers,’ in the company of those who did not take their football earnestly or who thought my team something less than the One God.”

Is it any wonder Exley gets committed to the nuthouse halfway through the novel?

There are long sections devoted to the balletic art of passing, running, intercepting and scoring. These help relieve the tedium of madness that relentlessly weighs down the other pages. Near the end of the novel, Exley writes beautifully of what it’s like to be in the stadium on game day:

The vivid reds and oranges, the plaid and tans, the golds and greens of autumn clothing flicker incessantly across the way where the stadium, rising as sheer as a cliff, is one quivering mass of color out of which there comes continually, like music from a monstrous kaleidoscope, the unending roar of the crowd….I am yet unable to imagine a young man coming for the first time out of those dugouts at that moment just prior to kickoff when the stadium is all but bursting its great steel beams with people. I am incapable of imagining stepping out and craning my head upward at the roaring cliff of color, wondering whether it be all a dream which might at any moment come tumbling down, waking me to life’s hard fact of famelessness. The stadium stays.  The game proceeds. Autumnal mists set in. At half time the stadium’s floodlights are turned on; so that the colors, with each change of light, change, too—become muted, become brighter again, like a leaf going from vivid green to lemon yellow to wine red to rust brown, reminding one that time is passing, that time indeed is running out. It was that kind of day, that kind of an hour, when the Giants, losing 17-10 with two minutes remaining, came hurriedly to the line of scrimmage, eighty yards from a touchdown and a possible tie.

So, if you really want to impress the other partiers at halftime, why not whip out Exley and quote a couple of touchdown-worthy passages? Who knows, maybe your friends will be in such awe of your literary sports prowess they’ll start Tebowing to you.