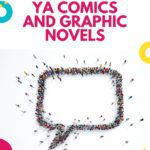 As the days heat up, don’t forget to add graphic novels and comics to your summer reading lists! The next three months are full of excellent new releases, including new books from some of your favorite authors/illustrators, exciting new debuts, and new installments of fan-favorite series. Get ready to dive in! 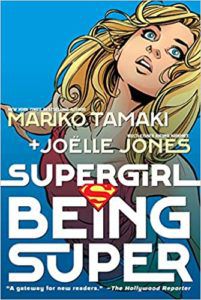 Kara Danvers is Supergirl—she crash landed on Earth as a baby, and now lives with her adopted parents in Midvale. It’s a little hard hiding her powers to pretend she’s a normal 16-year-old, but it only gets more difficult when a horrible earthquake shakes up some long-buried secrets about Kara’s past. 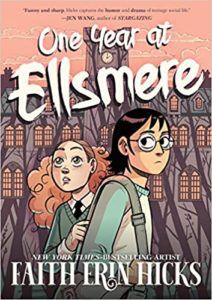 One Year at Ellsmere by Faith Erin Hicks

In this boarding school adventure, Juniper wins a scholarship to the prestigious Ellsmere Academy, and she couldn’t be more happy for a studious, scholastic utopia. But things don’t turn out the way she planned, with a mean girl who sets her sights on Juniper, her academic performance not quite up to snuff, and rumors of a mythic beast roaming the grounds. This is right on the cusp of MG/YA, but I’m sure YA readers will enjoy it as well! 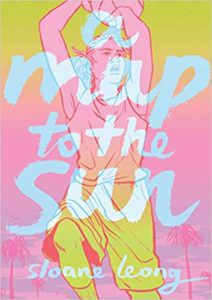 Once upon a time, Ren made a friend in Luna. Their bond was created on a beachside basketball court, but then Luna moved away and ghosted Ren. Now she’s back and she wants to pick up where they left off, but Ren has a lot going on between family drama and keeping her grades up enough so she can play on the newly formed basketball team at school. And when Luna joins the team, their relationship gets even more complicated. 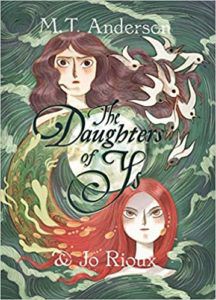 The Daughters of Ys by M.T. Anderson and Jo Rioux

In this graphic novel folk tale retelling, Queen Malgven raised walls to protest the kingdom of Ys, but no one is aware of the monsters that lurk inside the walls. When she dies, her daughters Rozenn and Dahut are left to find their own ways, different as can be. But they must come together if they’re to protect their land. 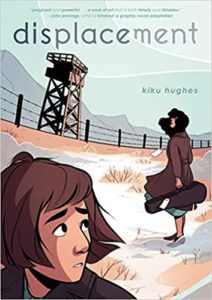 Kiku is visiting San Francisco when she’s suddenly pulled back in time to the 1940s, to the internment camp her grandmother was forced into. As the displacements into the past stretch into longer periods of time, Kiku finds herself trapped with other Japanese Americans, learning the true extent to which they were mistreated and denied their civil rights during WWII. 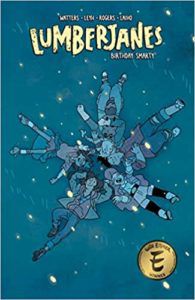 The newest Lumberjanes installment is here! It’s Jo’s birthday, and April is determined to make it the best one ever! But then her plans fall through and she decides to stage a play instead. Mal’s been tasked with keeping Jo distracted so she doesn’t discover the surprise, but when Mal does too good of a job, April’s plans might be ruined yet again. 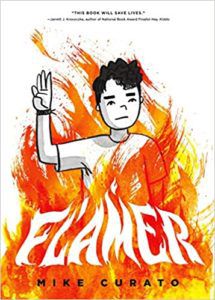 Set during the summer between middle school and high school, Aiden Navarro is having a hard time fitting in at his summer camp. He’s struggling with his sexuality, but other boys just make him nervous and afraid, especially the bullies. But he slowly begins to navigate the alliances and friendships that form during camp, and makes friends with Elias, all of which help him on his journey of self-discovery. 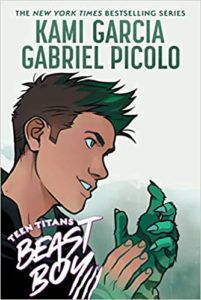 Garfield Logan has green streaks in his hair and a desperate desire to be accepted by the popular crowd. Time is running out on his senior year, so he takes a reckless dare that suddenly gets him a lot of attention. But even as his popularity skyrockets, Gar notices some weird changes happening to his body—and as the dares get bigger, Gar has to look within to find the acceptance he desires. 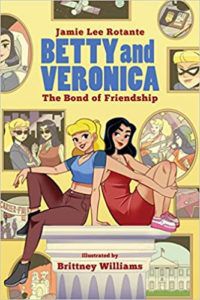 Betty & Veronica: The Bond of Friendship by Jamie Lee Rotante and Brittney Williams

In this Archie original graphic novel, Betty and Veronica are best friends who always have each other’s backs. But when a career day at Riverdale High forces them to ask big questions about their futures, these two BFFs must face that they want very different things—but that doesn’t mean they have to sacrifice their friendship, right?

Hopefully these graphic novels and comics will keep you reading all summer long!