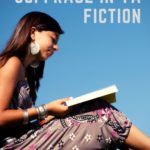 Disclaimer: the author is a Sourcebooks employee. Opinions and recommendations below are her own.

What’s with the kids these days? It seems like this refrain is all millennials have ever heard, and now it’s being touted about Gen Z as they transition to young adulthood and begin using their voices. So why now?

But it’s not exactly happening only now. Yes, Black Lives Matter and today’s internet culture show in real time how many people are part of this movement to a much wider audience. But young people have always been the instigators of change, and that is reflected in its literature. Young adult is consistently seen in publishing as the category that is the first to push boundaries, break down walls, and try new things, challenging “traditional” ideas of what young people (and not-so-young people) want to read.

Young adult books featuring girls and women fighting for voting rights illustrate how taking hold of one’s own life instead of following what’s written can be empowering and enlightening for young readers. But they also showcase much more about the women’s movement than many historical books found in classrooms, both the good and the bad sides.

The Downstairs Girl by Stacey Lee features a Chinese girl in the American South who works in a hat shop, showcasing a woman who would likely be erased from the history books on the subject or actively pushed away from the women’s suffrage movements. But in young adult fiction, Lee is able to place her character at the forefront, showing that members of minority communities were just as much part of the movement and often had to work that much harder to fight for equal opportunities like the right to vote.

Things a Bright Girl Can Do by Sally Nicholls features members of the LGBTQ+ community also taking a stand, and even though the movement likely was led at times by lesbian women, they were never explicitly allowed to live openly, whereas in fiction, especially on the young adult shelf, Nicholls is able to push boundaries and alter the story line both to include LGBTQ+ characters and to remind readers they were there all along in the original movement.

The Firefly Letters by Margarita Engle features a young woman from Sweden who travels to Cuba, expecting to find “exotic” people and wanting to learn more, but instead finds real humans who want the same things she does. This novel in particular shows how isolated America in particular is on its view of the suffrage movement, leaving out those who also fought for the same rights across the world, and the women of color who fought and didn’t earn that right until much later.

Lynda Blackmon Lowery experienced the challenge firsthand, having to march as late as 1965 for her right to vote. As the youngest person to march in the voting rights march from Selma, she went on to pen a young adult nonfiction account of the event and her own experiences, Turning 15 on the Road to Freedom.

Even books that have otherworldly elements still focus on empowering characters and readers through their narratives on equal rights. The Cure for Dreaming follows a teenage girl in Oregon in 1900 who inadvertently ends up with supernatural abilities that hinder her from ever speaking her true thoughts. But this only spurs her on, and she fights for her own right to speak up while also being part of the suffrage movement.

Suffrage appears again and again in young adult literature, showcasing diverse characters fighting for their rights to speak up and vote because of this reason, and perhaps is the most pivotal category in books to have this many books on this topic. As many teens transition to adulthood and turn 18, they soon will be able to participate in elections, so having characters they can relate to and get excited about is what makes this category so strong.

Young people have always been at the forefront of revolutions, and they’re learning it from their books.